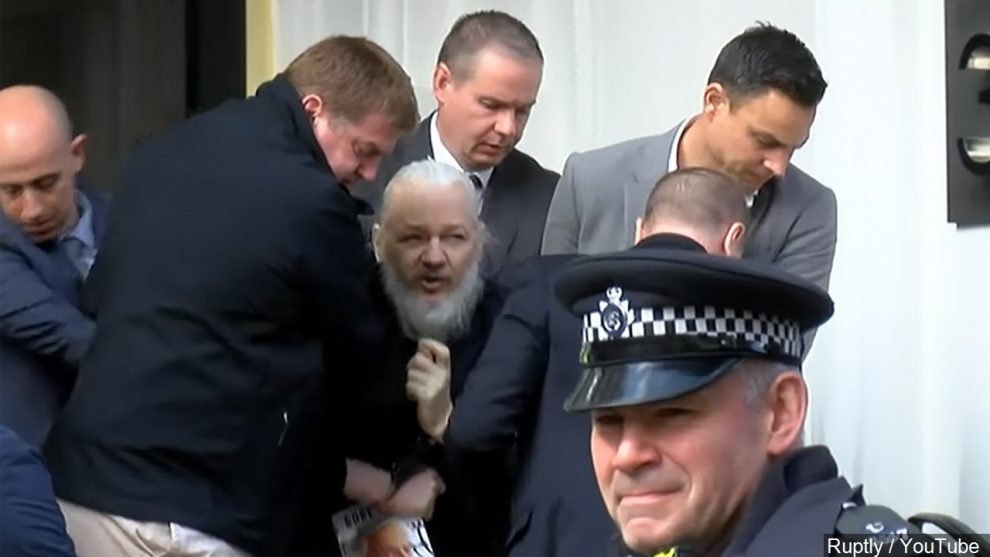 LONDON – WikiLeaks founder Julian Assange was sentenced to 50 weeks in jail for skipping bail in Britain seven years ago and seeking refuge in Ecuador’s embassy.

The sentencing comes one day ahead of a court hearing in London over a U.S. extradition request for Assange. The Department of Justice has charged him with conspiring to break into a Pentagon computer system to reveal government secrets.

It alleges that Assange, who is known for his exceptional computer hacking skills, assisted Chelsea Manning, then a soldier in the U.S. Army, in cracking a password stored on U.S. Department of Defense computers. WikiLeaks subsequently published thousands of classified U.S. military and diplomatic cables and images, including video footage allegedly showing U.S. soldiers killing civilians in Iraq.

Manning served nearly seven years of a 35-year sentence for theft and espionage for helping to deliver classified documents to WikiLeaks. Manning’s sentence was later commuted by former President Barack Obama and was released in 2017.

ournalist or criminal?: Julian Assange was notorious for leaks of US secrets

Assange was arrested last month inside the Ecuadorian embassy after the South American country revoked his political asylum. The 47-year-old Australian had sought asylum in the embassy in June 2012 to avoid extradition to Sweden, where he was wanted for questioning over rape and sexual assault allegations.

While the rape and sexual assault charges against Assange were dropped because his residence in Ecuador’s embassy stymied the investigation and because the statute of limitations expired, Swedish prosecutors have indicated that they are considering a request from one of Assange’s alleged victims to re-open the rape probe.

If that happens, Assange could face a competing new claim for extradition to Sweden.

As he arrived at Southwark Crown Court in a prison van on Wednesday, Assange raised a clenched fist. He wore a black blazer and his white hair and long beard were trimmed, a marked contrast to his disheveled appearance when he was carried out head-first of Ecuador’s embassy on April 11, looking frail and disoriented, by British police.