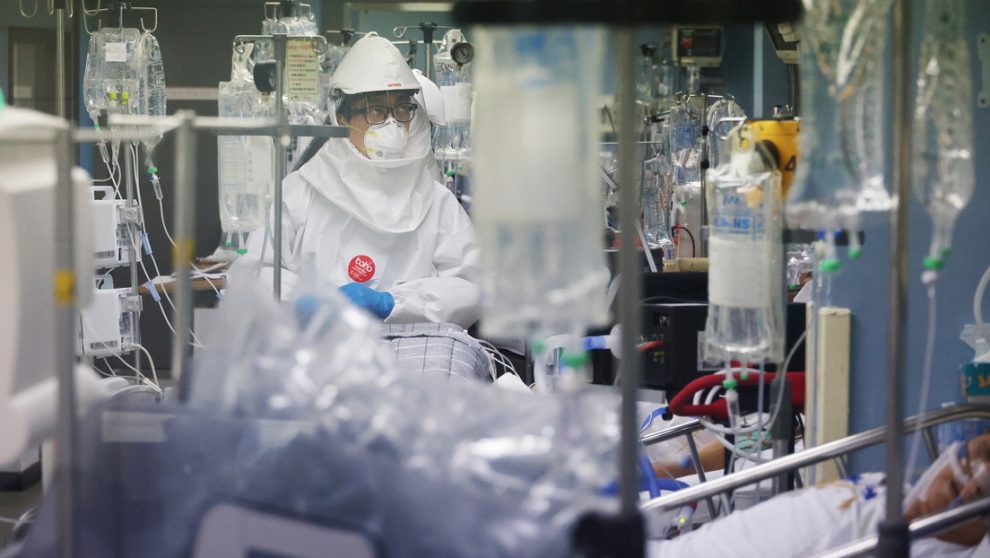 The Omicron variant has been detected in at least 38 countries but no deaths have yet been reported, the World Health Organization has said, amid warnings that it could damage the global economic recovery.

The WHO has warned it could take weeks to determine how infectious the variant is, whether it causes more severe illness and how effective treatments and vaccines are against it.

“We’re going to get the answers that everybody out there needs,” the WHO emergencies director, Michael Ryan, said.

The WHO said on Friday it had still not seen any reports of deaths related to Omicron, but the new variant’s spread has led to warnings that it could cause more than half of Europe’s Covid cases in the next few months.

“Even before the arrival of this new variant, we were concerned that the recovery, while it continues, is losing somewhat momentum,” she said. “A new variant that may spread very rapidly can dent confidence.”

A preliminary study by researchers in South Africa, where the variant was first reported on 24 November, suggests it is three times more likely to cause reinfections compared with the Delta or Beta strains.

The emergence of Omicron was the “ultimate evidence” of the danger of unequal global vaccination rates, the Red Cross head, Francesco Rocca, said.

“The scientific community has warned … on several occasions about the risks of very new variants in places where there is a very low rate of vaccinations,” he said.

“It’s unbelievable that we are still not realising how much we are interconnected. This is why I call the Omicron variant the ultimate evidence.”

Uğur Şahin, the CEO of BioNTech, which makes the Covid vaccine with Pfizer, said the company should be able to adapt the shots relatively quickly. He said current vaccines should continue to provide protection against severe disease, despite mutations.

“I believe in principle at a certain timepoint we will need a new vaccine against this new variant. The question is how urgent it needs to be available,” Şahin said.

In the US, six more states confirmed infections of the Omicron variant on Friday.

New Jersey, Maryland, Missouri, Nebraska, Pennsylvania and Utah each reported their first cases of Omicron. It has also been found in California, Colorado, Hawaii, Minnesota, and New York. The Centers for Disease Control and Prevention said it was investigating possible cases of the Omicron variant in other states.

Australia on Friday reported three students in Sydney had tested positive for the variant, despite a ban on non-citizens entering the country and restrictions on flights from southern Africa.

Canada has discovered a total of 15 cases of the new Omicron variant. On Friday the chief public health officer, Theresa Tam, announced 11 Omicron cases, all involving people who had recently travelled abroad.

Hours after she spoke, the city of York said a child under 12 had been diagnosed with Omicron. The child had recently traveled to southern Africa. Toronto then reported its first three cases of Omicron late on Friday, with two of those individuals having recently returned from Nigeria, while another individual had returned from Switzerland.

In Norway, officials said at least 13 people who contracted Covid-19 after an office Christmas party in Oslo last week had the Omicron variant – though so far they have only had mild symptoms.

But the government ushered in restrictions in greater Oslo after fears of the cluster surfaced.

The 5,352 new cases marked the third time this week the daily tally exceeded 5,000. The country’s death toll was at 3,809 after a record 70 virus patients died in the past 24 hours, while the 752 patients in serious or critical conditions were also an all-time high.

The country’s Omicron caseload is now at nine after three more cases were confirmed, connected to a couple who had arrived from Nigeria on 24 November. Officials say the number of Omicron cases could rise as some of the patients had attended a church gathering involving hundreds of people on 28 November.

Belgian authorities said on Friday that primary schools would close a week early for the Christmas holidays.

Ireland said it will close nightclubs and reintroduce social distancing in some settings over Christmas and the New Year.

Meanwhile in Brazil, a supreme court justice has ordered that the president, Jair Bolsonaro, be investigated for comments linking Covid-19 vaccines to Aids – an assertion rejected by doctors and scientists.

Bolsonaro said in a video in October that “official reports from the UK government suggest that fully vaccinated people … are developing acquired immunodeficiency syndrome much faster than anticipated”. Facebook and Instagram took down that video days later.

The Brazilian president, who remains unvaccinated and has frequently pushed against vaccine mandates, argued he was merely quoting an article in the magazine Exame and not making assertions.

Moraes said in his ruling that Bolsonaro “used the modus operandi of mass dissemination schemes in social networks”, which requires further investigation.

Aras, however, rarely goes against the president and has not opened an investigation into Bolsonaro’s handling of the pandemic despite calls to do so by the Senate committee.