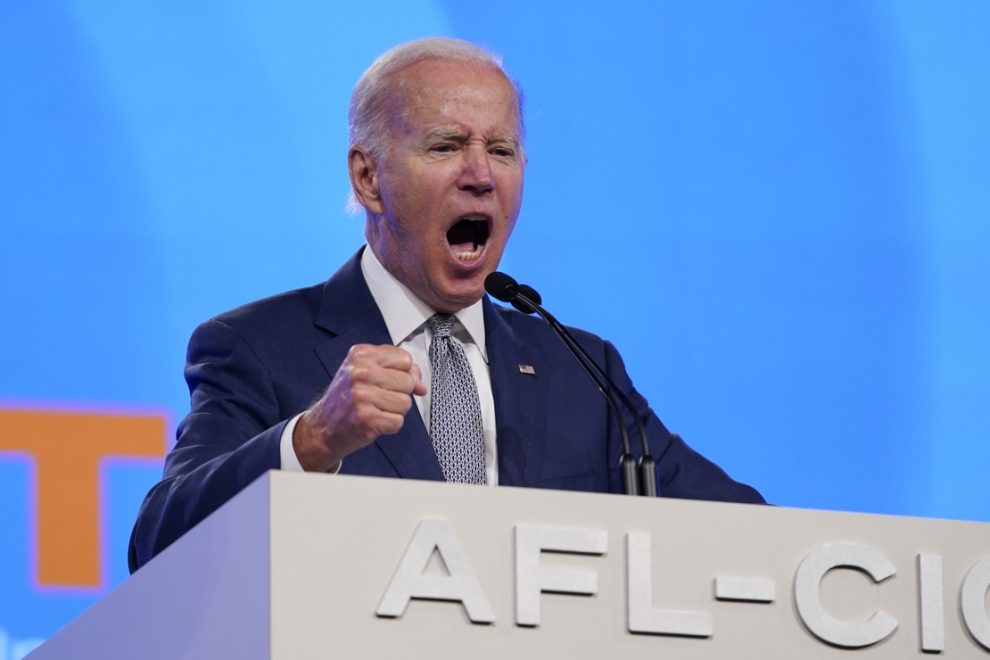 For my money, the Biden administration has been the most incoherent and disjointed of the modern era, and that qualifier is only included due to a lack of recorded detail prior. Press consternation over the “chaos” inside the former Trump administration seems laughably quaint now, as the current White House sets records for staff turnover.

No one seems to know what’s going on, and that includes the president himself. Every public appearance just accentuates the dysfunction. Biden and his handlers are constantly reacting. Leadership and forethought are concepts so foreign that they might as well be of alien origin.

Even the brightest minds would have a hard time keeping things together in such an environment, and the Biden administration is certainly not full of the brightest minds. That’s not just a complaint from the right, either. The Democrat base is growing restless, and the divisions are now exploding into the open, with the White House going weapons hot in response.

“Joe Biden’s goal in responding to Dobbs is not to satisfy some activists who have been consistently out of step with the mainstream of the Democratic Party.” https://t.co/7HmSXD7wIh

Huddling with top aides, including some who dialed in from the White House, Biden declared at the outset of the call that he wanted to endorse ending the Senate filibuster to codify Roe into law, a position he so far had refused to take, angering many Democrats in the process.

But Biden kept his decision private until three days later when, during a news conference in Madrid, he deployed the carefully crafted language he and his team had perfected just moments before, denouncing the “outrageous behavior of the Supreme Court” and calling for “an exception to the filibuster for this action to deal with the Supreme Court decision.”

For many Democrats, however, it was too little and too late — just one more example over the two weeks in which Biden and his team struggled to come up with a muscular plan of action on abortion rights, even though the Supreme Court ruling had been presaged two months earlier with the leak of a draft opinion.

There are a few more pieces of the Post’s article that are worthy of discussion, but the general theme revolves around the Biden administration being 1) consistently tardy on issues and 2) unwilling to go “all the way” on policy.

Both complaints come from a Democrat base that is sick of losing and only sees more of it on the horizon. In that sense, the White House is stuck between a rock and a hard place. They have courted and kowtowed to radicals for so long that they are now beholden to them. How do you tell people who see Alexandria Ocasio-Cortez as an intellectual giant that you simply don’t have the power to give them what they want?

The White House’s message that Republicans are a “threat to democracy” hasn’t helped either. When you tell your voters that the other side isn’t just wrong but is dangerous, you build up an expectation that everything is on the table to defeat them. Boundaries are no longer respected, and Biden certainly isn’t going to get credit for their existence.

But while the Democrat base lashes out, the White House is now lashing out back.

White House officials defend the urgency of Biden’s response and the actions he has taken on abortion, which they argue are in step with mainstream opinion. “The president has been showing his deep outrage as an American and executing his bold plan — which is the product of months of hard work — ever since this decision was handed down,” White House communications director Kate Bedingfield said in a statement Saturday.

“Joe Biden’s goal in responding to Dobbs is not to satisfy some activists who have been consistently out of step with the mainstream of the Democratic Party. It’s to deliver help to women who are in danger and assemble a broad-based coalition to defend a woman’s right to choose now, just as he assembled such a coalition to win during the 2020 campaign,” she said.

Overpromising and underdelivering is a terrible political strategy, and eventually, it catches up with any politician who tries it. There’s a reason first mid-terms are so historically bad for new presidents. The excitement of entering office is quickly quelled by the realities of the US constitutional system. Ironically, Kate Bedingfield, who made the derogatory statement about Democrat activists, is leaving the White House, further underscoring the disarray.

Watching the Biden administration is like watching a car crash in slow motion. You know how it ends but you just can’t look away, and every moment has you cringing. How does this get fixed? The simple answer is that it doesn’t. The man at the top is senile, the base he relies on is angry, and those around him wouldn’t know a coherent message if it punched them in the face. Things only get worse from here.