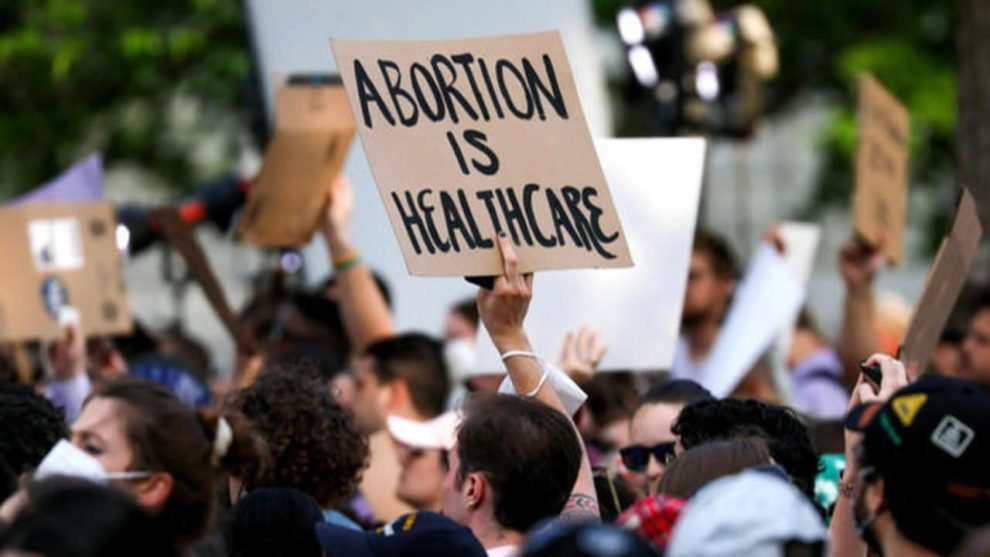 The White House on Thursday declined to encourage abortion activists to avoid protesting at the private residences of Supreme Court justices as outrage over a leaked draft opinion overturning Roe v. Wade grows.

“The president, for all those women, men, others who feel outraged, who feel scared, who feel concerned, he hears them, he shares that concern and that horror that he saw in that draft opinion,” Psaki said.

Biden’s message directly to anyone feeling outraged “is participating in peaceful protest,” Psaki said. “Ensure it’s peaceful. Have your voice heard peacefully. We should not be resorting to violence in any way, shape or form.”

Several heated protests have occurred in front of the Supreme Court in Washington, D.C., following the leak of Justice Samuel Alito’s draft opinion that would undo Roe, prompting police to put up barriers around the building.

Fox News’ Peter Doocy on Thursday brought up Biden’s statements earlier this week calling the “MAGA crowd” the “most extreme political organization” in recent history. “Do you think the progressive activists that are now planning protests outside some of the justices’ houses are extreme?” Doocy asked Psaki.

“Peaceful protest, no. Peaceful protest is not extreme,” Psaki said. “We certainly encourage people to keep it peaceful and not resort to any level of violence.”

Doocy pressed whether Biden viewed the posting of home addresses of justices, some of whom have young children, as a peaceful expression of protest.

“The president’s view is that there’s a lot of passion, a lot of fear, a lot of sadness, from many, many people across this country about what they saw in that leaked document,” Psaki said.

A pro-abortion group reportedly plans to protest at the Maryland and Virginia homes of some of the Supreme Court justices. In response to Doocy’s question about whether the president cared about protests near justices’ homes, Psaki declined to discourage any residential protests.

“I don’t have an official U.S. government position on where people protest,” Psaki said. “We want it of course to be peaceful, and certainly the president would want to people’s privacy to be respected. But I think we shouldn’t lose the point here. The reason people are protesting is because women across the country are worried about their fundamental rights that have been law for 50 years, their rights to make choices about their own bodies and their own health care, are at risk. That’s why people are protesting — they’re unhappy, they’re scared.”

Psaki again declined to state whether Biden supported any limits on abortion, even up until the moment of birth.

“Our 6-3 extremist Supreme Court routinely issues rulings that hurt women, racial minorities, LGBTQ+ and immigrant rights,” the group’s website read. “We must rise up to force accountability using a diversity of tactics.”

The leaked draft of the opinion on Dobbs vs Jackson Whole Women’s Health was published by Politico Monday evening, and indicates that a majority of the court may vote to undo 50 years of precedent in Roe. However, the draft is not the final opinion, which is expected in late June or July, before the current Supreme Court term ends.