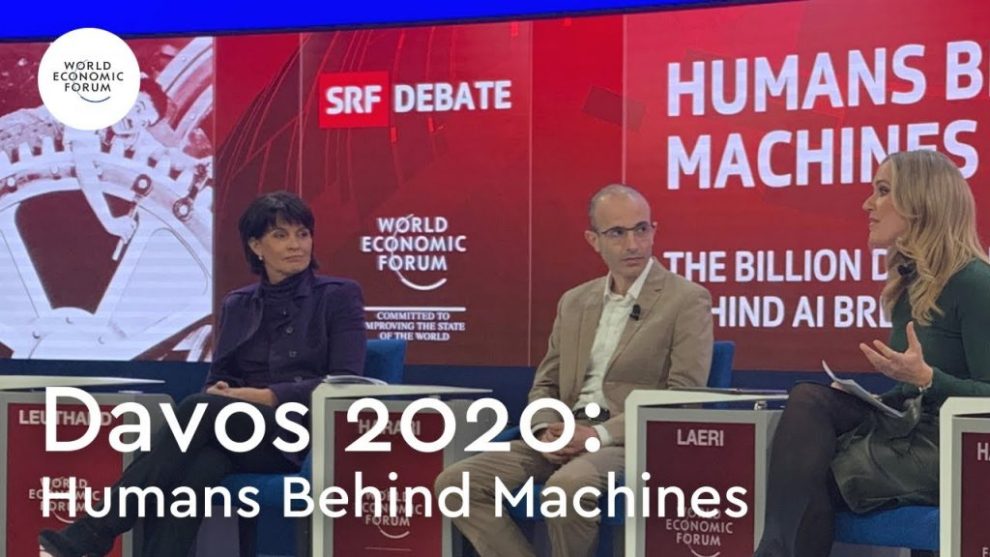 WEF transhumanist Yuval Noah Harari – who recently declared that the techno-hell he’s constructing doesn’t need “the vast majority of the population” – has returned to demand that the serfs offer more tribute to their overlords for “climate change.”

CNN news actor Bill Weir, who facilitates the discussion, gets things started by sycophantically slobbering all over Harari in his introduction, fawning over his supposed genius.

In this manner, Weir offers an unintentional, powerful insight into just how influential WEF leadership actually is within the corporate media: the mere opportunity to toss Harari softball questions fills him with childlike excitement.

Weir then introduces, albeit much less enthusiastically, a special guest, the obligatory Climate Change Person of Color©—fresh-faced, barely-legal “climate activist” Vanessa Nakate, who, as Weir explains, “focuses on how the climate crisis is exacerbating gender equality.”

Climate crisis —> gender inequality: imagine connecting those dots! It certainly takes creativity, so credit where credit is due. The girl clearly has a healthy imagination.

Nakate rose to prominence a couple of years back when the white supremacists at the Associated Press cropped her out of a photo taken with Greta Thunberg and some other super-impressive climate activists doing God’s work at Davos.

Of course, everyone knows there’s never any explanation for anything, including photo edits, other than racism.

At 3:50, Harari laments the global “despair” in the zeitgeist vis-à-vis “climate change.” He acts surprised – as if his organization’s nonstop fearmongering over COVID, “climate change,” and all other manner of existential crises (not to mention its project to shunt us all into techno-tenement housing) could produce any other reaction besides despair, fear, or hostility.

Harari at 4:20 explains that 2% of global GDP is a reasonable amount for his WEF sponsors to further extract from the economy to fight “climate change.” He warns that if you don’t agree right away, we’re all going to die a miserable collective death. He reminds the viewer, like any good high-pressure shyster salesman would, that there’s no time to think.

(Global GDP in 2022 is projected to be $103 trillion dollars. Two percent of that figure is about $2 trillion, give or take a few billion.)

Interestingly, neither Harari nor the CNN actor, Bill Weir, get around to explaining:

…or any of the mechanics, actually.

The important thing is to shut up and write the check. The details will take care of themselves.

How ironic! Harari claims the technocrats don’t need the “vast majority” of peasants anymore – but they would certainly like to commandeer their cash!

At 22:00, we get down to brass tacks when the political rhetoric heats up, betraying the true motivations of the “climate change” agenda – which has nothing, in reality, to do with environmental protectionism.

Using the strange Bill Gates floppy arms common to these people, Harari dives into one of his favorite talking points: demonizing populist nationalist leaders in the vein of Trump, Jair Bolsonaro of Brazil, and Viktor Orban of Hungary – the only political movement capable of pushing back against his agenda.

The saddest aspect of this propaganda effort, perhaps, is the spectacle of the Ugandan university girl – a significantly more pleasant, less autistic version of Greta Thunberg. Unless she is an even more gifted sociopath than other actors in the “climate change” movement, Katane, by all appearances, means well. But she’s in way over her head.

She has no idea that the only reason she is there is for Harari and the CNN news actor to cynically weaponize her idealistic, ethnically diverse avatar to further their scam.

She actually apparently earnestly believes she is leading some kind of brave, grassroots rebellion movement against power when, in reality, she is serving it.

Young people, by simple virtue of their dearth of real-world experience, don’t know much. More importantly, they don’t know what they don’t know. Predators like Harari make quick work of them.

The WEF social engineers frequently attempt to invert the narrative in this manner. Harari plays the game in this summit interview: “There is a very big danger that, with climate change, the population might divide into the majority who suffers, and the minority who can protect themselves.”

The “minority,” in his conceptualization, is any nationalist who opposes his global, borderless technocracy.

He continually refers to “the powerful” in reference to national political leaders in opposition to the global “climate change” agenda, as if he is not the top lieutenant of the most powerful multinational organization in the world.

This is, to emphasize, Harari’s transparent attempt to subvert political opposition by hoodwinking enough gullible (mostly young) people into believing the WEF is actually Robin Hood. The reality is the inverse: the WEF serves the interests of the elite of the elite – the Bill Gates and Jeff Bezos of the world.

They camouflage themselves in a cloak of the popular folk-hero archetype to try to claim the moral high ground. They are, in every sense, Goliath, but play the role of David on the world stage – a direct and, sadly, highly effective ploy to pull on the heartstrings of liberals, who value weakness and victimhood as the highest virtues.