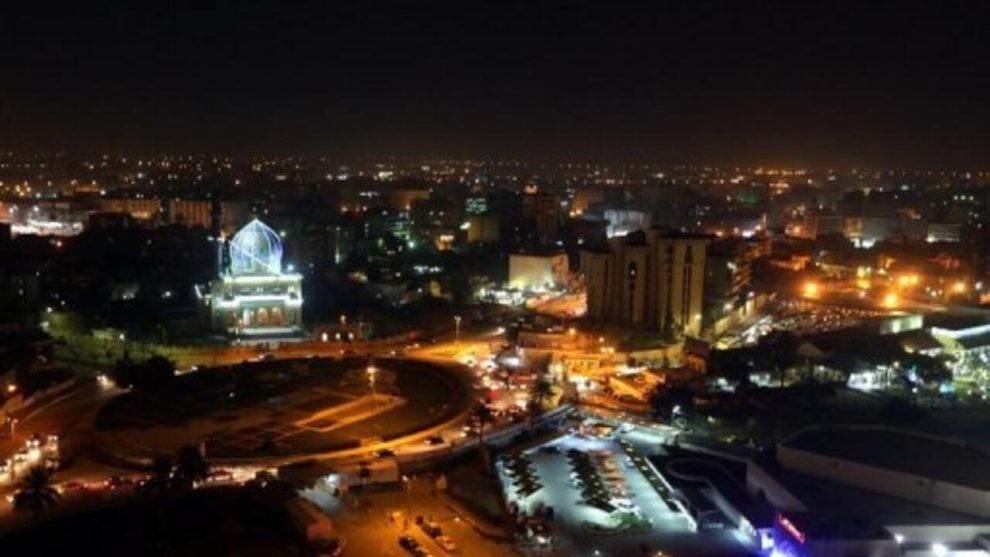 The American embassy in Baghdad has reportedly engaged inbound rocket attacks with its air defense system, the C-RAM which protects aerial threats against the Green Zone.

Some reports suggest the streets have finally grown calmer in the early morning hours (local time), but this is after an evening and overnight death toll of at least 15, including unconfirmed reports of police casualties. AFP citing local medical sources also says some 350 protesters were injured.

Currently the Kuwaiti embassy in Iraq is urging all of its citizens to leave the country, and its likely that more regional and gulf states will follow, especially if violence spreads to other provinces.

Below: a brief collection of videos from some of the night’s chaotic scenes of clashes between pro-Sadr protesters, rival militant factions, and security forces…

Breaking News: Oil has gone up 4% since the start of the armed clashes in Iraq

What’s also ironic is that Iran provided most of the Katyusha Rockets to the Shia Militias who are now launching them at the Iranian Embassy in Baghdad. Biting the hand that feeds.

Well, that explains the C-RAM going off in the Green Zone https://t.co/sRZthwWzfT

By all accounts the situation into the overnight hours (local time) Baghdad has continued to spiral, with one well-known regional Mideast correspondent describing a “full implosion” – despite security forces attempting to enforce a strict curfew meant to clear the streets. The Republican Palace, which is where Iraq’s gridlocked parliament meets (though which has now been suspended by acting prime minister Mustafa al-Kadhimi), was occupied by armed protesters earlier in the evening.

CNN reports of the latest, “At least five people have been killed and more than 40 have been injured in violent clashes that erupted in Baghdad’s heavily fortified Green Zone on Monday, following an announcement by powerful Iraqi Shia cleric Muqtada al-Sadr that he was withdrawing from political life, medical sources told CNN.” Earlier, though unconfirmed reports, said at least eight had died amid clashes with police. These numbers were quickly updated and the death toll is expected to go higher into the night: At least 12 protestors killed (AFP), 2 security members killed (Arabiya). State trying to impose a curfew but situation is out of hand. Protestors aggravated by status quo, militias roaming Baghdad, Gov MIA… Long night for Iraq,” Joyce Karam summarizes.

In a twisted bit of tragic irony, all of this is of course happening the very week, almost to the day, of another anniversary and grim legacy of America’s two-decade long ‘war on terror’…

Baghdad is about to become the next Kabul.

Pro-Sadr protesters were earlier seen taking over the swimming pool at the iconic Republican Palace built by Saddam and kept in tact after the 2003 US invasion.

More video to emerge showing just how intense ongoing clashes among political factions and with police are:

The White House is addressing viral video which purported to show a military helicopter on top of the US Embassy in Baghdad following Iraqi protesters breaching the high-secure Green Zone.

“Reports of an Embassy evacuation are false. Ensuring the safety of US government personnel, US citizens, and the security of our facilities remains our highest priority,” a White House official said in the hours after the security situation unraveled. The official called reports of violent confrontation with police “disturbing” after a curfew for the Iraqi capital went into effect.

“Now is the time for dialogue, not escalated confrontation,” the official said. “We join the call by parties across the Iraqi political spectrum to remain calm, abstain from violence, and resolve their political differences through a peaceful process guided by the Iraqi constitution.”

Though little is confirmed, there are reports of several killed as videos of gun fights continue to emerge. Currently there are reports that pro-Sadr militants are roaming around Tahrir Square and near the Green Zone at the moment, with key government buildings also having been breached.

AFP is reporting that an exchange of gunfire has been observed as dozens or possibly hundreds of supporters riot, with police using riot control measures like water cannons to repel an attack on the Green Zone. There are unconfirmed reports that the sprawling and iconic Iraqi Republican Palace has been forcibly breached with protesters inside.

The fresh unrest appears to be in response to Sadr being pressured to exit politics, with the influential Shia cleric tweeting earlier in the day, “Earlier I decided that I would not interfere in political affairs. And now I announce my final retirement (from politics) and the closure of all institutions (belonging to the Sadr movement).”

The past months have witness periodic unrest as Shia factions struggle to form a government, which has also resulted in sporadic violence amid gridlock in parliament. Against this backdrop, for the last two years pro-Iran militia groups have launched occasional rocket attacks on US bases and even at times the heavily fortified American embassy. Sadr’s supporters believe there’s a conspiracy against him.

Though as yet unconfirmed from the US side, there are widespread reports that the United States Embassy which is located inside the Green Zone is currently being evacuated.

The US embassy employees have been evacuated from the #Green_Zone by the helicopter.#Baghdad, #Iraq pic.twitter.com/HLZerzb0ja

Convoys of international vehicles have also been seen speeding from the areas of unrest, exiting the confines of the Green Zone.

Below are some developments according to Iraqi war correspondent Ali Almikdam:

IRAQ FUTURE CENTER describes Al-Sadr’s recent statement to disavow himself from any escalatory steps taken by his audience, including storming the republican palace in #Baghdad, and the political chaos within the international zone in Baghdad.
1/5 pic.twitter.com/VtVOQSUIMo

Purported footage of protesters breaching the symbolic seat of government for the Iraqi state, which is at the heart of the walled Green Zone: