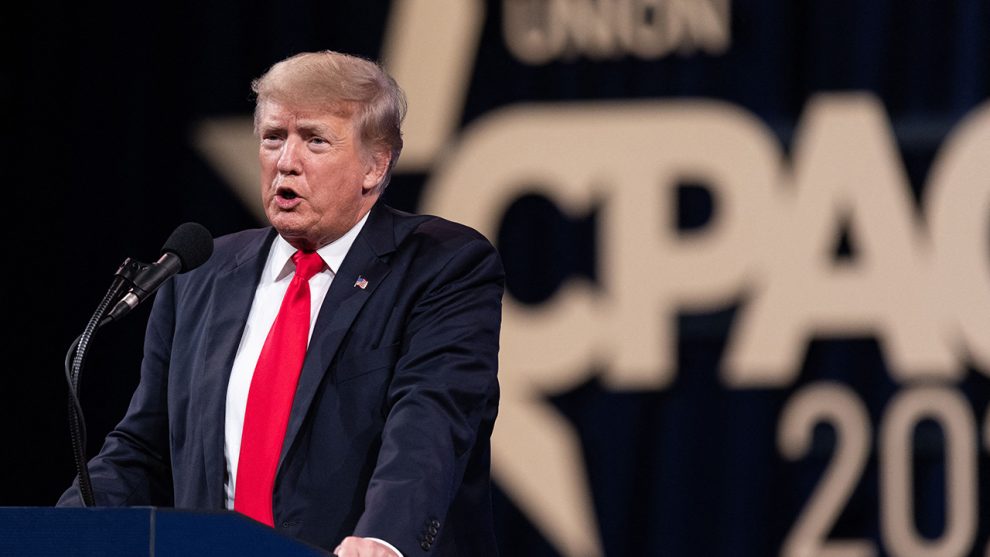 Trump, who’s repeatedly teased making another presidential run in 2024 to try and return to the White House, captured 69% of ballots cast in the anonymous online straw poll, according to results announced by CPAC on Saturday.

The support for the former president, who remains the most popular and influential politician in the Republican Party and continues to play a kingmaker’s role in GOP primaries, is up from his 59% showing in the anonymous online straw poll at the CPAC gathering in Orlando, Florida in February.

Florida Gov. Ron DeSantis came in second on the 2024 presidential nomination question, at 24%, down from his 28% showing at CPAC in Orlando five months ago.

DeSantis has seen his popularity surge among Republican voters in his state and around the nation over the past two and a half years, thanks in large part to his relentless pushback against COVID-19 restrictions amid the coronavirus pandemic as well as his aggressive actions in the culture wars.

While DeSantis has repeatedly deflected talk of a potential run for the 2024 Republican presidential nomination, political pundits view him as a potential White House contender.

The CPAC Texas straw poll results were released just ahead of the confab’s keynote speech by Trump. DeSantis, who appeared at the Orlando conference earlier this year, did not attend the Texas gathering.

Sen. Ted Cruz of Texas, who spoke Friday at the conference, grabbed 2% support on the straw poll ballot. No one else among the 21 names listed on the ballot topped one percent.

“President Trump remains the most dominant force in American politics, and as yet another poll shows, it’s a reality that will propel the growth and success of the Republican Party through the Midterms and beyond,” Trump spokesman Taylor Budowich told Fox News after the results were released.

The 2024 straw poll also included a second list without Trump. His name was replaced by his eldest son, Donald Trump Jr.

DeSantis topped the second 2024 ballot, at 65%. Donald Trump Jr. grabbed 8% support, with Cruz at 6% and former Secretary of State Mike Pompeo at 5%. No one else topped two percent on the second ballot question.

The former president’s strong performance on the unscientific survey comes as no surprise. CPAC, long the largest and most influential gathering of conservative leaders and activists, has become a Trumpfest since his 2016 presidential election victory.

In a separate question on whom CPAC attendees would like to see as Trump’s running mate in 2024 if he launches a campaign, DeSantis grabbed 43% support, with South Dakota Gov. Kristi Noem at 9%, and Pompeo at 7%.

No one else topped four percent on the running mate ballot question.

Voting on the CPAC Texas straw poll ballot was only open to attendees of the confab, with voting once again conducted through the CPAC app.

Matt Schlapp, chairman of the American Conservative Union, which runs CPAC, said “there’s an unbreakable bond between President Tump and the conservative movement. He simply did the things he promised to do and for that they are grateful.”

McLaughlin, who’s been attending CPAC for decades, said that “just like back in the old days when Ronald Reagan defined and was setting the tone for the conservative movement, it’s the same thing right now with Donald Trump.”