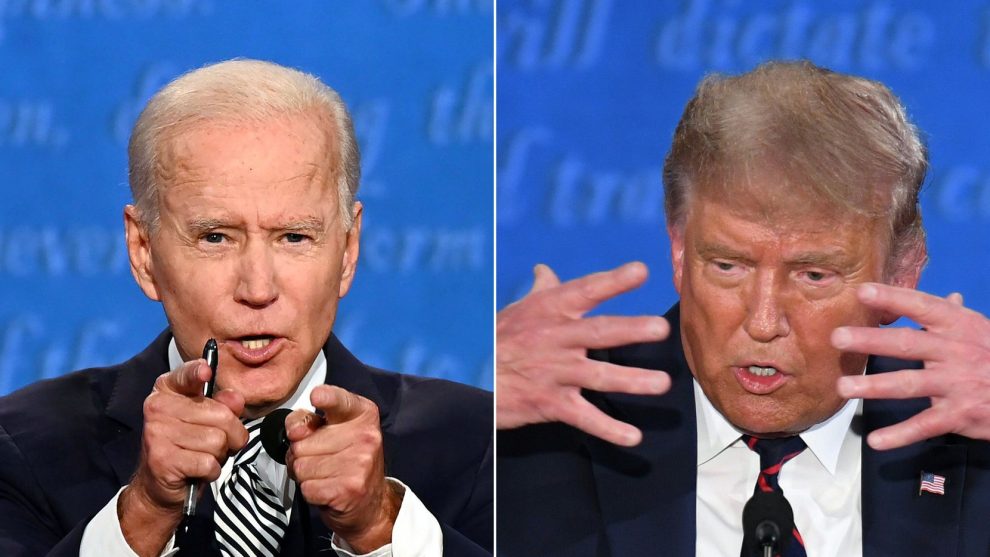 White House and campaign aides on Wednesday struggled to clean up President Trump’s comments a night earlier in which he declined to explicitly condemn white supremacy, instead directing a far-right group to “stand back and stand by” during the first presidential debate.

Trump’s comments about the Proud Boys, a far-right militia group, dominated headlines the morning after the debate.

Multiple Trump surrogates faced questions about the remarks during cable news hits, where they downplayed his calls for the group to “stand by” and pointed to the president’s past denunciations of white supremacists.

“He’s told them to stand back. This president has surged federal resources when violent crime warrants it in cities. He’s leading. He doesn’t need any sort of vigilantism,” she continued. “That’s never what we’ve called for. What we’ve called for is Democrat mayors and Democrat governors to call up the resources we’re prepared to make available.”

Pressed on if Trump missed an opportunity to condemn white supremacy, Farah noted that the president said “sure” when asked at the outset whether he would tell white supremacists to “stand down.”

“What the president’s referring to there is when we see unrest in our streets and private citizens try to defend themselves or their businesses, that’s a right that they have,” she added.

Hogan Gidley, the national press secretary for the Trump campaign, was more forceful in his own condemnation of the Proud Boys and his interpretation of the president’s words.

Multiple Trump allies have argued that Trump has on multiple occasions condemned white supremacist groups. The president has in fact done so, including in the aftermath of a mass shooting in El Paso, Texas, last year, but he has typically only denounced them after being repeatedly coaxed to do so.

On the debate stage on Tuesday night, however, Trump stopped short.

Moderator Chris Wallace asked if Trump was willing to condemn “white supremacists and militia groups and to say that they need to stand down.”

Trump responded that he would be willing to, but when Wallace and Democratic nominee Joe Biden urged him to actually do it, the president asked for a name of a group to condemn.

“Proud Boys, stand back and stand by,” Trump said after Biden named the far-right group. “But I’ll tell you what, somebody’s got to do something about antifa and the left.”

The group’s Telegram account took Trump’s remarks as an order. “Standing down and standing by sir,” the account wrote.

A prominent Proud Boy posted on conservative Twitter-alternative Parler that “Trump basically said to go f— them up! this makes me so happy.”

“President Trump told the proud boys to stand by because someone needs to deal with ANTIFA… well sir! we’re ready!!” the organizer added.

Founded by Vice Media co-founder Gavin McInnes in the midst of the 2016 election, the Proud Boys are known for their white nationalist pandering, blatant anti-Muslim rhetoric and close ties with more publicly violent extremists.

The male-only group, named after a song from the “Aladdin” musical, gained national prominence for its involvement in the 2016 Unite the Right rally in Charlottesville, Va. It has staged multiple counter-rallies aimed at disrupting the anti-police brutality protests that have swept the country since the police killing of George Floyd in May.

Trump’s invocation of “antifa” to dodge condemning white supremacists fits into a pattern of the president trying to equivocate right- and left-wing violence. Antifa, short for anti-facist, refers to a loose collection of primarily far-left activists. FBI Director Christopher Wray in a hearing earlier this month pointed out that the term refers to an ideology, not an organization.

The president’s reluctance to unequivocally condemn white supremacists on the debate stage exasperated some of his allies on Wednesday.

Former Pennsylvania Sen. Rick Santorum (R) called it a “huge gaffe,” while Fox News host Brian Kilmeade lamented that Trump whiffed on “the biggest layup in the history of debates” by failing to condemn white supremacy.

Sen. Tim Scott (S.C.), the lone Black Republican in the Senate, said the president should “correct” his comments.

“I think he misspoke. I think he should correct it. If he doesn’t correct it, I guess he didn’t misspeak,” Scott said.