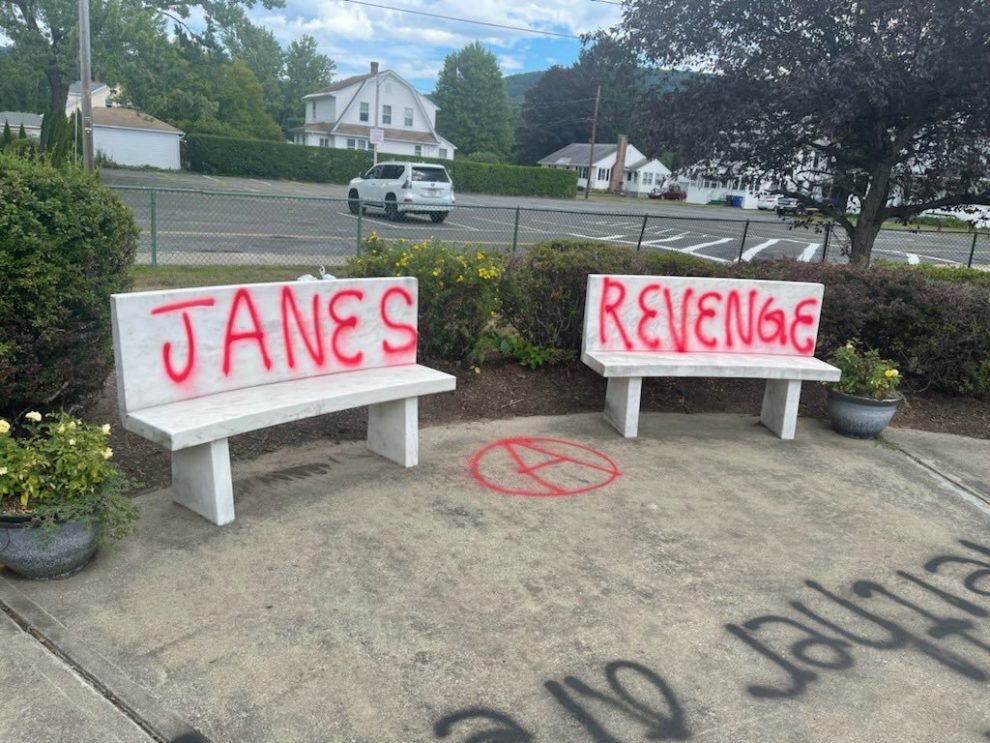 Since the leak of Justice Samuel Alito’s draft majority opinion in the Dobbs v. Jackson Women’s Health Organization case that eventually led to the overturning of Roe v. Wade, America has endured a “Summer of Rage.” The wave of demonstrations saw protesters going far beyond simply donning “Handmaid’s Tale” bonnets and gathering around the Supreme Court. There have been dozens of acts of violence, destruction, and harassment aimed at intimidating anti-abortion Christians and conservatives. In this series of articles, we identify key players, organizations, and locations in this radical movement. We will also explain elements of the interconnected system that provides organizational and/or financial support for this radical agenda.

This procession of hate crimes has been ongoing throughout the publication of the Summer of Rage exposé, which is now in its sixth installment. Just this week, we saw what appears to be yet another example. Vandals scrawled the threat “if abortions aren’t safe, neither are you,” as well as the words “Jane’s Revenge,” in red paint at the Bethlehem House pregnancy care center in Easthamptom, Massachusetts. Jane’s Revenge is the name of one of the amorphous groups of radical leftists that has been the subject of this series.

Pro-life pregnancy centers provide resources for families and encourage them to choose life for their unborn children. Bethlehem House is run by volunteers and provides wipes, car seats, strollers, blankets, clothing, and other essentials for young children.

They also give away blessed rosaries, which The Atlantic recently likened to “assault weapons.”

On June 25, 2022 alone, the day after Roe v. Wade was overturned, there were attacks on eight churches, eight pregnancy centers, and a government building.
These attacks have generated minimal acknowledgement, much less a response, from the Biden administration and federal law enforcement, who steadfastly track—and prosecute—incidents targeting abortion providers.

Radical pro-abortion activists like Ruth Sent Us routinely trade in anti-Christian rhetoric. Jane’s Revenge, which has claimed responsibility for a number of attacks nationwide, has repeatedly targeted church-affiliated pregnancy centers and churches. Ruth Sent Us, which made headlines organizing protests at the homes of Supreme Court justices, specifically targeted the “six extremist Catholics” on the Supreme Court (though Justice Gorsuch was raised Catholic, he is thought be a practicing Protestant). The group encouraged followers outside of the Washington, D.C., area to demonstrate “at or in a local Catholic Church.”

To drive home the anti-Christian undertones, the group even targeted President Biden on account of his faith. On TikTok, Ruth Sent Us targeted Biden for allegedly being a “devout Catholic,” directing protestoes to his Rehoboth Beach vacation home purely because of his religion:

FACE IT: We have a devout Catholic President who’s personally anti-abortion. He won’t even say “abortion”. He needs to be pressured to #AvengeRoe.

In reality, the Biden administration has mostly ignored religious objections to abortion. In a June roundtable discussion on abortion, Vice President Kamala Harris explained to a group of religious leaders that

[t]o support Roe v. Wade and all it stands for, does not mean giving up your beliefs… It is simply about agreeing that a woman should be able to make that decision with her faith leader, with her family, with her physician. And that the government should not be making that decision for her.

Later, in a July speech, Harris said “It’s important to note that to support a woman’s ability — not her government, but her — to make that decision does not require anyone to abandon their faith or their beliefs.”

And, although the violent pro-abortion group Jane’s Revenge is reported to be under investigation by the NYPD’s Hate Crimes task force, the Justice Department has been slow to take up the cause, despite public outcry and pressure from Congress.

The following are just a few particularly noteworthy attacks (of many), listed in chronological order:

May 3: Sacred Heart of Mary Catholic Church in Boulder, Colorado was vandalized with “My Body My Choice” graffiti. This appears to be the first attack on a church after it was leaked that Roe v. Wade was going to be overturned. It was the second time in less than a year that Sacred Heart of Mary had been vandalized, and it’s one of 30 local churches that had been vandalized in the last two years. Windows were smashed and religious statues and sculptures were defaced, with the damages estimated at around $10,000.

May 5: St. Joseph’s Church and Academy in Armada, Michigan, was vandalized.

Another Catholic Church vandalized in America.

This was at St. Joseph’s Church in Michigan yesterday… pic.twitter.com/Eu25vnX2Nb

May 22-25: St. Michael’s Catholic Church, Harbor Church, Calvary Chapel, and the Church of Jesus Christ of Latter-Day Saints in Olympia, Washington, were vandalized. An anarchist group took credit for the attacks, threatening that “[i]f abortions aren’t safe, then neither are you.”

May 29: St. Augustine Catholic Church in Brooklyn, New York, had its priceless tabernacle stolen, the Holy Eucharist thrown on floor, and statues of angels on the altar decapitated and destroyed. Burglars broke into the church, decapitated and destroyed statues of angels on the alter, and then stole the church’s historic tabernacle, which police valued at $2 million. The tabernacle was used to house the Eucharist that was delivered to the sick and the homebound.

June 28: St. Louise Catholic Church in Bellevue, Washington, was spray-painted with anti-Catholic messages, its windows were broken, and a church employee was assaulted.

Officers arrested a 31yo Bellevue resident on suspicion off a hate crime and assault after allegedly spray painting St. Louise Parish, smashing two doors and assaulting an employee. The suspect was arrested without incident. pic.twitter.com/1UsDavNx08

Earlier this month, Biden signed an executive order supporting out-of-state travel for abortions. According to the Associated Press, the President laid “the groundwork for Medicaid to help women seeking abortions to travel between states to obtain access to the procedure.”

Most of the churches attacked have been Catholic, but there have also been confirmed attacks on Eastern Orthodox, Methodist, African Methodist Episcopal, Baptist, and Mormon churches.

Even the New York chapter of the Council on American-Islamic Relations (CAIR) issued a statement condemning a pro-abortion group’s attack on a local Catholic Church:

The New York chapter of the Council on American-Islamic Relations (CAIR-NY) today condemned threatening graffiti that was scrawled on an Upper West Side church’s door, which ominously read, “If abortion isn’t safe, neither are you.”

Afaf Nasher, the executive director of CAIR-NY, said in the statement:

We condemn vandalism in all its forms, but when houses of worship are targeted with threats of violence and symbols of white supremacy and genocide, we cannot remain silent. We must do more to protect the sanctity of our churches, synagogues, mosques, and other sacred spaces.

In June, the FBI announced it was investigating “a series of attacks and threats targeting pregnancy resource centers and faith-based organizations across the country,” after facing outcry from conservative lawmakers and religious leaders. Details as to the nature and scope of the investigation have been sparse.

According to the Justice Department, the Freedom of Access to Clinic Entrances (FACE) Act, a 1994 law restricting protests at the entrances of abortion providers, also “prohibits intentional property damage of a facility providing reproductive health services or a place of religious worship.”

Violent rhetoric against Catholics appears to be escalating in society. After the left-wing Atlantic magazine published an article likening the Catholic rosary to an “assault weapon,” they scrambled to alter the article (which they did multiple times) after substantial online outrage.

Subsequent to the initial pieces written, the Catholic League and its president, Bill Donohue, condemned “left-wing anti-Catholic bigotry,” both in the United States and abroad.

Only days before the rosary debacle, the Atlantic published a piece arguing that Jane’s Revenge was little more than a right-wing “bogeyman,” asserting that the string of violence “does not imply the existence of a complex, coordinated campaign of violence.”

CatholicVote has planned a million-dollar ad campaign designed to draw attention to Joe Biden’s failure to protect churches and other pro-life organizations during the Summer of Rage and beyond. CatholicVote President Brian Burch accused the Biden administration of a “shameful pattern of injustice and failure to protect those who advocate for mothers and innocent unborn children exposes the utter corruption at the highest levels of government.” This includes the Department of Justice, he said, “which was quick to investigate concerned parents at school boarding meetings but has not prosecuted a single person responsible for vandalizing or firebombing churches and health centers that serve women in need.”

The White House recently announced a “unity summit” to, as Susan Rice explained in a White House blog post,:

…counter the corrosive effects of hate-fueled violence on our democracy and public safety, highlight the response of the Biden-Harris Administration and communities nationwide to these dangers, and put forward a shared, bipartisan vision for a more united America.

Though the results of the FBI investigation are pending, there has been little (if any) additional public effort from the Biden administration or federal law enforcement to acknowledge the rash of bigoted attacks against America’s religious communities by pro-abortion radicals in the wake of the Dobbs decision. This alarming disparity is only punctuated by high-profile efforts to investigate political conservatives that dominate headlines nearly every day. Meanwhile, this pattern of left-wing violence has received scant coverage from the establishment media, with the exception of some local and faith-based outlets.