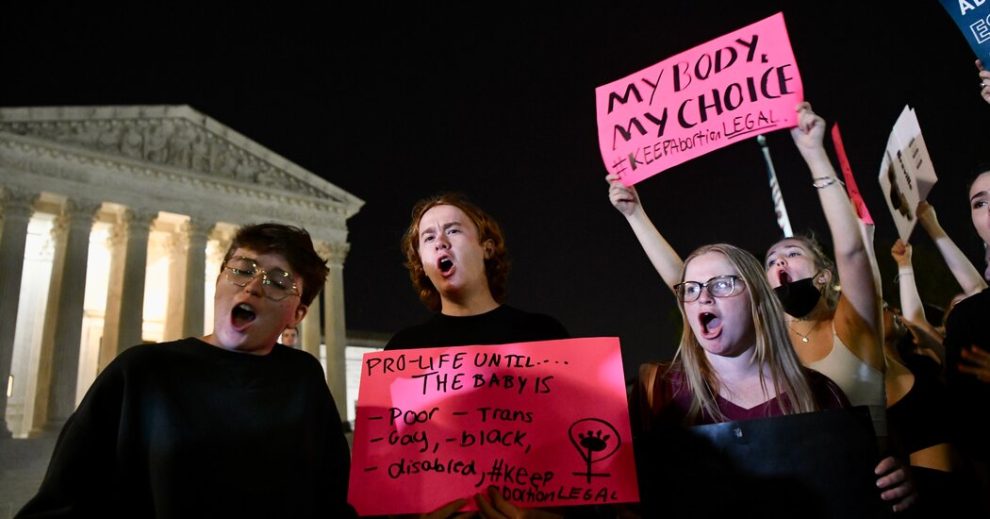 Amid threats to Catholic churches by pro-abortion forces that have been enraged that the Supreme Court could overturn the Roe v. Wade ruling legalizing abortion, Virginia Attorney General Jason Miyares has issued a warning.

The group Ruth Sent Us, as well as others, called for Catholic churches to be targeted on Mother’s Day. On Saturday, protests erupted outside of a New York City church as police braced for more protests.

Last week, a Catholic church in Boulder, Colorado, was defaced in response to the leaked draft ruling that showed five justices seeming to be on board with allowing states to craft their own abortion laws, according to KCNC-TV.

Miyares said that Americans have a right to worship, and he will come down hard on anyone who tries to take away that right.

“I deeply respect the First Amendment rights of speech and assembly. But no one has the right to interfere with the fundamental and natural right of all Virginians to practice their religion in peace,” he said in a statement.

“Virginia’s long tradition of protecting religious liberty dates back to the founding of our Commonwealth, when Thomas Jefferson penned the Virginia Statute for Religious Freedom that is now enshrined in our Commonwealth’s Constitution. As Attorney General, I am charged with protecting this sacred right for all Virginians,” he said.

I deeply respect the First Amendment rights of speech and assembly. But no one has the right to interfere with the fundamental and natural right of all Virginians to practice their religion in peace. pic.twitter.com/LgNrhpPhdD

Miyares said the law is on the side of those who worship.

“Federal law makes it a felony to intimidate, interfere with or obstruct any person who is seeking to exercise his or her First Amendment right of religious freedom at a place of religious worship. Similarly, Virginia criminal law prohibits obstructing the free movement of other persons, trespassing on church property or obstructing proper ingress to and egress from a church. My office will be monitoring protest activities directed at houses of worship and will refer alleged criminal violations to the United States Department of Justice or to the appropriate Commonwealth’s Attorney,” he said.

“Furthermore, federal law authorizes states to bring civil suits to protect their citizens’ free exercise of religion. If protest activities directed at houses of worship cross the line to illegal obstruction, intimidation or interference, I will not hesitate to bring suit to protect the religious freedom of the citizens of this Commonwealth.”

Justice Kavanaugh's neighbor is organizing the protest outside his home. Teacher Lacie Wooten-Holway declared "We’re about to get doomsday, so I’m not going to be civil to that man at all.” https://t.co/I9NrJizWQP It is the license of the age of rage. https://t.co/eP8YO7aX4M

“The time for civility is over, man,” protest organizer Lacie Wooten-Holway said, according to the New York Post. “Being polite doesn’t get you anywhere.”

In an Op-Ed for The Hill, legal scholar Jonathan Turley noted that after the leak took place “a virtual flash-mob formed around the court and its members demanding retributive justice.

“This included renewed calls for court ‘packing,’ as well as the potential targeting of individual justices at their homes. Like the leaking of the opinion itself, the doxing of justices and their families is being treated as fair game in our age of rage.”

Turley said the Biden White House has stoked the rage instead of calming it.

“When asked for a response to the leaking of a justice’s draft opinion, White House press secretary Jen Psaki declined to condemn the leaker and said the real issue was the opinion itself. Then she was asked about the potential targeting of justices and their families at their homes, and whether that might be considered extreme. It should have been another easy question; few Americans would approve of such doxing, particularly since some of the justices have young children at home. Yet Psaki declared that ‘I don’t have an official U.S. government position on where people protest,’ adding that ‘peaceful protest is not extreme,’” he wrote.

“In reality, not having an official position on doxing and harassing Supreme Court justices and their families is a policy,” he wrote.

“In this case, the Biden administration and the Justice Department have condemned the court’s leaked draft — but not the threatened protests at justices’ homes, even though those arguably could be treated as a crime.”