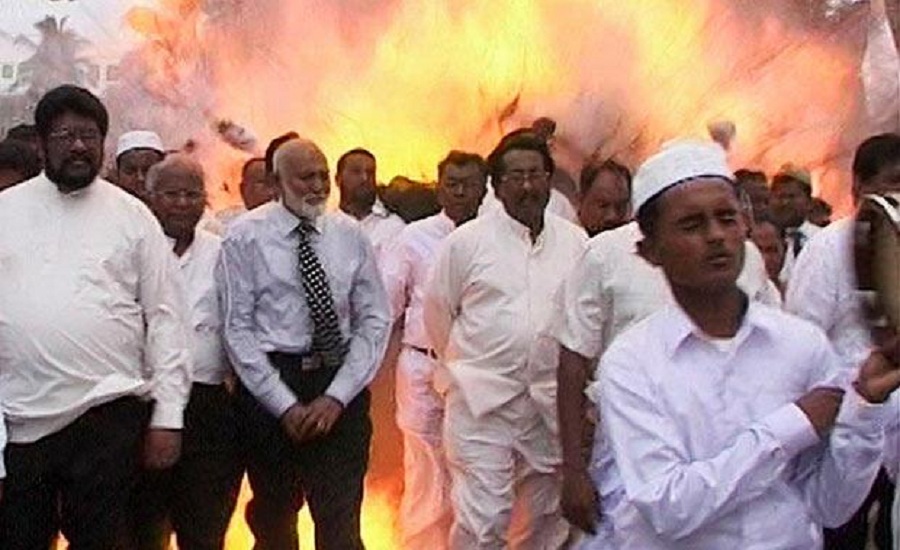 Sisters of two of the alleged Sri Lanka suicide bombers revealed Thursday that their siblings – who have been described by officials as “well-educated people” — became increasingly distant and “totally crazy” in the years leading up to the coordinated Easter Sunday massacre.

Their comments come as reports emerged that one of the bombers was let go by police after being arrested earlier at some point.

“He told male relatives off for trimming their beards and became angry and totally crazy,” Samsul Hidaya, who identified herself as the sister of suspected bomber Abdul Lathief Jameel Mohamed, told the Daily Mail. “So I just stopped speaking to him because it got to the point where it was getting out of hand.”

In an interview published Thursday, Hidaya confirmed reports that her brother – who was in his late 20s — studied abroad in the U.K. and Australia before returning to Sri Lanka. But she says after coming home from Down Under, he was “a different man”.

“I had many arguments with him,” she said. “At first he started quoting scripture and I would say ‘OK, you’re right.’”

“But then the conversation got deeper and deeper into religion and I couldn’t follow what he was saying any longer,” she added.

Mohammad Hashim Madaniya, who identified herself as the sister of radical Islamic cleric Zahran Hashim (alternately known as Mohammed Zahran) – told the BBC a similar story.

Her brother has been mentioned in media reports as being one of the suicide bombers and possibly the mastermind of the attacks. Hashim also purportedly has appeared in ISIS-affiliated propaganda claiming responsibility for the bombings, which have left 359 dead and hundreds more wounded.

“We had a very good relationship during our childhood. He was very friendly with everyone in the neighborhood,” Madaniya told the BBC. “But for the last two years, he has not been in contact with us.”

Madaniya says she learned about her brother’s alleged involvement in the bombings through the media.

“I never thought, even for a moment, that he would do such a thing,” she said. “I strongly deplore what he has done. Even if he is my brother, I cannot accept this. I don’t care about him anymore.”

Madaniya says Hashim went off the grid after Sri Lankan police tried to arrest him years ago for allegedly stoking violence between Muslim groups. She also claimed her elderly parents left their home in Sri Lanka days before the bombings and have not been heard from since.

“It makes me think that my brother could have kept in touch with them,” she said.

Police reportedly though have tracked down the father of two sons suspected of blowing themselves up in the attacks.

Mohamed Yusuf Ibrahim, a wealthy spice trader in Colombo – the city where many of the bombings happened – is in custody over suspicions that he helped his sons, according to CNN.

A government spokesperson also told the network that one of the sons, Ilham Ahmed Ibrahim, had been arrested before and then released. He is suspected of targeting a hotel.

“It was the suicide bomber of the Cinnamon Grand bomb attack who was released earlier,” Sudarshana Gunawardana said, without elaborating.

As of Thursday, 58 people have been arrested and police are still setting off controlled detonations of suspicious items as they continue to investigate the attacks.