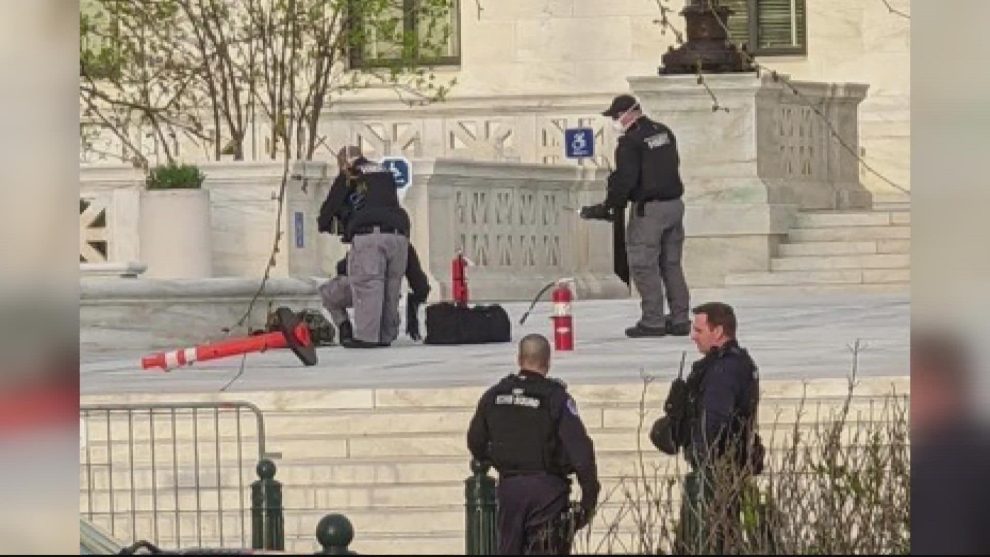 Climate activists have hailed Wynn Bruce as a martyr for burning himself alive before the U.S. Supreme Court steps in protest of climate change.

As Breitbart News previously reported, 50-year-old Wynn Bruce died from injuries he sustained after lighting himself on fire in front of the Supreme Court to raise awareness about climate change:

In an incident report, the Washington, DC, Metropolitan Police Department (MPD) stated that 50-year-old Wynn Bruce of Boulder, Colorado, carried out the act at about 6:05 p.m. Friday, the Hill noted. The MPD, Supreme Court Police, and Capitol Police responded to the scene. After being conveyed to a local hospital via helicopter, Bruce died of his injuries.

According to Bruce’s Facebook page, he was a practicing Buddhist performing an act of self-immolation. In the hours following his untimely death, climate activists have taken to social media to hail him as a hero who performed a compassionate act of self-sacrifice.

“This guy was my friend. He meditated with our sangha. This act is not suicide. This is a deeply fearless act of compassion to bring attention to climate crisis. We are piecing together info but he had been planning it for at least one year. #wynnbruce I am so moved,” tweeted Dr. Kritee K, a Zen Buddhist priest and senior scientist at the Environmental Defense Fund (EDF).

This guy was my friend. He meditated with our sangha. This act is not suicide. This is a deeply fearless act of compassion to bring attention to climate crisis. We are piecing together info but he had been planning it for atleast one year. #wynnbruce I am so moved. https://t.co/bHoRaLK6Fr

I invite you to pre-pitch the headline you want NYT to use when the human race collectively commits climate suicide.

We're all committing suicide. Wynn Bruce just did it after great reflection. https://t.co/oIs9QoUu5u

some thoughts on Wynn Alan Bruce's self-immolation on the steps of the Supreme Court this Earth Day. written while crying, mourning his passing, and acknowledging his sacrifice. may he rest in peace. pic.twitter.com/mCeLef0lSy

How many people know that a dude lit himself on fire and died at the Capitol yesterday??????

He was a 50yo Buddhist man, and just yesterday he died after setting himself on fire in front of the U.S. Supreme Court to protest government inaction on climate change. On Earth Day.

And the media has been all but completely silent.

His name was Wynn Bruce and he self-immolated on Earth Day as an act of protest against government inaction on climate change which has been the greatest willful act of violence against all life on this planet. https://t.co/FqgPFG08VQ

On Earth Day, Wynn Bruce, a Buddhist, perished outside the Supreme Court in a self-immolation protest against climate crisis inaction.

The media needs to report this story better, and politicians need to address it. https://t.co/ujgMzIugQv pic.twitter.com/KIrnlp2G7X

Wynn Alan Bruce died yesterday so everyone could knock off the “happy” Earth Day crap.

His death was an act of generosity, self-sacrifice, giving his life so others might pay more attention to the degree of the threat to our climate, and what needs to be done. He’s a hero. https://t.co/ZPwi5Rv65w

A man self-immolates to protest climate change inaction and of course the media frames it as "weird man sets himself on fire for totally inscrutable reasons." If this isn't an indictment of the society we're living in, I don't know what is. Remember Wynn Alan Bruce. https://t.co/4G4UNcOWRs

Can’t stop thinking about Wynn Bruce lighting himself on fire at the Supreme Court to call for climate action. It’s really on us. Capitalists will let us die as long as they profit, and the government will police us instead of taking action. We’re all we got.

It's really insane to me that Wynn Alan Bruce self-immolated (lit himself on fire, killing him) in front of the US Supreme Court today to protest climate change inaction but we've collectively decided we care more about the NBA playoffs and UFC more.

May the self immolation of Wynn Bruce on April 22, 2022, Earth Day , at the steps of the Supreme Court be an awakening to the American people. He was pleading with the world in a final act of activism to stop our very own annihilation . May we listen. #ClimateActionNow https://t.co/J3qzha5Str

See also  Tara Reade Is Ready to Testify Before Congress Against Joe Biden
Share this article: