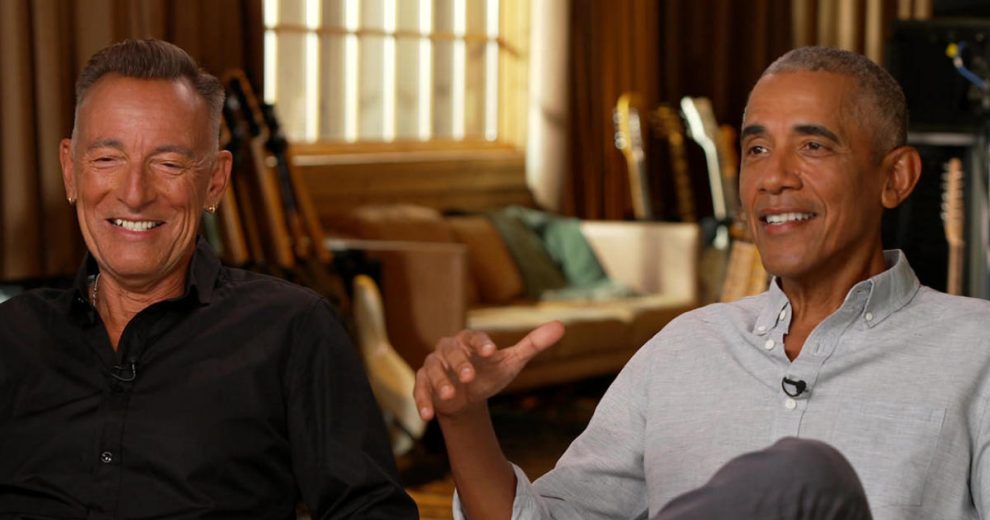 The two race-obsessed mega-lefties met to push their new podcast “Renegades: Born In The USA.” At one point, the Bamster mentions Springsteen’s long-time sax player, Clarence “Big Man” Clemons, who was black. Clemons died in 2011 after performing with Springsteen for 39 years.

“What Bruce and Clarence portrayed on stage was essentially a reconciliation,” Obama claims.

“But most of your audiences were primarily white,” Obama says to Springsteen. “And they can love Clarence when he’s on stage but if they ran into him in a bar…”

WOW. Barack Obama can't Help Himself. He says BRUCE SPRINGSTEEN FANS loved Clarence Clemmons but only "on-stage"–if the "primarily white audience" ran into Clarence at a bar, they'd call him THE N-WORD. Barack–you don't have a damn CLUE about this country. pic.twitter.com/X4xwQU5ld8

Ouch. I can’t imagine how Springsteen fans feel about their icon agreeing that they’re a bunch of bigoted hobgoblins, so let’s read some of the Twitter responses.

WOW. Barack Obama can't Help Himself. He says BRUCE SPRINGSTEEN FANS loved Clarence Clemmons but only "on-stage"–if the "primarily white audience" ran into Clarence at a bar, they'd call him THE N-WORD. Barack–you don't have a damn CLUE about this country. pic.twitter.com/X4xwQU5ld8

Hey @BarackObama As an NJ local who saw Clarence in bars I can assure you he was a larger than life much beloved local. This comment makes me sick . @springsteen this is false and you know it . SHAME ON YOU!

Here is the punchline: Both of these jackpuddings have relied on white people for their respective successes.

Yes, it’s safe to assume most of Springsteen’s fans are white, but they revered Clemons as a sax god. Clemons sold out venues performing solo to fans he acquired from playing for years with Springsteen.

Not to be Mr. Obviouspants here, but Obama is an idiot. As the first black elected leader of a western nation — twice — Obama is walking, breathing proof that the U.S. isn’t nearly as racist as he needs to believe. If America’s white people are torch-wielding Klans-folk, how did Obama win twice? The black vote alone would not have carried him over the victory line.

One can argue Obama’s resume didn’t merit a presidential run but that people voted for him solely based on his race.

Rolling Stone called Clemons the “backbone” of Springsteen’s E Street Band. Springsteen mentions him in his live rendition of “Santa Claus Is Coming to Town.” The beloved Clemons had a prominent place in Springsteen’s videos in the ’80s. He was adored, even by those drooling, racist hillbillies who have been buying Springsteen’s records, CDs, downloads, and concert tickets for 50 years. I’m not even a fan of Springsteen but I was bummed to hear Clemons had died.

Let’s not forget Bruce Wokensteen canceled a concert in North Carolina over a law stating that people need to use the restroom of their real gender. Bruce lost his marbles over where the state’s transgender crowd, which is at best .42% of the state’s population, can make pee-pee.

“Some things are more important than a rock show and this fight against prejudice and bigotry — which is happening as I write — is one of them,” Springsteen wrote on his website.

Women have the right to use a restroom without a man next to them. It’s not bigotry; it’s decency, but remember: Leftists need to find hate in others, real or imagined, to feel better about themselves.

If Springsteen believes his fans are hate-mongers, why continue performing for legions of white, rage-filled goobers? Teach your fan base a lesson and retire.