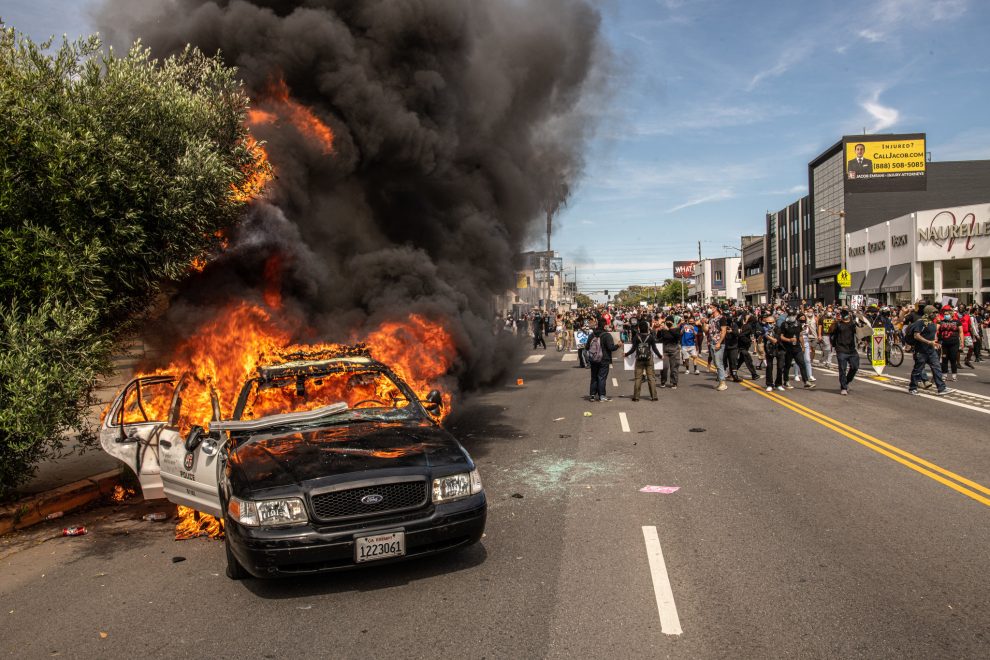 Violent demonstrators attacked police, vandalized a sidewalk, and smashed a local business on Tuesday evening during a protest against the Supreme Court’s impending decision to overturn Roe v. Wade, the landmark 1973 abortion decision.

The gathering was initially peaceful, as several hundred people gathered in front of the federal courthouse in downtown Los Angeles to share their outrage at a leaked majority decision in the Dobbs v. Jackson Women’s Health Organization case.

The decision, written by Justice Samuel Alito and joined by four other conservative justices, restricted the holding in the case to abortion, though Democrats tried to inflame outrage by claiming all other privacy rights and social issues were affected.

Later, however, the event turned violent, as demonstrators tried to take over an intersection, and some threw rocks and bottles at police.

Receiving update on protest @ Pershing Square. A segment of the group began to take the intersection. We attempted to communicate, clear and provide dispersal order to the group. Crowd began to throw rocks and bottles at ofcrs . We have one ofcr injured( Unk extent). https://t.co/nYMbwTUsxj

As the Los Angeles Times reported, some also sprayed graffiti in front of City Hall, and attacked police vehicles:

Around 7:30 p.m., officers escorted a group of about 250 demonstrators marching from the courthouse at Broadway and 1st Street to Pershing Square, said Los Angeles Police Chief Michel Moore. At some point, a group started to take over an intersection.

Police slowly drove a pair of vehicles into the intersection, moving about 40 protesters out of the way. Some were seen pounding on the hoods of the vehicles; most left the intersection.

One person smashed the window of a law enforcement vehicle near Grand Park, and others tagged a bus stop with the words “Google LASD gangs.”

[“LASD gangs” is a reference to reports of gangs within the Los Angeles Sheriff’s Department, an ongoing local scandal.]

The Times also noted that a glass door of a local Planet Fitness location was smashed during the clashes with police.

Video of the confrontations circulated online:

NOW: LAPD attempt to arrest pro-choice protesters but fail as they get mobbed by rioters. pic.twitter.com/XWn9xC23Hk

Some law enforcement officials were from the Department of Homeland Security, who arrived to assist local police forces.

The pro-choice march has arrived at Pershing Square in Downtown Los Angeles, speeches and chants for abortion rights continue. pic.twitter.com/aYWBwSQqTg

This was the same law enforcement agency that then-Sen. Kamala Harris (D-CA) referred to as a “paramilitary” force when officers tried to protect a federal courthouse from Black Lives Matter rioters in Portland in 2020.

On Tuesday, Harris issued a statement declaring it was “time to fight for women and our country with everything we have.”

This is the time to fight for women and our country with everything we have. My statement on the Supreme Court decision draft on Roe v. Wade. pic.twitter.com/5tvjOUTmZ2

There were other demonstrations across California, with several hundred protesters gathering in front of federal buildings in San Francisco and Oakland, as well as outside a federal courthouse in Sacramento, the state capital.