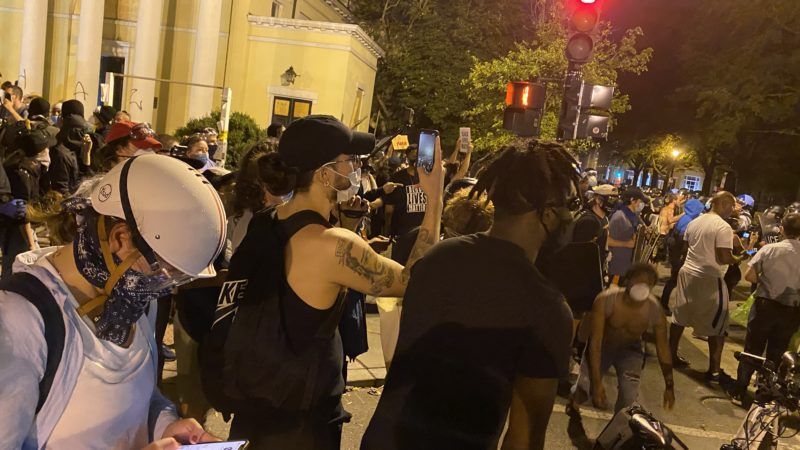 A group of protesters assaulted a reporter as he filmed the widespread looting taking place in Philadelphia. The looting took place during the second night of Black Lives Matters protests over the shooting death of a knife-wielding assailant by police.

On Tuesday night, Elijah Schaffer, a journalist with The Blaze recorded some of the widespread lootings taking place in Philadelphia. As he entered a discount store, dozens of masked rioters were in the process of looting. He became the target of a violent assault as looters demand he stop recording their criminal activity.

This standoff remains tense but not violent in this area — both sides holding. I’ve seen police take away one individual, but didn’t see what prompted the arrest.

After the attack, a bloodied Schaffer posted a video on Twitter telling his side of the story. Schaffer claimed he had been recording the looting in multiple stores when the looters turned on him. The journalist claimed that he would likely need stitches as he sowed some of his injuries.

BREAKING: I was jumped by BLM rioters while they were looting more than a dozen stores,

Though in pain, I didn’t stop reporting because

Americans need to see what the corporate media refuses to show
pic.twitter.com/VI5hl8uV3C

The widespread rioting and looting in Philadelphia is tied to the recent shooting of Walter Wallace, Jr. who chased police officers with a knife forcing two police officers to fire at him. Despite efforts by police to save him, Wallace died shortly after at a local hospital. As Breitbart News reported, on Monday, protesters turned violent in a series of riots that sent more than 30 police officers to the hospital, including one female sergeant who was struck by a truck driven into a line of police.