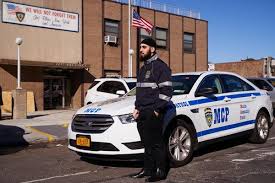 What is the Muslim Community Patrol?

“It’s like a neighbourhood watch but on steroids,” said Noor Rabah, the group’s 31-year-old vice president who lives in Sunset Park.

As word of the new patrol has begun to spread, the backlash has been swift, even among some members of the Muslim community who have criticised the lack of information, and questioned the need for the patrol.

Like the Shomrim that patrols largely Hasidic neighbourhoods in Brooklyn and the Brooklyn Asian Safety Patrol that operates mainly in Sunset Park, the new group – believed to be the first of its kind in the country – hopes to function as extra sets of eyes and ears for the police.

The unarmed civilian patrol will offer translation services – its members are fluent in any of seven languages – explain cultural nuances, report suspicious activity, respond to traffic accidents and even help in searches for the missing. The patrol has the support of Brooklyn’s borough president, Eric L Adams, and assistant chief Brian J Conroy, the commanding officer of patrol borough Brooklyn South.