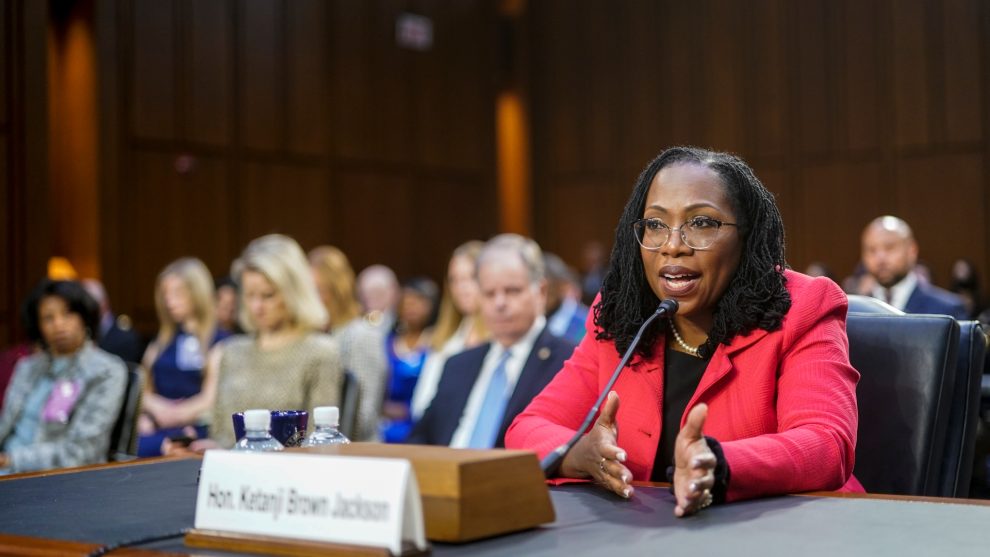 Sen. Mitt Romney (R-UT) reportedly believes it is “off course” for Republicans to attack Biden Supreme Court nominee Ketanji Brown Jackson for giving out lenient sentences to those in possession of child pornography.

According to Washington Post congressional correspondent Paul Kane, Mitt Romney told him that claims about Ketanji Brown Jackson’s record on child pornography sentencing will not affect his vote.

“Romney tells me that child-porn angle via Hawley/Cruz is wrong, won’t impact how he votes,” said Kane. “‘It struck me that it was off course, meaning the attacks were off course that came from some. And there is no there, there.’”

Romney tells me that child-porn angle via Hawley/Cruz is wrong, won't impact how he votes.

“It struck me that it was off course, meaning the attacks were off course that came from some. And there is no there, there.”

News of Romney’s position did not go over well with conservatives.

If @MittRomney truly believes it’s “off course” for senators to scrutinize a Supreme Court nominee’s judicial record, including her ordering lenient sentences in 7 of 7 cases for predators who possess and distribute child pornography, he must resign.

I once again say that an actual conservative desperately needs to primary Mitt Romney next time around. https://t.co/9ZUDbvpcbU

“As far back as her time in law school, Judge Jackson has questioned making convicts register as sex offenders – saying it leads to ‘stigmatization and ostracism,’” he added. “She’s suggested public policy is driven by a ‘climate of fear, hatred & revenge’ against sex offenders.”

When questioning Ketanji Jackson during the confirmation hearings, Hawley centered on one particular case in which she gave a person in possession of child pornography only three months in prison while refusing to label them a pedophile.

“You said to him, ‘This is a truly difficult situation. I appreciate that your family is in the audience. I feel so sorry for them and for you, and for the anguish this has caused all of you. I feel terrible about the collateral consequences of this conviction,’” Hawley charged.

“Then. you said, ‘Pedophiles are truly shunned in this society,’” he added. “I’m just trying to figure out, Judge, is he the victim here? Or are the victims?”

Senator Hawley questions Judge Jackson on her lenient sentencing and apology to a sex offender. pic.twitter.com/eL66oCIRXs

Ketanji called the case “unusual,” arguing that the defense wanted probation for the offender, who had just graduated high school, and that she wanted to avoid “unwarranted sentencing disparities.”

When questioned by Sen. Dick Durbin (D-IL), Ketanji said that she was following statutes set by congress.

“The statute [set by Congress] doesn’t say ‘impose the highest possible penalty for this sickening and egregious crime.’ The statute says ‘calculate the guidelines, but also look at various aspects of this offense and impose a sentence that is sufficient but not greater than necessary to promote the purposes of punishment,’” Ketanju explained.

Ketanji further noted that those statutes were created at a time when “more serious child pornography offenders” were judged based on the “number of photographs that they received in the mail,” adding that they “made total sense before when we didn’t have internet.”

“But the way that the guideline is now structured based on that set of circumstances is leading to extreme disparities in the system because it’s so easy for people to get volumes of this kind of material now by computers,” she said. “It’s not doing the work of differentiating who is a more serious offender in the way that it used to. So, the commission has taken that into account, and perhaps more importantly, courts are adjusting their sentences in order to account for the changed circumstances — but it says nothing about the court’s view of the seriousness of this offense.”