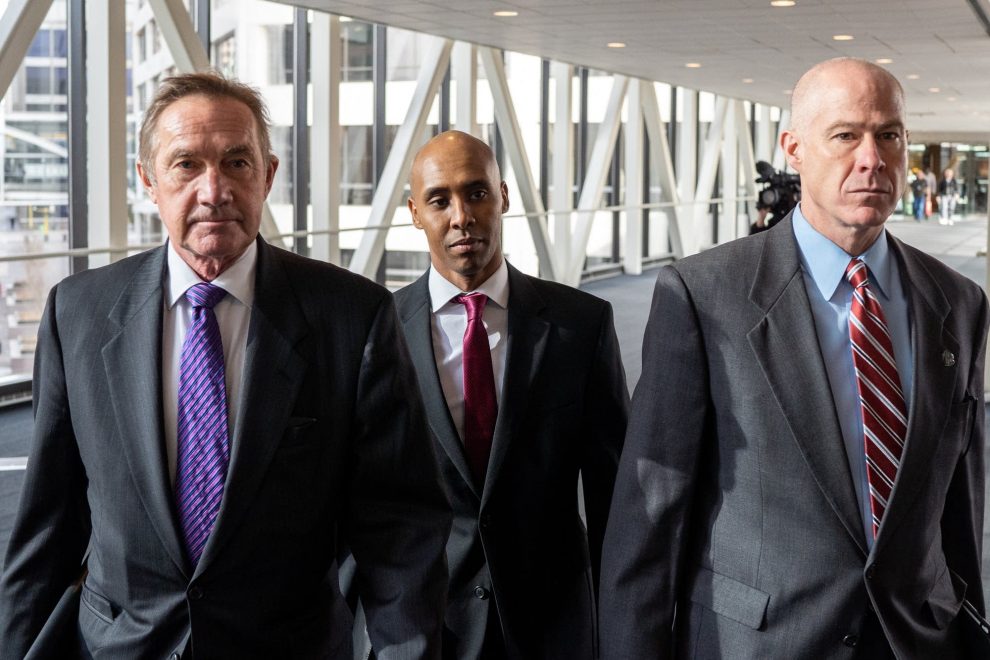 An attorney for a former Minneapolis police officer who fatally shot an unarmed Australian woman in July 2017 said on Tuesday his client had followed his training and had reason to believe he was being ambushed.

Mohamed Noor, 33, is charged with murdering 40-year-old Justine Ruszczyk Damond when he shot her through his patrol car window while responding to her 911 call to report a possible sexual assault near her Minneapolis home.

‘It was a tragedy, but in no way was it a crime,’ defense attorney Peter Wold said in his opening statement in Hennepin County District Court in Minneapolis.

Wold said Noor followed his training and had good reason to be on guard when he responded to Damond’s call. The call reported a vague threat in an alley at night, and could have been, Wold said, ‘a classic ambush scenario’ and ‘a set-up.’

The alley was silent when Noor and his partner, Matthew Harrity drove up, Wold told a jury. Wold thumped his hand on the table in the courtroom dramatically to demonstrate the sound that Noor and his partner Harrity claim surprised them and prompted Noor to fire his gun.

Earlier on Tuesday, prosecutors disputed the defense’s claim that Damond thumped the patrol car and scared the officers.

U.S. attorney Patrick Lofton said neither Noor nor Harrity mentioned a loud noise on the night of the crime, raising the question of whether they had later fabricated that version of events.

‘None of them heard anyone say anything about a bump or slap on that squad,’ Lofton said.

The shooting, which Australia’s then-Prime Minister Malcolm Turnbull called ‘shocking’ and ‘inexplicable,’ added to a wave of controversial U.S. police killings of unarmed civilians, and led to the resignation of Minneapolis police chief Janee Harteau.

Noor has pleaded not guilty to charges of third-degree murder and second-degree manslaughter, which carry respective penalties of up to 25 and 10 years in prison.

Damond had taken the name of her fiance, Don Damond, ahead of their wedding planned for August 2017. She owned a meditation and life-coaching company, according to her personal website.

Her family filed a civil lawsuit against the city and several police officers last month seeking $50 million in damages.

It accuses Noor and Harrity of conspiring to conceal the facts around the shooting and failing to record the incident on their body cameras.