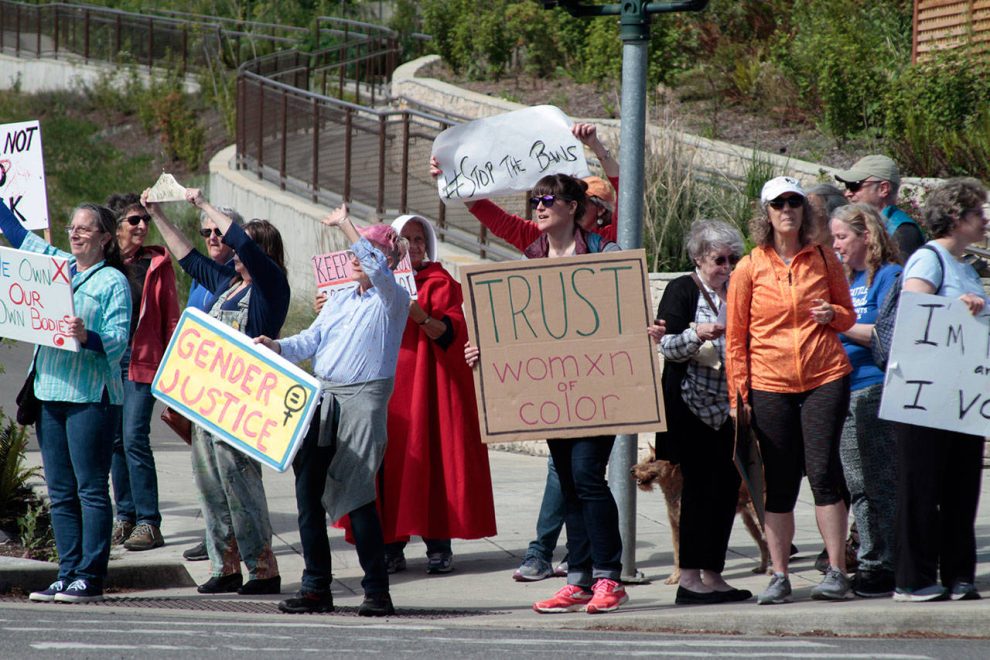 Since the leak of Justice Samuel Alito’s draft majority opinion in the Dobbs v. Jackson Women’s Health Organization case that eventually led to the overturning of Roe v. Wade, America has endured a “Summer of Rage.” The wave demonstrations saw protesters going far beyond simply donning “Handmaid’s Tale” bonnets and gathering around the Supreme Court. There have been dozens of acts of violence, destruction, and harassment aimed at intimidating anti-abortion Christians and conservatives. In this series of articles, we will identify key players, organizations, and locations in this radical movement. We will also explain elements of the interconnected system that provides organizational and/or financial support for this radical agenda.

According to data compiled by the Family Research Council, there have been more than 100 attacks against pro-life groups nationwide since the beginning of May, many of which have been attributed to Jane’s Revenge, a far-left militant group that has taken credit for much of the violence.

Jane’s Revenge has garnered support from networks of leftwing activists, particularly those tied to the Madison, Wisconsin area. Just two days before the first Molotov cocktail attack on Wisconsin Family Action on May 8, 2022, the Facebook page of a group called International Workers of the World (IWW) of Madison Wisconsin posted a history of the Jane Collective, the 1960s pro-abortion group from which Jane’s Revenge takes its name.

A primer on how to fight “state oppression” by protesting and evading law enforcement.
A reminder to “always assume that law enforcement or other fascists and hostile actors could be within earshot. Avoid gossip, speculation, and joking about anyone’s alleged participation in any criminalized activity.”
An ominous photo warning that “Snitches Get Stitches.”
The attack on Wisconsin Family Action drew statements of support from other radical groups in Madison. A group calling themselves Unnamed Autonomous Collective published a statement lauding the attack and calling for more:

We joyously support militant action that destroys the records, servers, clipboards, and desks used to organize the vile workings of Wisconsin Family Action. This action, and others like it, bring the consequences of the fascists’ actions back to their doorstep. It assesses a monetary and psychological cost for their ongoing campaign of violence, and serves to inspire others to act.

The group doubled-down several weeks later in a post stating, “We, a group of Madison anarchists, joyously support militant Action that targets the ability of fascists to organize, lobby or enact their violence.”

One counterterrorism analyst theorized that Jane’s Revenge was more a “loose-knit” collection of activists than a formal organization. Writer Robert Evans, who first obtained the initial statement provided by Jane’s Revenge and has elevated them online, speculated that their claim to be nationwide was likely “aspirational,” and that the group was angling to inspire copycats through their dramatic tactics and messaging.

Another Jane's Revenge tag, this one unconnected with any sort of attack.

For the record I suspect the communique's initial claims of multi state membership were aspirational. But it seems like people have latched onto the idea. https://t.co/CAoBImyhKY

This radical movement has thrived online, especially on Twitter.

A radical left-wing blog called Abolition Media has emerged as a clearing house for left-wing threats of violence, has become the go-to for activists associating themselves with Jane’s Revenge. The group has posted dozens of “communiques” since the leak of Justice Samuel Alito’s draft Dobbs opinion. At least nine of those “communiques” either mention or are attributed to Jane’s Revenge.

Posts on the website also include violent incidents not related to abortion protests. After an anarchist was killed by police after throwing Molotov cocktails at patrol cars, Abolition Media wrote that such attacks were “a legitimate and necessary response.” In May, the group also posted an 11,000-word statement from a jailed Greek anarchist calling for “revenge” against law enforcement for the death of Portland ANTIFA rioter Michael Reinoehl.

Abolition Media deftly uses Twitter to promote violence. The pattern of their social media posts is simple: they post images of violence and destruction without openly endorsing them, then include links to articles with the same images that openly support the militancy and/or call for more. Thus far, this strategy has circumvented Twitter rules against posting calls to violence.

We reached out to Twitter about Abolition Media’s use of their platform to promote violence, but Twitter has not replied as of press time.

For example, Abolition Media tweeted the following blog post link and photo from an attack on a pregnancy center in Lynchburg, Virginia:

The link in the above tweet goes to a blog post that states, “We encourage anyone to gather their friends, pick up a crowbar or a bottle of spray paint, find your nearest misogyny shop, courthouse, or pig pen and go fucking ape shit.”

Another example of their violent actions and online rhetoric can be seen in this tweet regarding a pregnancy center in Burlington, Vermont:

The Burlington tweet was accompanied by a link to a blog post stating: “It’s time to put up a real fight. Gather your friends and collect heavy rocks. Learn the skill of accelerant bartending. Decentralize your actions– go into the night and be feral with joy! This is the fight of our lives and it’s just getting started. This time it was concrete slabs. Next time we’ll bring it Wisconsin-style.”

The Colorado image contains the phrase “if abortions aren’t safe neither are you” and an anarchist symbol graffitied on the wall of facility. They also put the words “crisis pregnancy center” in quotation marks in the corresponding blog post about the attack.

Abolition Media’s tweet about the attack on a crisis pregnancy center in Glendale, California, included a “Night of Rage Communique” that was particularly graphic:

The night of June 24 was the Night of Rage. We decided to attack a crisis pregnancy center in Glendale, California with spray paint. The phrases written were “Jane was here”, “abort the court” , and “If abortions aren’t safe neither are you”. All across the country people protested and revolted against this attack on bodily autonomy.

To all the conservatives, Fox News anchors, judges, cops, Christian extremists, or federal agents reading this:

This attack is nothing in comparison to what is in store for you. Some spray paint will be the least of your worries….

We will hunt you down and make your lives a living hell. You started this war but we will win it. So far its just been pregnancy crisis centers, but tomorrow it might be your cars, your homes, or even your lives. We support a diversity of tactics and we will not step down in this fight.

The blog post linked in a tweet following an attack on a Detroit pregnancy center included an ominous note: “Jane will have her revenge.”

It is through this method that violent left-wing radicals are able to essentially “meme” violence on social media.

Aside from the Industrial Workers of the World of Madison, other far-left organizers that have been especially active in recent months are also Madison-based. Some of these groups have no apparent direct ties to violence in the area but they reveal that the Wisconsin capital is a thriving hub of leftwing activism.

One such group is Freedom Inc. They organized abortion protests in Madison after the Dobbs v. Jackson Women’s Health Organization ruling came down. The group has been prominent at social justice protests in the area. In 2020, the Dane County Sheriff called on Freedom Inc. to denounce the firebombing of a municipal building after they were instrumental in organizing demonstrations after the Death of George Floyd. One of Freedom Inc.’s activists was arrested for threatening the District Attorney during a sentencing hearing.

Despite their connections to violent protest movements, Freedom Inc. receives federal and state funding, despite themselves calling to defund the police.

Three Freedom, Inc. board members — Chong Moua, Lori Lopez, and Sami Schalk — have teaching positions at the University of Wisconsin-Madison.

Another such group is OutReach LGBTQ+ Community Center, which (perhaps coincidentally) is located adjacent to Wisconsin Family Action, the site of the first Jane’s Revenge Attack. OutReach receives funding from local businesses and city, county, and state governments.

The center, Outreach LGBTQ+ Community Center, has been active in left-wing organizing in Madison. OutReach co-sponsored a 2019 counter-protest against “far-right” groups in the state capital. Other groups involved would go on to express support for Jane’s Revenge.

WFA and OutReach are regularly quoted together in press coverage of legislation.

OutReach has ties to Freedom Inc., which has been involved in organizing protests against the Dobbs decision in the Madison area. In 2016, OutReach gave Freedom Inc. their “Courage” award.

The non-violent left-wing activist community in Madison appears to be broad and well-funded; it also receives a considerable amount of mainstream support.