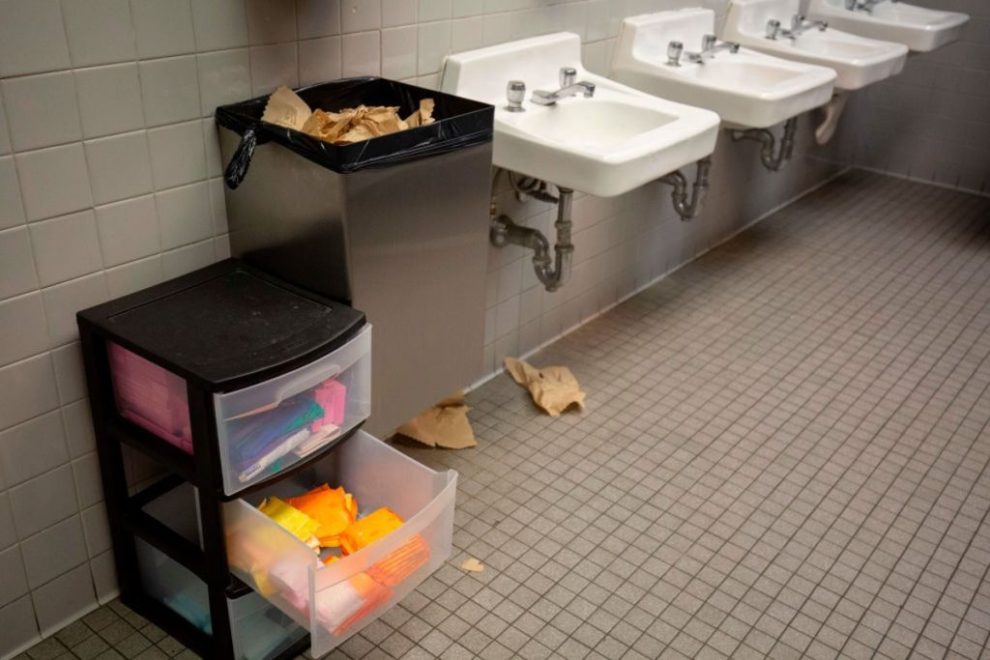 Feminine products, including tampons and pads, will be placed in all boy’s restrooms at Oregon Public Schools starting in the 2022-2023 school year to comply with the state’s 2021 “Menstrual Dignity Act” law.

The law requires “that both tampons and sanitary pads are available at no cost to students through dispensers located” in all student bathrooms, including boys’ rooms at elementary, middle, and high schools and every other public school building in the state.

Currently, the law requires that tampon and pad dispensers are placed “in at least two student bathrooms of every public school building.” “Student bathrooms” in the legislation refers to girls’ rooms, boys’ rooms, and unisex bathrooms. The change goes into effect on July 1, 2022.

Portland Public School (PPS) announced in an April 17 release that it had begun preparing for the upcoming requirements:

Starting next year (2022-23), products will be available in all restrooms (male, female, and all-gender) in every PPS building where education occurs. To ensure timely compliance, PPS ordered 500 dispensers. Dispensers have been installed in all elementary and middle school girls’ restrooms, and more will be installed in all remaining bathrooms, including boys’ restrooms, next year. Instructions for how to use tampons and pads will be posted in all bathrooms.

The release later added that all K-12 schools are receiving “basic lessons around the four pillars of Menstrual Dignity including Privacy, Inclusivity, Access, and Education” from the “Health and Adapted/Physical Education team.”

Oregon has also published a 26-page Menstrual Dignity for Students Tool Kit, the introduction of which reads in part:

Importantly, this law affirms the right to menstrual dignity for transgender, intersex, nonbinary, and two spirit students by addressing the challenges that some students have managing menstruation while minimizing negative attention that could put them at risk of harm and navigating experiences of gender dysphoria during menstruation. Research also connects gender-affirming bathroom access to supporting student safety at school.

Bridget Barton, who is running as a candidate in the state’s Republican Gubernatorial primary, ripped the law while speaking with Fox News Digital:

Radical leftist woke policies are destroying Oregon from our streets to our businesses to our schools. But as a mom, a new grandmother, and a Republican candidate for Oregon governor, I can’t believe we’re even discussing this — America’s most unpopular governor, Kate Brown, is putting free tampons in the boys bathrooms of Oregon’s elementary schools.

“When you give a grade school boy something that’s adhesive, they’re going to put it in places,” Bourne said. “These products are not inexpensive and they are going to be misused if they are placed in elementary school boys’ bathrooms.”