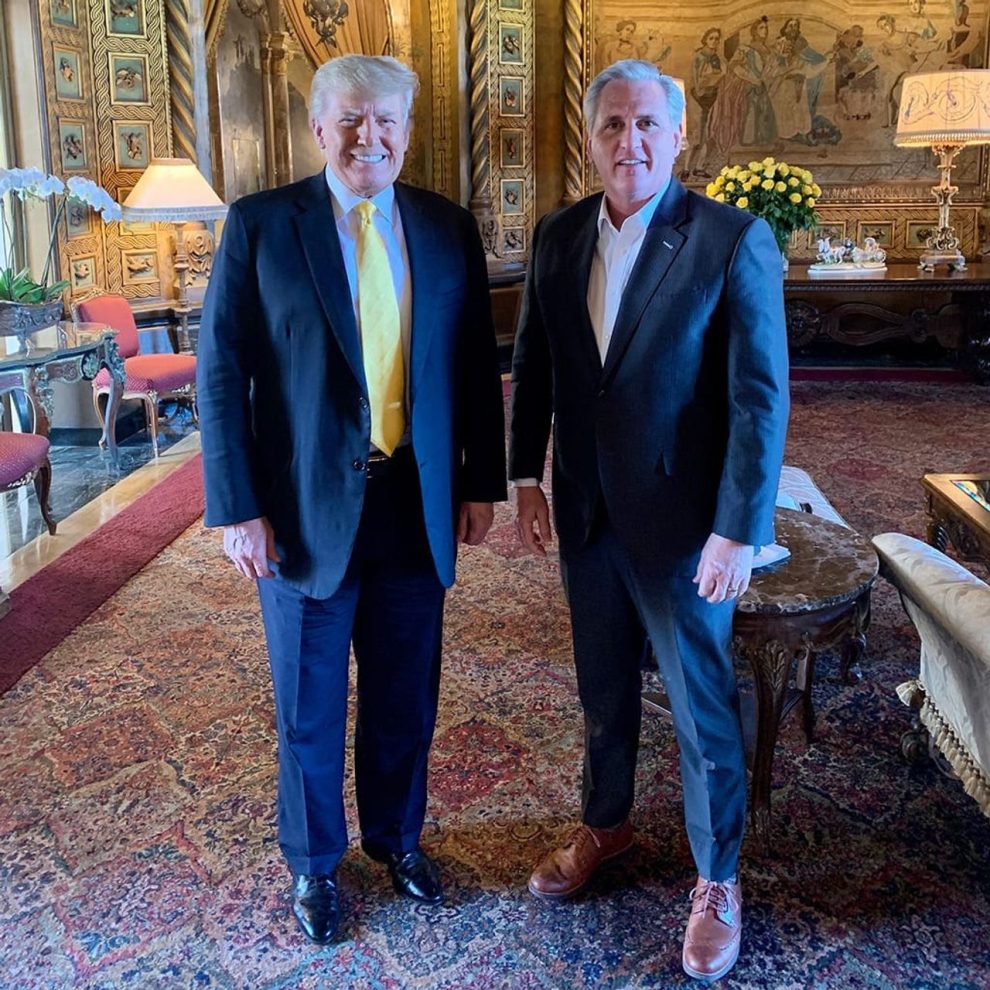 After now-House Speaker Kevin McCarthy finally secured the votes early Saturday to hold the gavel in the lower body of Congress, one of the first items on his agenda was to express gratitude to one of the men who made it possible.

They were exactly the kind of words that Democrats, their mainstream media propagandists and too many Republican opponents of former President Donald Trump didn’t want to hear.

But they’re going to echo throughout the next year heading into the presidential race of 2024.

“A lot of people worked really hard to put this together,” McCarthy said at a Capitol news conference early Saturday. “All the different members, hanging with me through all those different votes.

“But I do want to especially thank President Trump,” McCarthy said. “I don’t think anybody should doubt his influence. He was with me from the beginning …”

“What he’s really saying, really, for the party and the country … We have to come together. We have to focus on the economy. We got to focus to make our border secure.

“We’ve got to do so much work to do. And he was a great influence to make that all happen, so, thank you, President Trump.”

On his account on the social media platform Truth Social, Trump posted a video of McCarthy speaking with the words, “Thank you Kevin. It was my great honor!”

Rep. Jim Jordan of Ohio, a key supporter of McCarthy who is widely popular among the kind of conservatives and Republicans who weren’t backing McCarthy’s bid for speaker, also credited Trump for his role in getting McCarthy to the top.

“This doesn’t get done without the support and leadership of President Trump,” he told Breitbart News.

Trump’s most public contribution to McCarthy’s campaign was a statement posted to Truth Social on Wednesday demanding that Republicans “close the deal” and put McCarthy in the post being vacated by former House Speaker Nancy Pelosi.

“Some really good conversations took place last night, and it’s now time for all of our GREAT Republican House Members to VOTE FOR KEVIN, CLOSE THE DEAL, TAKE THE VICTORY, & WATCH CRAZY NANCY PELOSI FLY BACK HOME TO A VERY BROKEN CALIFORNIA,THE ONLY SPEAKER IN U.S. HISTORY TO HAVE LOST THE ‘HOUSE’ TWICE!” Trump wrote, with typical upper-case insistence.

“REPUBLICANS, DO NOT TURN A GREAT TRIUMPH INTO A GIANT & EMBARRASSING DEFEAT. IT’S TIME TO CELEBRATE, YOU DESERVE IT. Kevin McCarthy will do a good job, and maybe even a GREAT JOB — JUST WATCH!”

That didn’t do the trick immediately, of course, as round after round of balloting followed.

But there was Trump work going on behind the scenes that proved crucial, too.

The former president sealed the support of the bloc of House Republicans who’d supported McCarthy from the beginning, Rep. Marjorie Taylor Greene told Breitbart. And he continued to work the phones, eventually helping convince enough GOP representatives opposed to McCarthy to vote “present,” instead of nominating an individual by name. That reduced the number of votes McCarthy would need for a majority of members voting.

He defeated Democrat Hakeem Jefferies of New York — 216 votes to 212. (Naturally, the “diversity” loving Democrats voted in lockstep for one person.)

The story of Trump’s role in the speaker race goes well beyond a single day or group of days in January 2023. Since the time Trump left office, leftists and some commentators on the right have tried to pretend his influence over the GOP is waning.

Since Trump announced a new bid for the presidency, critics on the right have questioned his impact on the midterm elections and the Republicans’ failure to produce the kind of “red wave” that was expected by politicians of all stripes.

Some have also questioned whether he’s too tarnished by years of relentlessly negative media coverage (complete with endless, adulatory coverage of the committee investigating the Jan. 6, 2021 Capitol incursion), to serve as the party’s standard-bearer in 2024.

“Donald Trump’s iron grip on the GOP is beginning to crack. And some Republicans aren’t even sure he’s in command at all anymore,” Politico reported with obvious approval back in November, before Trump announced his third bid for the presidency.

The answer came when McCarthy was elected House speaker.

At the moment, Trump is the only serious candidate for the GOP nomination. (A statement by his former national security advisor, John Bolton, that Bolton is entering the race has been greeted by a well-deserved shrug. Most of Bolton’s fans would have probably recoiled at the idea of him being president even when he was at the height of his popularity. Given his back-stabbing treatment of Trump since he left the Trump White House he’s probably more popular with progressives than anyone on the right.

In a Republican primary at this point, it would be surprising, frankly, if he got many votes besides his own and dingbats who think he’s a singer-songwriter, too. (That would mainly be Democrats, of course, but nothing’s impossible.)

And now, the man who just assumed the speakership of the House of Representatives, third in the line of succession to the presidency, has publicly given Trump credit for getting the job.

That’s no small thing in politics, and it’s likely to have a very big impact on both current session of Congress and next year’s presidential election.

The mainstream media’s grotesquely biased coverage of the Trump presidency and the presidential campaign and the decision by the lords of social media to engage in state-orchestrated censorship worthy of the worst propaganda practices of the old Soviet Union put it over the top.

But the remarkable fact is that despite all of that, almost 74 million voters turned out for Trump, more than any other incumbent president in the nation’s history.

The Democratic rejoinder to that, of courses, is that “81 million Americans voted for now-President Joe Biden.” But with all that has come out since the election — particularly about the FBI’s manipulation of social media revealed in the “Twitter Files” — it doesn’t take a tinfoil hat to wonder how many of those votes would have gone for Trump if the information highway hadn’t detoured for Democrats.

Now, Republicans are in control of the House of Representatives, with the investigative powers they need to bring the various scandals of the Biden family out into the public eye.

No sane person who’s followed the Hunter Biden laptop story since the time it was censored on the eve of the 2020 election to the current day thinks it doesn’t hold incriminating evidence against Joe the “big guy” Biden himself.

And the man who’s now speaker of the House of Representatives thanked former President Trump for his support in a speech aimed at a national audience.

Those words are going to come up again, from Democrats and Republicans alike, over the next year as the nation heads into the next presidential contest.

Any Republican seriously thinking about challenging Trump for the nomination is going to have to keep that in mind.

For John Bolton, on the other hand, it probably wouldn’t matter much anyway.