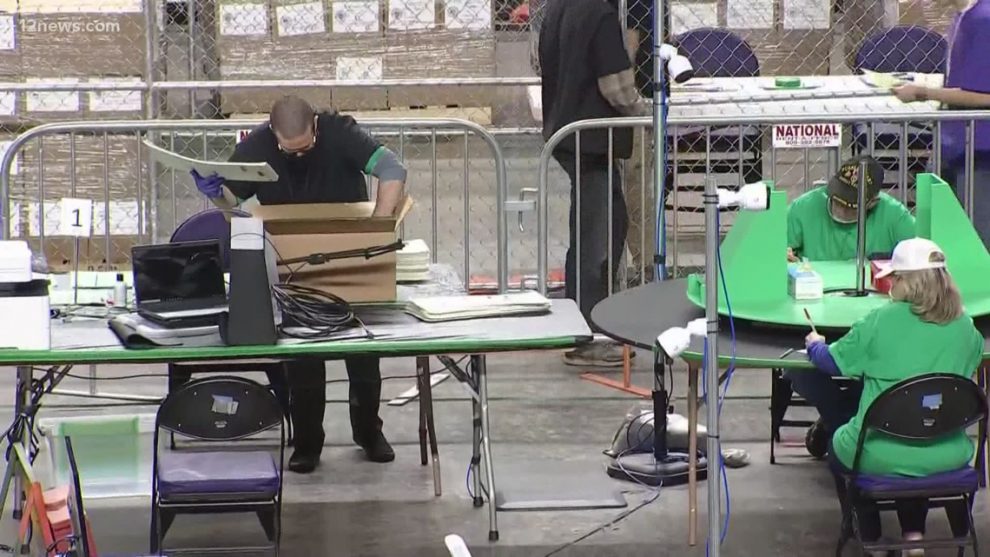 A hand recount of nearly 2.1 million ballots from the 2020 Maricopa County election is on track to wrap in a few days, but that doesn’t mean a final audit report will soon follow, an Arizona Senate spokesman said Tuesday.

“This is the hand count and the paper evaluation. The hand count will be done by the end of this week, the paper evaluation by the end of the month. But there’s other aspects of things that can, and I hope will, be happening simultaneously or maybe a little bit after that, and then there will need to be a few weeks for putting the report together.”

He said that in addition to an examination of mail ballot envelopes for signatures, other aspects could potentially include a second tabulation of scanned images, but he didn’t provide details about what that might entail if it happens.

Bennett said that as the hand counting winds down, available resources are being shifted to paper evaluation, which addresses questions such as: “Are there folds in the 1.9 million ballots that came in and out by mail? Are alignment marks on the fronts and the backs of the ballot aligning as authentic ballots should? Is there a depression in the oval where a human hand-held device would have filled in that oval as opposed to an inkjet printer or a Xerox machine or whatever you might think?”

He said the auditors are also looking for expected differences between preprinted ballots and those printed out on demand at voting centers.

“So, all kind of characteristics about the ballots that confirm or question their authenticity,” he said.

State Senate Republican leaders who ordered the audit hired Bennett, a former Arizona secretary of state, as their representative during the process, which began at the fairgrounds arena on April 23. The only races being recounted are president and U.S. senator, seats Democrats narrowly won in the county and state.

The operations paused May 14 because of high school graduation ceremonies previously booked at the Coliseum and resumed 10 days later. Under a second lease deal, the building is available to the auditors through the end of June.

Maricopa County previously authorized two audits of its November 2020 general election by independent contractors who are certified by the National Institute for Standards and Technology and the U.S. Elections Assistance Commission.

Those audits found no problems with the count, but state Senate Republicans subpoenaed the county for access to its ballots and voting equipment at the urging of supporters of Donald Trump who refuse to accept President Joe Biden’s narrow victory in Arizona.

After winning a legal fight to enforce the subpoena, Senate President Karen Fann hired several vendors, with Florida-based Cyber Ninjas as the lead contractor, to examine the ballots, machines and voting systems.

Questions have since arisen about the sources of funds being raised in the name of the audit as well as unorthodox methods of inspecting ballots.

Maricopa County officials, most of whom are Republicans, have defended the integrity of their election operations and questioned the auditors’ competence, methods and intentions.

Fann has said the aim of the audit is to restore faith in the election system and find ways to improve Arizona’s voting laws, not to reverse the result of the election.

Bennett wouldn’t speculate about what changes might be made in response to the audit.

“Until a complete, comprehensive report is issued, we would not be able to entertain recommendations of what can Arizona do better,” he said Tuesday.