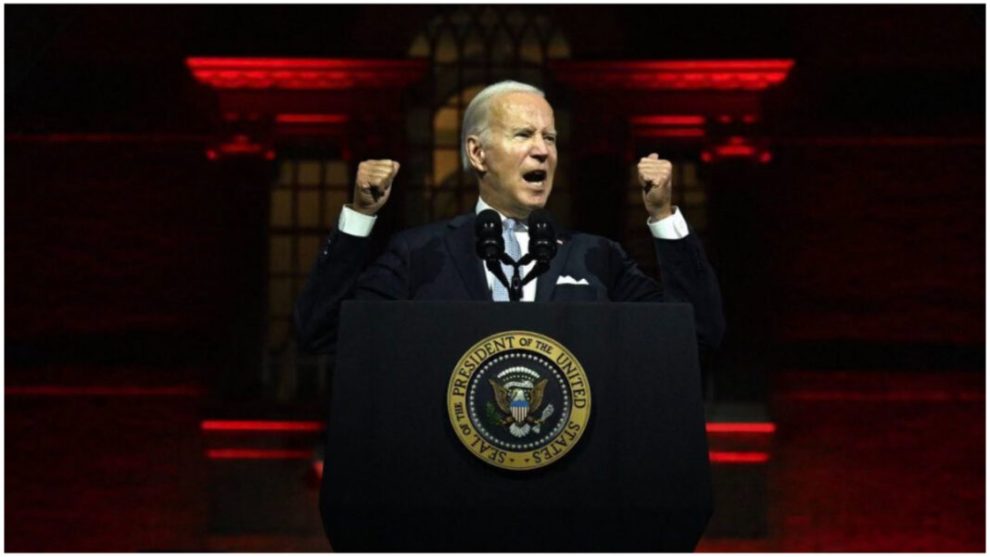 I’ll say this much for failed presidential candidate Hillary Clinton: After she uttered the phrase “basket of deplorables,” she stayed away from it for the rest of her campaign.

First, it was “ultra-MAGA.” Now, it’s “MAGA Republicans” — politicians and voters who he says “are a threat to the very soul of this country.”

Donald Trump and MAGA Republicans are a threat to the very soul of this country.

In a prime-time speech from Independence Hall in Philadelphia — with ominous red background lighting, apparently because Biden’s team has been watching a lot of dystopian movies lately and thought making the president look like Big Brother was a wise move — Biden told America that, because of “MAGA Republicans,” we now face an “assault” on “equality and democracy.”

“Equality and Democracy are under assault. We do ourselves no favor to pretend otherwise,” says President Biden, at the beginning of his remarks tonight.

"Equality and Democracy are under assault. We do ourselves no favor to pretend otherwise," says President Biden, at the beginning of his remarks tonight.

"Donald Trump and the MAGA Republicans represent an extremism that threatens the very foundations of our Republic." pic.twitter.com/Yc9sdolykO

“MAGA Republicans have made their choice,” Biden said, as per a White House transcript. “They embrace anger. They thrive on chaos. They live not in the light of truth but in the shadow of lies.”

Yeah — because if you want to get away from “anger” and “chaos,” choose the party led by the irate old grandpa ranting in front of an ominous, crimson-lit Independence Hall. The tone of the speech was enough that even CNN (not known for its anti-Biden, pro-MAGA sympathies) called the tone “strident.”

Still, the outlet claimed “Biden attempted to separate Trump’s most loyal followers from the Republican Party as a whole. And as he concluded, he sought to strike a more upbeat note, saying it was still within voters’ power to rein in the nation’s darkest forces.”

All right, then. Who sounds like a foundational threat to America: These “MAGA Republicans” who sounded off on Twitter after the speech was over, or the foaming-at-the-mouth president who delivered it?

I am a MAGA American and I'm not apologizing for it

Joe Biden knows NOTHING about me!

And, as many noted, Biden would rail against “MAGA Republicans” just moments before trying to cast himself as a uniter.

“Then he says, ’empathy is the fuel of democracy-the willingness to see each other not as enemies but as fellow Americans…’!!!”

Standing in front of a hellish red background Biden called half the country, the MAGA Republicans "threats" & "clear and present dangers"

Then he says, “empathy is the fuel of democracy-the willingness to see each other not as enemies but as fellow Americans…”!!!

That’s actually a line from the speech, more or less — Biden said it was “empathy that fuels democracy,” a slight (but not substantive) wording difference. And just moments after casting his fellow Americans as “threats.”

By the way, as conservative tweeter Greg Price noted, this is the “MAGA Republican” agenda the president was railing against on Thursday night:

What part sounds extreme to you?

Sounds like a bunch of “anger” and “chaos” to me!

Meanwhile, to sample the other side, here’s Biden backer and Project Lincoln co-founder Rick Wilson displaying some of the “empathy that fuels democracy”:

Judging from the MAGA shitfit hissy meltdown in my timeline, the speech struck home hard.

Yeah, apparently some people are unhappy with being labeled “a threat to the very soul of this country” by the president. The empathetic, uniting response is “Cry harder, whingers.”

But the disunity, clearly, is coming from those “MAGA Republicans,” with all their “anger” and “chaos.” Right.

Again, say what you will about Hillary Clinton, at least she knew when to quit with the “basket of deplorables.” Biden is apparently planning to ride “ultra-MAGA” and “MAGA Republicans” all the way to Election Day.

I’m guessing he slept through 2016 — because we know how this movie ends. All Joe Biden did on Thursday night was kick the hornet’s nest.