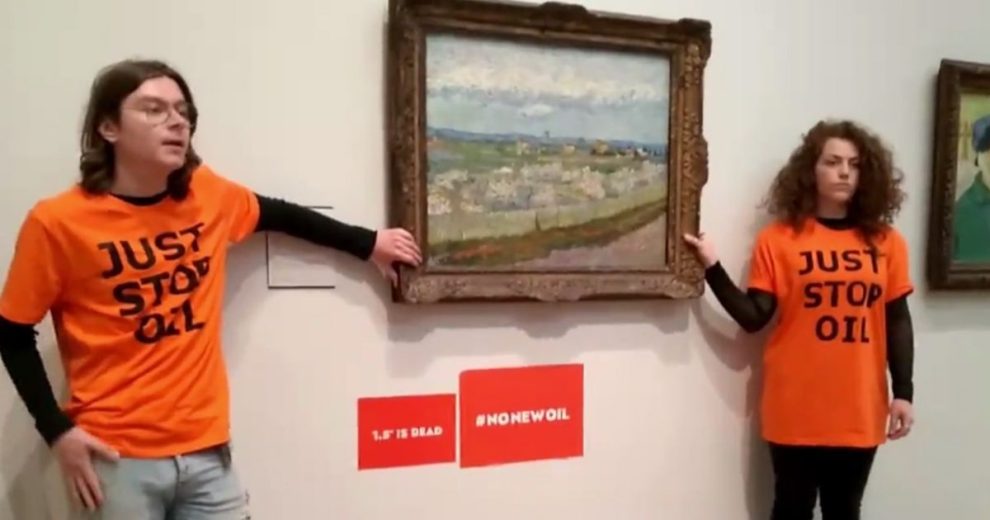 Activists at a group calling itself Just Stop Oil now face a more immediate battle: just stopping the legal system for sentencing two of its activists for gluing themselves to a priceless Van Gogh painting in London.

Telling observers that “normal cannot continue,” the two activists seem to have inspired nothing but scorn for the stunt at the Courtauld Gallery in London on Thursday.

To scorn, you can add derision from U.S. GOP Sen. Ted Cruz of Texas, who went viral for pointing out the ultimate irony of the group’s act.

The Van Gogh incident — call it a “sticky but mostly peaceful protest” — took place at the Courtauld Gallery in the British capital, according to the U.K. Daily Mail. Two activists with Just Stop Oil affixed themselves to the iconic “Peach Trees In Blossom” painting and began spouting drivel like this:

At the risk of sounding like Joe Friday upbraiding some beatniks, these two could have plausibly hailed from a group calling itself Just Stop Hair Salons.

A day earlier, the Mail reported, the protesters had glued themselves to another painting, Horatio McCulloch’s “My Heart Is In The Highlands” at the Kelvingrove Art Gallery in Glasgow. They also graffitied their logo on the gallery’s floor and walls.

“The Thomas Crown Affair” this wasn’t, but the British press felt compelled to give significant coverage to a bunch of art-gallery vandals, all because they were Art Gallery Vandals With a Cause™:

And it’s not just art galleries, either! Louis McKechnie, the eco-babbler on the left, chained himself to the goalpost during a critical English Premier League soccer match between Everton and Newcastle United earlier this year:

And it’s not just art galleries, either! Louis McKechnie, the eco-babbler on the left, chained himself to the goalpost during a critical English Premier League soccer match between Everton and Newcastle United earlier this year:

Same lad that chained himself to the goal at Everton. Enormous bottle pic.twitter.com/ASnsjit67P

Now, as for that protest, I’m fine. I’m an Everton fan (or “supporter,” to use the proper “football” terminology) and we’ve been so bad this season that we’re at risk of getting kicked out of the top league — so some eco-extremist on the field (sorry, “pitch”) that distracts my ire from the team I root for, however briefly, is welcome. It’s like getting a swift kick in the shins from the hygienist during a root canal: Suddenly, I’m not so angry at the dentist.

“It is immoral for cultural institutions to stand by and watch whilst our society descends into collapse,” he said in a statement, according to ArtNet. “Galleries should close. Directors of art institutions should be calling on the government to stop all new oil and gas projects immediately.”

“We are either in resistance or we are complicit.”

Sen. Ted Cruz, however, pointed out the irony here:

And it didn’t just stop there:

And that superglue is petroleum based. As well as their clothes, shoes, hair products, and the bus they rode there.

Well, it turns out they’re complicit, too, much as they think this constitutes resistance.

For all the talk about these hooligans’ hypocrisy and ignorance, I don’t think enough media outlets have covered just how much of the game these eco-fascists have given away via this protest — and their statement that it’s time for art galleries to shutter in the name of solidarity.

I don’t use that term “eco-fascists” lightly, either: Their explicit aim is for all galleries to close down, shutting humanity off from artistic enrichment (and whatever you call Jackson Pollack’s dreck) until their demands are met. Same goes for soccer matches, one presumes, and whatever form of entertainment they believe adds to, or distracts from fighting, climate change. They want nothing less than a pre-industrial society, sans the occasional form of merriment. They’ve found a semi-coherent way to merge the philosophy of Ted Kaczynski with the public policy prescriptions of Nicolae Ceaușescu. But only until their demands are met and things turn the corner, I’m sure.

The problem is that, like all activist groups, their demands are never met. And yes, they might use oil paintings to make their point, affix themselves to those paintings using petroleum-based glue and spray-paint, wear petroleum-derived products, use petroleum-derived shampoos and get to where they’re going in some kind of vehicle that used fossil fuels to propel or manufacture it. You’re missing the message, though: All animals are equal, but these shameless animals are a whole heck of a lot more equal than the rest of us.

You’d think this group would be seen as the ridiculous fringe. You’d be wrong.

They have over 20,000 followers on Twitter and a pinned video message of support from Chris Packham — a respected British naturalist and BBC presenter — pinned to the top of their account.

Knowledgeable experts across the globe have been coming out in support of Just Stop Oil.

Chris Packham is a champion for the protection of wiildlife and cares deeply about sustaining life on earth.

Each of us must consider the action necessary to avoid “total societal collapse” pic.twitter.com/qocHM4kwNT

Yes, there’s a good laugh to be had over the irony, as Sen. Cruz pointed out.

Don’t laugh too long or too dismissively, though.

If we don’t take these thugs seriously, the entire patrimony of human progress and Western civilization will be sacrificed at the altar of arrant totalitarians who promise us nothing less than a pre-industrial version of the Soviet Bloc.