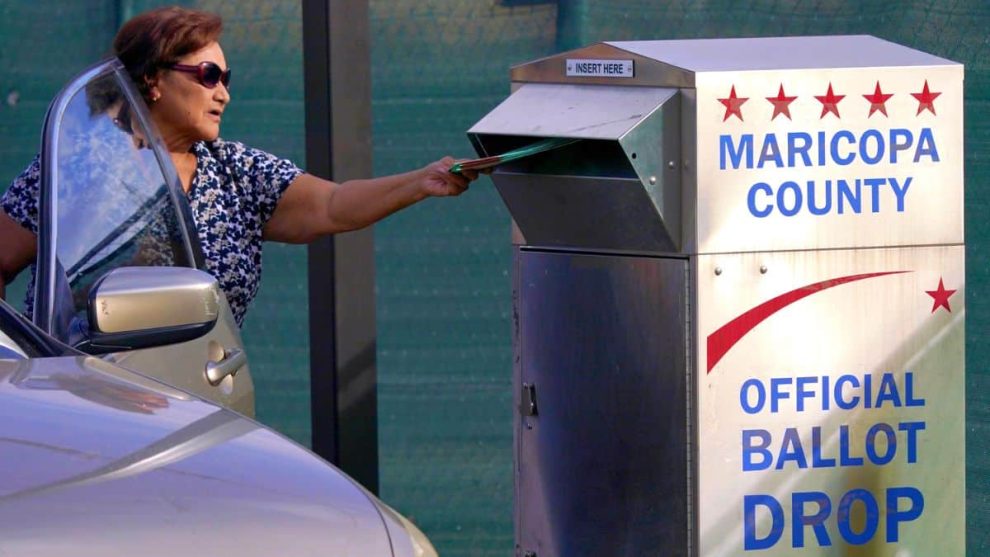 Conventional wisdom says the place has gotten more purple because we’ve had an influx of Democrats from California. I blame Illinois, however. There’s been some sort of unwritten law for a long time that residents of Chicago beeline for my desert as soon as they get sick of ducking bullets.

Wherever they’re coming from, a lot are moving to Phoenix which is in — you guessed it — Maricopa County.

There’s no accounting for taste.

As we have all seen this week, their counting skills are rather suspect.

There were a couple of updates from the snail’s pace count today, but Catherine writes about more maddening news that came out of the Maricopa clown car on Thursday:

Maricopa County, Ariz. has announced that its vote count will not be completed Friday, meaning election results will likely not be known till after the weekend, as the Post Millennial reported. Apparently, Maricopa is counting at a rapid rate of five votes an hour…?

News Nation network correspondent Ali Bradley tweeted, “Spokesperson for #MaricopaCounty elections tells me the majority of ballots won’t be done being counted until after the weekend. They initially anticipated 95-99% of ballots to be completed by Friday. An historic 290k ballots were dropped off #ElectionDay causing the delay.” An “historic” ballot drop. Let’s hope they didn’t come from the residents of the local graveyard.

It’s not like this is important or anything, so why not take the weekend off, right?

Honestly, I could hand count these votes faster than the “tabulators” in Maricopa County are getting the job done.

Every excuse offered by Maricopa County election officials for the myriad problems there this week has been beyond pathetic. The printers weren’t set right. Sixty of them.

There is no acceptable reason to stop counting votes. None. Zero. Shut up, I don’t want to hear it.

As I have been fond of saying since 2020, I didn’t used to be much of a conspiracy theory guy and now I’ve got a walk-in closet full of tinfoil hats. With the way that the Democrats’ flying monkeys in the mainstream media have been insisting that any suspicions about fraud in Maricopa County are “misinformation” have got me smelling rat carcasses all over the place.

Kari Lake should win Maricopa County, California and Illinois transplants notwithstanding. This stalling makes it feel as if the Magic Mail-In Ballot Machine has been borrowed from Philadelphia.

That doesn’t seem too much to expect.