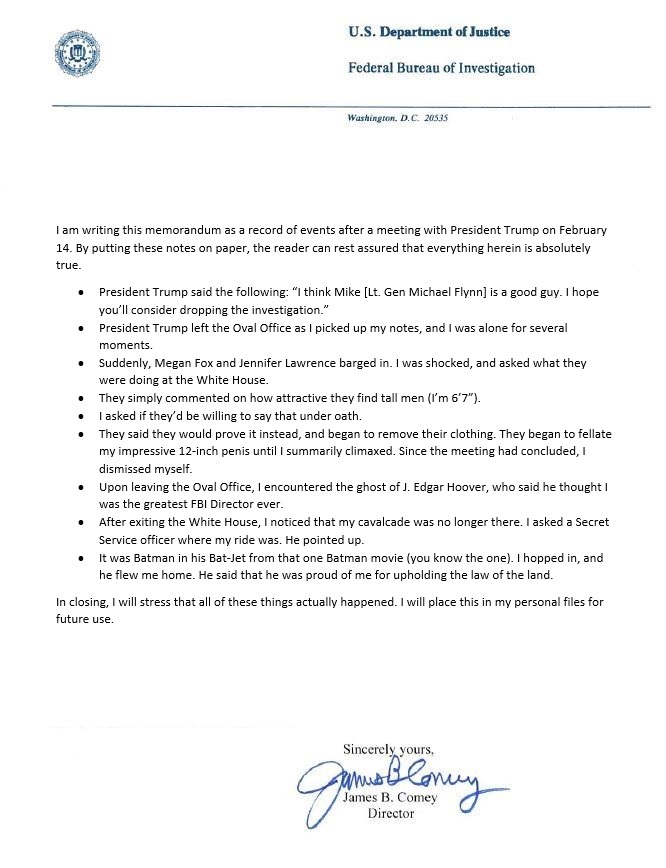 A federal judge ordered the FBI Thursday to turn over former Director James Comey’s memos, including the notes that he took during his infamous one-on-one meetings with President Trump.

Judge James E. Boasberg of the U.S. District Court for the District of Columbia ruled in favor of CNN, USA Today, Judicial Watch, and other outlets, telling the DOJ that it must hand over the Comey memos to the court for review and possible public release.

The memos include the notes that Comey said he leaked to the media to spark the appointment of a special counsel.

Media and watchdog groups have fought to obtain documents relating to Comey’s notes through the Freedom of Information Act since May 2017, when the existence of the Comey memos was first made public. The memos recount conversations between Comey and Trump that are hotly disputed, and the outlets argue that the public has a right to their contents.

But the DOJ has opposed their release. A significant amount of information from the Comey memos has already been made public, but other information has been redacted or otherwise concealed from public view. CNN is also fighting for access to the Justice Department’s sealed arguments explaining to the court why the DOJ is opposing the release of the memos.

Trump fired Comey on May 9, 2017. One of the memos leaked by Comey was detailed in the New York Times on May 16, 2017, and Comey later explained to Congress that he leaked it to a friend to help prompt the special counsel investigation. Special counsel Robert Mueller was appointed the day after the New York Times report to investigate possible coordination between the Trump campaign and the Russian government during the 2016 election.

Earlier in March of this year, the DOJ argued that disclosing information related to the Comey Memos could impede the Mueller probe, saying it “would reveal information about the focus and scope of the Special Counsel Office’s investigation that have not been officially publicly disclosed, and which if disclosed now could reasonably be expected to cause … potential harms.”

The DOJ has also argued that the information being requested by CNN is sensitive and would have harmed the investigation.

While the special counsel investigation was ongoing, the court seemed inclined to agree with this argument.

Mueller has now concluded his investigation, however, turning over his final report to Attorney General William Barr on Friday.

CNN responded to the DOJ’s arguments a week ago, telling the court that they had “shown that the FBI’s justifications for redacting the Comey Memos are illogical and implausible.”

CNN’s attorneys argued that the redacted information wouldn’t hurt U.S. national security or foreign policy if it is revealed to the public. The redactions likely include: Which foreign leader was the first to congratulate Trump on his inauguration, who in the White House received a defensive briefing in February 2017, information on the investigation of Mike Flynn including whether he was being surveilled under FISA, details related to the so-called Trump Dossier, information on Trump’s comments about Vladimir Putin, and more.

The Comey memos must now be turned over to the court by April 1.