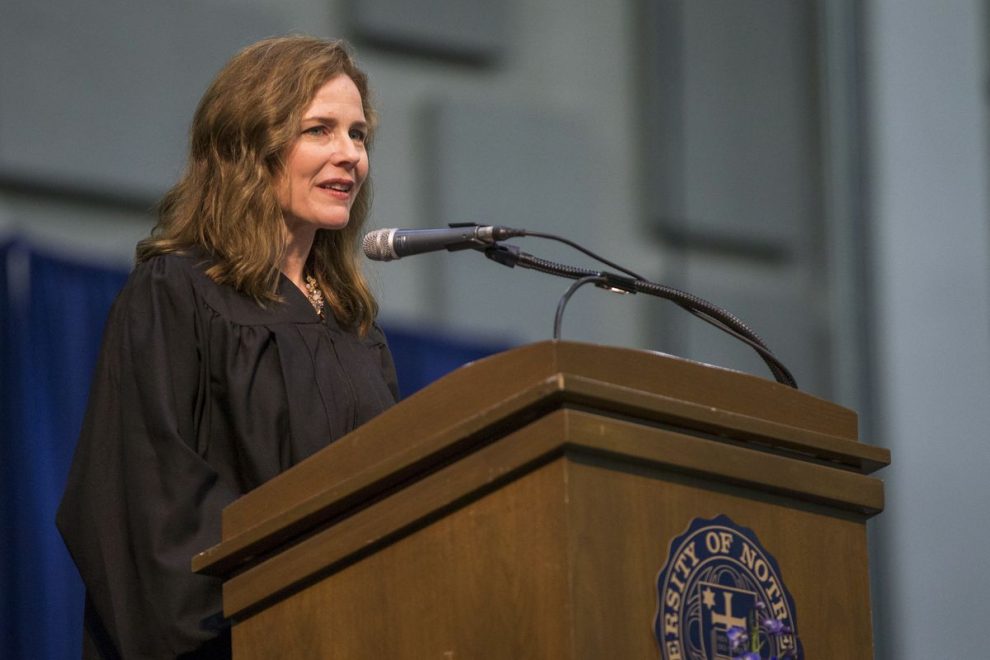 Several media outlets are reporting that President Donald Trump will, on Saturday, announce that he will nominate Judge Amy Coney Barrett to be the next Associate Justice on the U.S. Supreme Court, replacing the late Ruth Bader Ginsburg.

Several GOP campaign officials across different elements of the party also confirm the pick to Breitbart News, saying that they have been preparing fundraising and promotional materials to be sent out after the selection is announced and that Barrett’s name and image are in them. Several current and former administration officials also echoed that they believe it will be Barrett, but again, every source is cautioning that this is President Trump, and he could change his mind.

The Club for Growth, a leading conservative organization, for instance on Friday night published an ad on YouTube urging senators to confirm Barrett to the Supreme Court:

Trump, asked Friday night if the selection is Barrett, declined to confirm it was her. “I haven’t said it was her but she is outstanding,” the president said.

Barrett is particularly popular among GOP senators as well, as Sen. Tom Cotton (R-AR) on Breitbart News Daily earlier Friday on SiriusXM 125 the Patriot Channel heavily suggested she would be the pick. Other senators, like Sen. Mike Lee (R-UT), have made very public pushes for her to be the pick. Senate Majority Leader Mitch McConnell has also reportedly advised Trump of Barrett’s popularity among senators.

The White House and President Trump have not yet confirmed that Barrett will be the selection, and sources caution that the president could change his mind in the final hours before his scheduled 5:00 p.m. ET Saturday announcement.

The Hill newspaper published a report Friday afternoon citing a number of GOP officials saying Barrett is the pick.

Two sources with knowledge of the process said that Barrett is the pick, barring any change of Trump’s mind before Saturday evening’s announcement in the White House Rose Garden. A Republican official said Trump began informing allies on Capitol Hill of his intention to nominate Barrett, a judge on the 7th Circuit Court of Appeals.

Trump met with Barrett on Monday at the White House, and according to The Hill, he was “impressed” with the meeting.

Barrett was a finalist in the running for the nomination last time there was a Supreme Court vacancy, but President Trump selected now Justice Brett Kavanaugh instead.

Barrett, assuming she is the nominee and confirmed by the U.S. Senate, would be the third Justice whom Trump has confirmed to the Supreme Court.

In addition to The Hill’s report, CNN’s Pamela Brown and Jamie Gangel also wrote that they believe the selection will likely be Barrett:

President Donald Trump intends to choose Amy Coney Barrett to be the new Supreme Court justice, according to multiple senior Republican sources with knowledge of the process. In conversations with some senior Republican allies on the Hill, the White House is indicating that Barrett is the intended nominee, multiple sources said. All sources cautioned that until it is announced by the President, there is always the possibility that Trump makes a last-minute change but the expectation is Barrett is the choice. He is scheduled to make the announcement on Saturday afternoon.