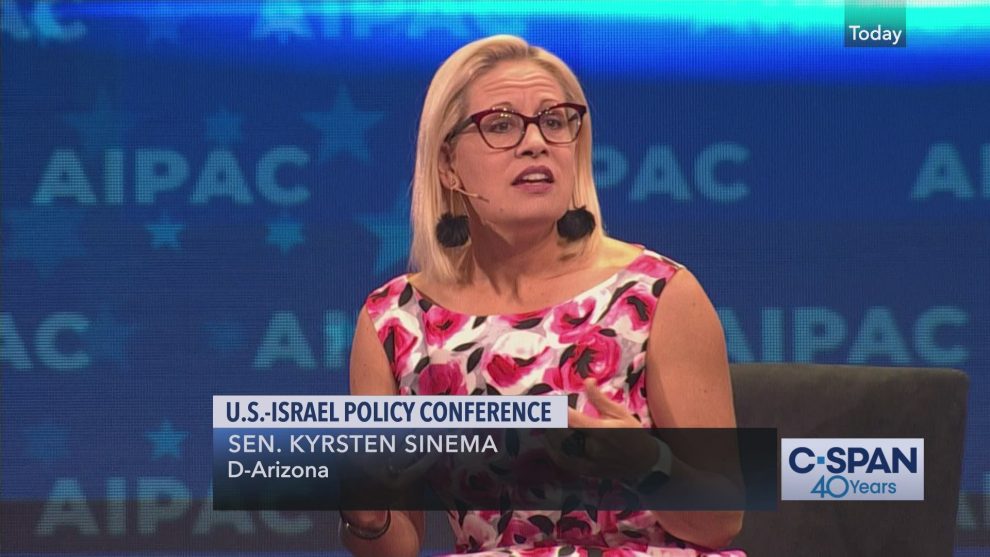 As the Democrats continue unimpeded in their quest to fundamentally transform the United States, Senate Majority Leader Chuck Schumer has run into an unexpected roadblock. A Democratic senator has said “no way” to the party’s dream of eliminating the filibuster — and it’s not Joe Manchin.

She sounds pretty clear about that, doesn’t she?

For all the focus on Manchin being anti-nuke on filibuster, this is what a spokes for @kyrstensinema tells me + @mikedebonis:

The Senate website defines the filibuster as an “informal term for any attempt to block or delay Senate action on a bill or other matter by debating it at length, by offering numerous procedural motions, or by any other delaying or obstructive actions.” This device is meant to prevent the party in the Senate minority from being completely overpowered by the majority party.

Currently, with a 50-50 balance of power in the Senate, Democrats control the upper chamber by the slimmest margin possible.

Current Senate rules require a minimum of 60 votes to pass legislation. Some Democrats have hoped to abolish the filibuster so that only a simple majority of 51 votes (50 Democratic senators plus Vice President Kamala Harris’ tie-breaking vote) would be necessary to advance their progressive agenda.

Prior to the election, the Indivisible Project, a movement dedicated to advancing the election of progressive candidates, explained why this is bad news for Democrats:

“It’s simple: none of the progressive issues that Democratic candidates and congressional leaders are discussing today will become law unless we do something about the filibuster.

“If [Senate Minority Leader] Mitch McConnell expects to be the Grim Reaper of progressive policies, the scythe he’ll use is the Senate filibuster. Unless we change the rules.”

Up until now, conservatives have been counting on Democratic Sen. Joe Manchin of West Virginia to save us from being overrun by leftist lesiglation. Manchin won re-election in 2018 in a state that went overwhelmingly for former President Donald Trump by nearly 40 points in 2020 and over 41 in 2016.

In the past, Manchin has expressed his opposition to ending the filibuster, but recent statements have left Republicans wondering.

However, Politico reported Monday that Manchin was “emphatic” that he “will not vote to kill the filibuster.” Asked if there were any scenario in which he would change his mind, the senator replied: “None whatsoever that I will vote to get rid of the filibuster.”

Perhaps he had gotten wind of Sinema’s announcement by that time.

Either way, the Arizonan’s remarkable decision comes as welcome news to all of us who have feared the radical agenda now being promoted by the left.

In 2018, then-Rep. Sinema defeated Martha McSally, a GOP congresswoman and former fighter pilot, in the race for the state’s open Senate seat.

That said, Arizona has not turned blue, and there is no doubt that Sinema’s opposition to eliminating the filibuster will be applauded by many in the Grand Canyon State.

Protecting the filibuster is essential to protecting us from the tyranny of the majority.

Even with the filibuster in place, Democrats can do and have already done a lot of damage. But their major radical initiatives, such as granting statehood to Washington, D.C., and Puerto Rico and stacking the Supreme Court, will be blocked by the Republicans.

Schumer and Sinema’s other Democratic colleagues must be seething with anger following her announcement.

Well, unless one senator decides not to end the filibuster, that is.