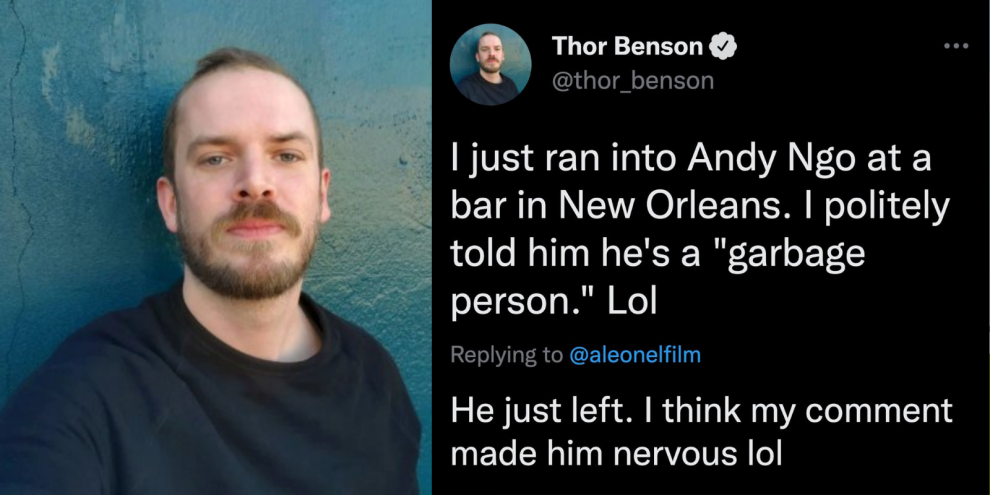 Often I wonder why I stay on Twitter. Though I like the fast-breaking news tips, the toxic stupidity, particularly among the “verified account” set, makes you wonder if the noise-to-signal ratio is high enough to bother logging in. But, then, every once in a while, there is a classic self-own that has to be seen to be believed.

If you followed the Antifa riots and insurrections over the past few years, but particularly during the summer of 2020, you know who Andy Ngo is. Andy is inarguably the most courageous voice in journalism today if the measure of courage is still putting oneself in physical danger rather than merely running the risk of not being invited to the right parties. His book Unmasked: Inside Antifa’s Radical Plan to Destroy Democracy reveals the evil nature of Antifa and its adherents as they are trying to make us all believe, just as the Mafia did, that there is no such thing as Antifa. Andy has been assaulted by Antifa goobers several times, and they are always on the lookout for them.

First off, the real garbage person in this scenario is Benson. Any person who would walk up to a private citizen in a restaurant and berate them over their politics just to get a few “likes” on Twitter has given up the right to any claim of manhood, maturity, or commonsense…and they’ve given up the right to complain if they get their ass kicked.

But then we had the most outrageous plot twist available.

.@thedailybeast tech & science contributor Thor Benson claimed he confronted me at a New Orleans bar & made me so uncomfortable that I left. It never happened—he racially profiled & harassed another Asian man. #StopAsianHate cc: @TracyConnor https://t.co/FYqrRGDMl0

Andy wasn’t in Louisiana and has proof he wasn’t in the restaurant; he was doing a GETTR live cast when the incident took place.

Thor Benson, a white freelance writer, thought he found me & instead harassed a random Asian in New Orleans & made him leave a bar. Benson's followers said the man should've been assaulted. @TracyConnor @CorinneIOZO you okay w/your contributor doing this?https://t.co/4AGDpu3YQd pic.twitter.com/C1NBGxq9VQ

Well, maybe not unbelievable. I suppose, in all fairness to “Thor,” that the left does have a problem distinguishing one Asian from another.

Flashback: During the height of the violent Portland #Antifa riots in 2020, an Asian male was accosted on the street by far-left protesters who falsely accused him of being me. He said it was the third time this had happened to him. #StopAsianHate pic.twitter.com/uEYfagVSwa

There were lots of great reactions to that on Twitter as “Thor” got ruthlessly dragged. One of the best was when he violated the First Rule of Holes by accusing Andy of lying and, in the process, confessing to what in Maryland would be assault.

There are a couple of different categories of simple assault. One is often called battery or second-degree assault, which is what most people think of when they think of assault. As mentioned previously, this kind of assault involves physical contact without consent. This contact can be in the form of a poke, putting one’s hands on someone’s shoulders, a punch, a kick, a slap, or a shove. This unwanted physical contact does not have to be violent, cause injuries, or cause lasting physical harm to be considered assault.

"If it wasn't you, why did you respond when I put my hands on you and insulted you" https://t.co/lB8ONNjw83

What is equally probable is that “Thor” saw some Asian guy, thought, “wow, if that was Andy Ngo, I’d tell him off,” and then converted the thought to action by virtue of Twitter.

One thing for sure is that there was at least one garbage person in that bar, and he’s a racist who literally thinks all Asian people look alike. The fact that he writes for left-wing publications that devote a lot of energy to documenting racist behavior just makes the whole incident a lot more enjoyable.

Twitter: Come for the news; stay for the dunks and drags.