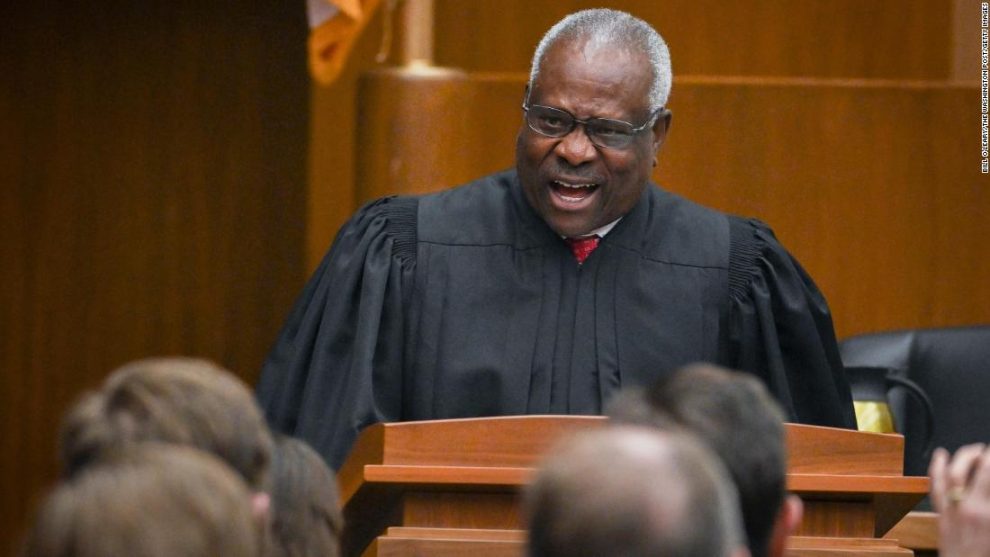 Supreme Court Justice Clarence Thomas on Friday said the Supreme Court will not be bullied just because some people will not like its rulings.

Thomas spoke Friday at the 11th Circuit Judicial Conference in Atlanta. He did not speak directly to the leak of a draft opinion in which he and four other justices appear to have decided to create a new standard for abortion in America that would allow each state to set its own rules.

Since the February draft was leaked Monday, pro-abortion protesters have taken to the streets, with some groups calling for protests at Catholic churches and at the homes of the justices who might overturn the Roe v. Wade decision that legalized abortion.

During his comments Friday, Thomas said Americans are “becoming addicted to wanting particular outcomes, not living with the outcomes we don’t like,” according to the Daily Mail.

“It bodes ill for a free society,” he said, according to The Washington Post.

“We can’t be an institution that can be bullied into giving you just the outcomes you want. The events from earlier this week are a symptom of that,” he said.

Thomas said a “different attitude of the young” indicates less respect for core institutions of government than in the past. “Recent events have shown this major change,” he said.

Thomas said that “you cannot have a free society” without stable institutions, according to CNN. Americans must “live with outcomes we don’t agree with,” he said.

Although overturning Roe v. Wade would be shattering a precedent set in 1973 when the ruling was made, Thomas said the court cannot be wedded to the doctrine of stare decisis, which is that generally, precedents should not be overturned.

Roe was never a good precedent. Those who say it’s terrible to overturn a precedent that has lasted so long should consider that other bad precedents — Plessy, for example — are also overturned after decades

“We use stare decisis as a mantra when we don’t want to think,” Thomas said, noting that the Supreme Court is the “end of the line.”

If Supreme Court justices “don’t take a look at it, who does?” he said.

During his comments, Thomas noted that while the court is divided along philosophical lines, its members are often not.

“It is really hard to see him leave,” he said.

Chief Justice John Roberts had spoken at the conference on Thursday.

“A leak of this stature is absolutely appalling,” Roberts said, according to Fox News.

“If the person behind it thinks that it will affect our work, that’s just foolish,’ he said.

In March, Thomas said that demands to make the court serve a woke agenda could undermine society.

Thomas said political rhetoric about rigging the court’s structure to produce specific political outcomes is damaging, even if it never gets past the talking stage.

In response to agitation on the left wing of his Democratic Party, President Joe Biden created a commission to study changing the court, though the commission offered no recommendations in its final report in December, according to The Associated Press.

A court that is structured to be a rubber stamp is “no court at all. That’s no rule of law at all. That’s just willfulness,” he said, according to the Deseret News. “I don’t see how that is conducive to having a free and civil society.”

“You can’t keep taking chips out of your institutions and not expect it to, at some point, be compromised. At some point, it can’t keep withstanding the efforts to undermine,” Thomas said, according to The Salt Lake Tribune.