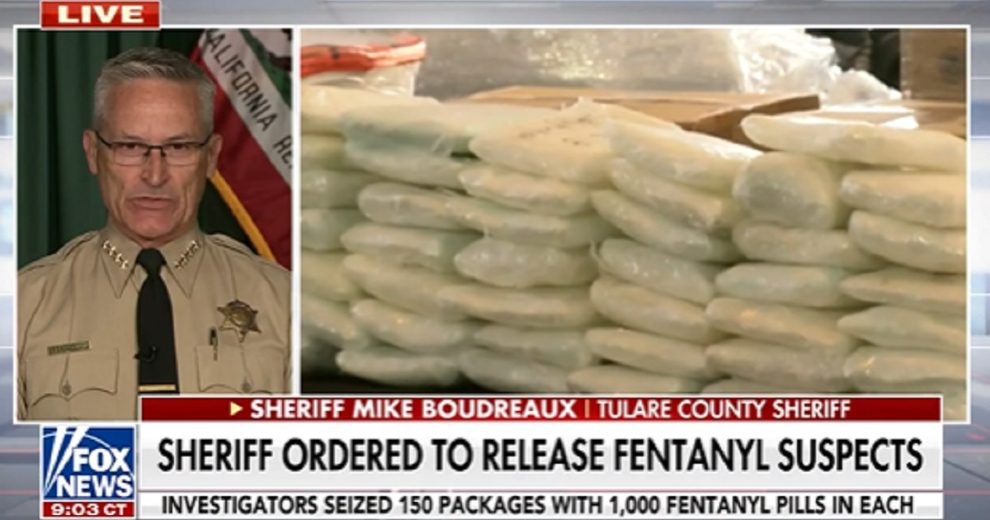 A California court ordered the release of two alleged drug traffickers less than a day after they were arrested with over 100,000 fentanyl pills, Fox News reported.

Tulare County law enforcement arrested 25-year-old Jose Zendejas, and 19-year-old Benito Madrigal, both of Washington state, after stopping their vehicle near Highway 99 and Tulare Avenue at about 7:30 p.m. Friday, according to KFSN-TV in Fresno.

The two men were found with 150,000 fentanyl pills in their vehicle, the station reported. Investigators estimated that the total amount of drugs the men had would sell for $750,000 in street value, according to KSFN.

The men were subsequently booked into the Tulare County Pre-trial facility on charges of drug possession, drug transportation, and sale of unlawful drugs.

We’ve learned that Tulare Co. Court Commissioner Mikki Verissimo signed the order to release the men. Sheriff Mike Boudreaux says on @FoxNews that “California’s system of justice is failing us all”, and that when he found out about the release of the men, he was “infuriated”.

NEW: The two men who were arrested with 150,000 fentanyl pills in Tulare, CA on Friday have been released from custody on their own recognizance as a result of a court order from a judge following a "risk assessment". The Sheriff "strongly disagrees" with their release. @FoxNews pic.twitter.com/KIdIQNCTR9

Fox did not report the reasoning for the release.

However, in an interview Tuesday with Fox News’ “America’s Newsroom,” Boudreaux blamed “soft-on-crime” California lawmakers, and said, “California’s system of justice is failing us all.”

According to protocol, inmates booked into Tulare County jails would undergo a risk assessment procedure with the county’s probation department.

Once the procedure is complete, a judge with the county court would review the risk assessment and determine if the arrested individual would be held on bail or released.

Boudreaux told Fox News that he disagreed with Verissimo’s decision to let the suspects go. However, his office had to comply with the order despite the public safety concerns.

According to authorities, police seized 150 packages each containing 1,000 fentanyl pills, when they arrested the two men. The impounded drugs amounted to enough to kill several million people, police said.

On Monday, the Tarrant County, Texas, Sheriff’s Office announced that it had arrested 11 suspects possessing 15,000 fentanyl pills and 11 firearms, according to WFAA-TV in Dallas.

The sheriff’s office said two of the suspects face charges related to a death caused by the drugs they trafficked. Officials did not provide any further details, according to the WFAA.

On Tuesday, the California Highway Police said it had interdicted a vehicle transporting around 37 pounds of pills believed to be fentanyl in Merced County, according to KSFN.

A synthetic opioid thought to be 50 to 100 times more potent than morphine, fentanyl is a highly addictive drug.

Fentanyl consumption can result in respiratory difficulty and death when taken in large doses or mixed with other substances such as alcohol, heroin, or cocaine.

The narcotic is responsible for tens of thousands of deaths annually and is the leading cause of death for Americans aged 18 to 45, according to a Fox News report from December.