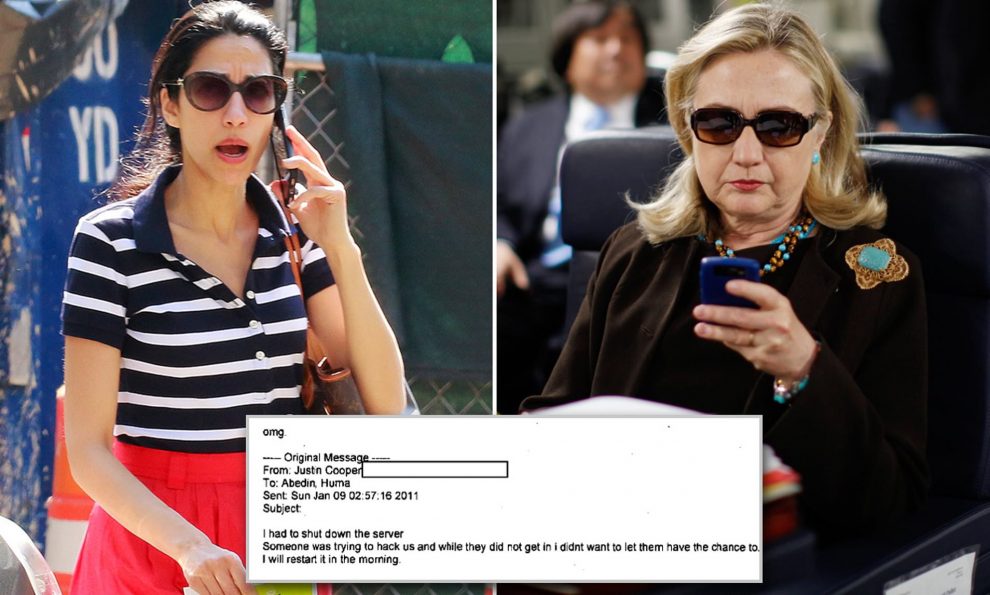 That was the three-letter response from top Hillary Clinton aide Huma Abedin — familiar Internet shorthand for “Oh my God!” — when Justin Cooper, the technology pro overseeing Clinton’s private home-based email servers, told her shortly after midnight on Jan. 9, 2011, that “someone was trying to hack us.”

The revelation was contained in a trove of newly released, partially redacted FBI documents from the agency’s investigation into whether Clinton mishandled classified information — a probe known as the “Midyear Exam.” The document release reveals numerous episodes in which the Clinton team either suspected it had been hacked or seemingly acknowledged that security measures had come up short.

In a tense email exchange, Cooper wrote to Abedin at 2:57 a.m. Sunday: “I had to shut down the server. Someone was trying to hack us and while they did not get in i didnt want to let them have the chance to. I will restart in the morning.”

At 6:30 the next morning, Abedin wrote to State Department officials — including Clinton’s chief of staff at the time, Cheryl Mills — “Don’t email hrc [Hillary Rodham Clinton] anything sensitive. I can explain more in person.”

Later that year, Cooper wrote to Clinton, “It is a constant fight to keep up with the security measures and unfortunately we keep seeing reminders of why we need to.”

And in August 2010, according to the documents, Clinton aide Monica Hanley wrote to Abedin after receiving a suspect spam email: “Yeah I wonder if someone hacked in. that stinks.”

The files also included the handwritten notes of agents’ March 2016 interview with Cooper, who described the presence of a “SCIF” — an acronym “sensitive compartmented information facility” — in Clinton’s Chappaqua, N.Y., and Washington, D.C., homes.

According to Cooper’s comments as described in the notes, the server rooms in both locations were often left exposed.

“Open door — not always secured, sometimes when HRC not @ residence was not closed. (both resid),” the notes said.

The interview document also said Cooper described “safes” in at least one of the SCIFs, followed by a note from the agent, “No understanding of when open/closed” — although it was unclear whether that comment referred to the safes or the doors leading to the server room.

There were “home computers” but “no secure computers” in the SCIFs, according to the notes. However, “phone/fax/video” were “secure” in the residences.

Cooper, a previous FBI report said, acknowledged at least “two instances where he destroyed Clinton’s old mobile phones by breaking them in half or hitting them with a hammer.”

In August, it was reported that a Chinese state-owned company hacked Clinton’s email server, then inserted code that forwarded a copy of virtually every email she sent or received after that — a revelation President Trump demanded be investigated.

The Daily Caller reported that the firm operating in the D.C. area wrote code that was then embedded in the server and generated a “courtesy copy” for almost all her emails — which were then forwarded to the Chinese company.

The code reportedly was discovered in 2015 by the Intelligence Community Inspector General (ICIG), which then warned FBI officials of the intrusion. A source briefed on the matter confirmed to Fox News the details of The Caller’s reporting, and said that the ICIG was so concerned by the revelation that officials drove over to the FBI to inform agents — including agent Peter Strzok, seen as a strong Trump critic — of the development after it was discovered via the emails’ metadata.

The source told Fox News the hack was from a Chinese company, describing it as a front for Chinese intelligence.

A second source briefed on the matter told Fox News that officials outside the FBI indicated code on the Clinton server suggested a foreign source was receiving copies of emails in real time.

The FBI disputed the claims: “The FBI has not found any evidence the servers were compromised,” an FBI official told Fox News at the time.

However, a May 2016 email from Strzok, obtained by Fox News last year, said “we know foreign actors obtained access” to some Clinton emails, including at least one “secret” message “via compromises of the private email accounts” of Clinton staffers.