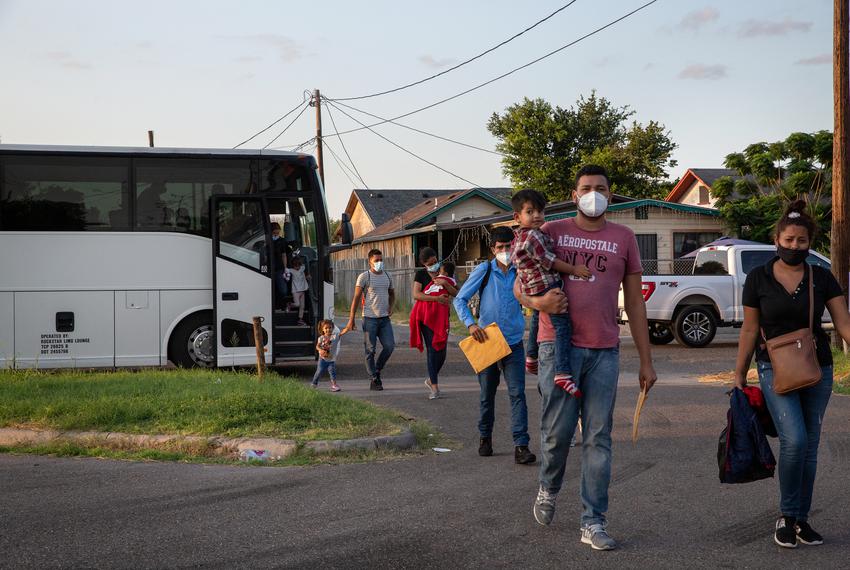 Texas Gov. Greg Abbott is to be commended for sticking to his pledge made last week to start sending migrants who cross the border illegally to Washington, D.C., so lawmakers can get a taste of the havoc President Joe Biden’s administration has created.

“We are sending them to the United States Capitol where the Biden administration will be able to more immediately address the needs of the people that they are allowing to come across our border,” Abbott said when announced his new policy on April 6.

The governor also announced enhanced inspections of vehicles crossing the border to check for illegal immigrants and contraband.

"The Biden Administration will be able to more immediately address the needs of the people that they’re allowing to come across our border." pic.twitter.com/MWM8IqCici

“I think it’s pretty clear this is a publicity stunt,” she said. “The governor of Texas or any state does not have the legal authority to compel anyone to get on a bus.”

"I think it's pretty clear this is a publicity stunt… The governor of Texas or any state does not have the legal authority to compel anyone to get on a bus." pic.twitter.com/1dTsxoXJG6

True enough, but the migrants are voluntarily getting on the buses, and now three buses later, it’s becoming a D.C. problem too.

Abbott’s enhanced inspections at the border are also having a real impact.

KVUE-TV reported that the top Texas official has now entered into agreements with three Mexican governors requiring greater enforcement measures on their side of the border.

The most recent was signed Thursday with Mexican governor of Chihuahua, María Eugenia Campos Galván. The Mexican state includes the city of Juarez, which is across the border from El Paso.

“The agreement between the two states will allow the Texas Department of Public Safety to return to random vehicle searches at the border instead of the enhanced searches that have led to hours-long traffic at border ports of entry,” KVUE-TV reported.

“Gov. Campos has begun and will continue enhanced border security enforcement measures on the Mexico side of the border, both at ports of entry as well as along the border to prevent illegal immigration from Chihuahua into the state of Texas,” Abbott said.

Texas Attorney General Ken Paxton related to Fox Business Network host Mario Bartiromo Friday how the governor’s implementation of enhanced inspections precipitated these agreements. He argued that Biden had, in effect, entered into a tacit agreement with Mexican cartels.

“The way it works is the cartels know they can transport humans and drugs across our border, and the Biden administration will pick up those people and move them around the country. It’s a tacit agreement,” Paxton said.

“The cartels know the deal and they’re profiting greatly,” he added.

Abbott “has figured out we can stop trade along the border, slow it down, and it will create pressure on Mexico and some of their governors to work out a deal to help us with border security,” Paxton explained.

He stated that Abbott is doing what the Biden has refused to do, which is protect American citizens “from drugs and human trafficking.”

“It’s effective because you hit the Mexican government in their pocketbook, and no one wants that,” he said.

You’ve got to hand to Abbott and his team for forcing Biden’s hand and highlighting the problems his open border policies are creating.

The D.C. Democrats are likely coming to the realization Abbott means business, and meanwhile the buses will keep on coming.