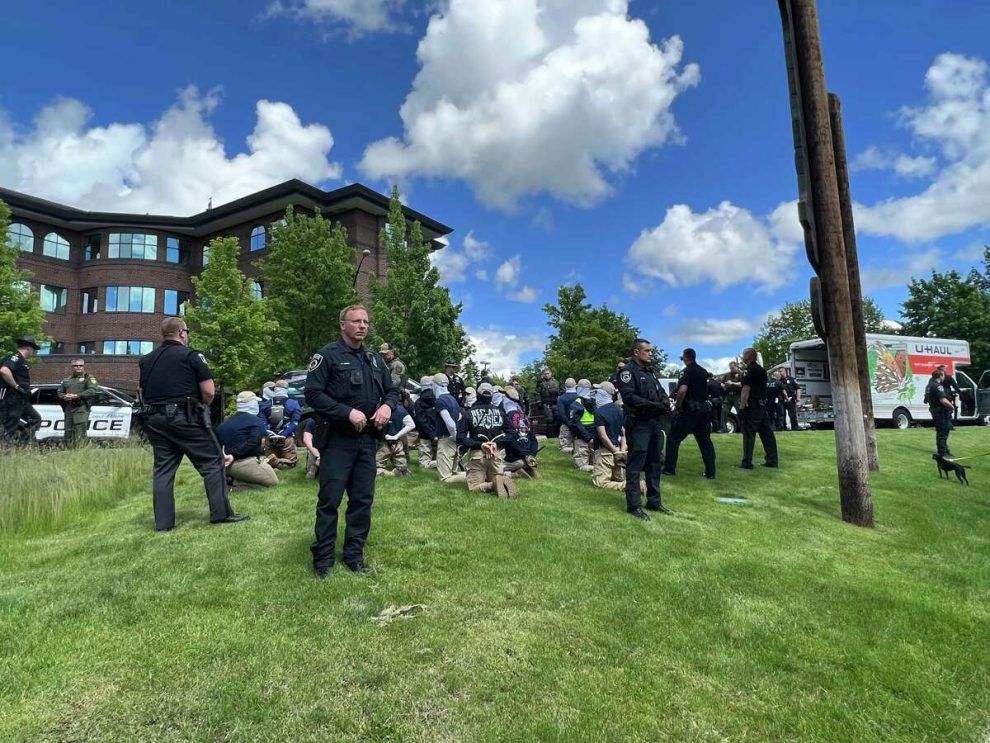 Saturday, a “bizarre sexual practices” group held their annual recruiting and grooming look-at-me celebration event in the city part in Coeur d’Alene, Idaho. A competing event by “Guns d’Alene” was dedicated to protecting children and the Second Amendment. That combo gave the heebie-jeebies, or perhaps the collywobbles, to some in the gay pride celebration.

if you are attending pride this year please consider having a safety plan well in advance with your people. nothing more important than your well-being. anti-kettling, comms, meeting points (in case of no phone coverage), perimeter/exits, all of it. just give it a review at least

Police were present in force and, as I posted in Coeur d’Alene Police Threaten Preachers With Arrest to Protect Gay Pride Event in City Park, fairly indiscriminate about violating the First Amendment without the benefit of the famous COVID Exception to the Constitution.

The reason for some of the apprehension became clear. Several sources have reported that Antifa was on the scene, and some of their goons were detained.

What are the odds that antifa would be detained the same day that patriot front is at Couer d'Alene ID?https://t.co/2GA1IVJ1bd pic.twitter.com/43oeg7xmYB

More interesting was the arrival of those khaki-clad and bemasked defenders of America, the Patriot Front.

We’ve encountered this group of yahoos in the past. They show up at events where violence seems possible and try to be a catalyst for events without doing anything. For instance, in this video, notice the protection the police provide to this group.

The interesting thing about them is the way they move in close coordination with the police, that they load people into U-Haul vans in plain sight of the cops (you can’t carry passengers in the back of a van), and that the police keep media far enough away that the registration numbers on the vans can’t be seen. In Chicago, the police let them load into private vehicles with their license plates taped over.

A caravan of over a dozen private vehicles with taped-over license plates pulls up, the Patriot Front members load up their shields and flags outside Soldier Field here in Chicago pic.twitter.com/JYUl1RDOps

Nothing suspicious about this, of course. Read our coverage of the Patriot Front at Patriot Front: Incels in Khakis, Everyone Mocks the Matching Khaki-Clad, Patriot Front’s Latest Effort, Feds in Khaki Pants March in DC, and A ‘Right-Wing’ Group Marches on the Capitol – and Leaves a Lot of Questions.

In Coeur d’Alene, things followed a different script. When the Patriot Front arrived, some 31 members of that august group were taken into custody on charges of “conspiracy to commit mopery with the intent to loiter,” sorry, I mean conspiracy to riot.

Coeur d’Alene Police Chief Lee White told reporters that 31 individuals affiliated with the group were in police custody and charged with conspiracy to riot.

The group had traveled from all over the country to sow chaos during the LGBT+ event, White said. They came from states like Texas, Utah, South Dakota, Arkansas, Oregon, and Virginia. Law enforcement was quick to derail the group’s plans, he said, thanks to “one concerned citizen.”

“We received a telephone call from a concerned citizen who reported that approximately 20 people jumped into a U-Haul wearing masks, they had shields, and ‘looked like a little army,’” he said.

“They had shields, shin guards, and other riot gear with them, including at least one smoke grenade,” White said, adding that paperwork including an apparent “operations plan” had also been found in the group’s U-Haul. It was not immediately clear if they had any firearms.
Video from the scene of their arrest showed several members of the group kneeling in the grass, their hands zip-tied behind their backs, as counter-protesters jeered and shouted “losers!”

Approximately 20 members of the group, all clad in their trademark balaclavas, blue shirts and khakis, could be seen kneeling as police officers stood around them. Local reports said members of the group were unmasked before being placed in police vans.

The march of christo-fascists came towards the park. They appeared to try to come in but it seems like the cops told them not too. Unsure if they’ll try again. It also seems like the cops are taking order from feds today. Can’t confirm but that’s what it appears from observation pic.twitter.com/xLpk0IkKTj

Dozens of masked members of the white supremacist group Patriot Front were arrested as they prepared to stage a riot near a Pride event in Coeur d’Alene, Idaho https://t.co/Rd5kfjU0Ah

Other law enforcement sources said an informer in their ranks had ratted them out. Imagine my shocked face over this bunch of goobers having an FBI informant in their ranks. The real shock is why there weren’t at least 25-30 calls from FBI informants.

I’m not going to say that the Patriot Front is a federally managed conglomeration of f***-wits with a stiff mixture of confidential informants and FBI agents any more than I’d say that about the Gretchen Whitmer kidnapping plot and the Hutaree Militia. We know the federal government is actively involved in instigating violence and using that violence as grounds for surveillance and criminalization of First Amendment protected activity (the judge in the Hutaree Militia case entered a directed verdict of Not Guilty declaring that complaining about the government was not a crime).

Fed 1: Definitely not a firearm in my pocket… I’m just happy to see you.

These guys would be great undercover at a golf course on Martha’s Vineyard. https://t.co/4YEzaDix43

What an absolute joke. It’s a shame at the hard-working men and women of law-enforcement, the actual door kickers, are being led by such clowns and forced into these bullshit situations to entrap Americans. https://t.co/wXzeQ5gfu4

I hope being publicly unmasked in Coeur D’Alene puts this bunch out of business. The last thing we need now are groups of federally managed or informer-riddled assclowns with khakis, kneepads, and trashcan lids portraying themselves as being on our side. The last time that happened (New Information About the Capitol Riot Demolishes the Media Narrative and Asks Questions That Need To Be Answered), there was a demonstration in the Capitol, Ashil Babbitt was executed in cold blood, and Roseanne Boyland was beaten to death.