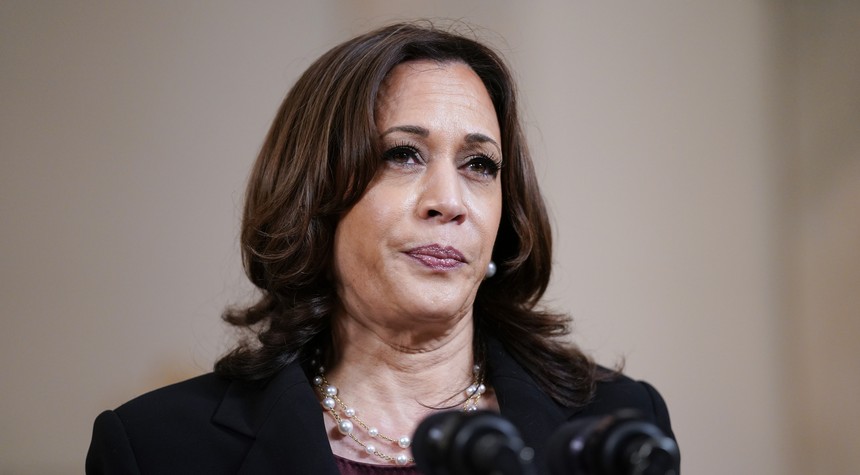 These are truly extraordinary times in which we are living. Not the good kind of extraordinary either. While we are being subjected to the worst president in the history of this once-great Republic, standing right behind him waiting for the job is the most unlikeable woman in America not named Hillary Clinton.

Purported Vice President Kamala Harris has largely been kept out of the spotlight by the cabal running joe Biden’s brain. That’s a bit of a mystery, since almost any time that she gets a few minutes near a camera it distracts everyone from how much of an unmitigated disaster her boss is. You’d think that they would want to be getting her as much face time with the American public as possible.

Kamala Harris is so unpopular even with her own party that she had to drop out of the 2020 Democratic presidential race in 2019. Marianne Williamson lasted longer than Harris did, and she spends most of her free time huffing essential oils with her cats.

Harris is a virtual non-talent who could only have reached the heights she has by starting in California. Democrats don’t have to be competent in the Golden State, they merely have to meet the right money people early in their careers and success is practically guaranteed. The 2020 presidential campaign was the first time she had to compete away from the comfort of deep blue California and she was a spectacular flame-out.

Like most modern Democrats who have been very successful, Harris is still a bitter ingrate who would prefer to bash the history of the United States because it makes them popular with the commie crowd.

A.J. wrote yesterday about a speech Harris gave which was heavy on the “America Worst” theme:

Echoing revisionists on a serious topic she knows little about, Harris denounced European explorers who discovered the Americas during her speech.

“Since 1934, every October, the United States has recognized the voyage of the European explorers who first landed on the shores of the Americas,” she said, as if quoting from the anti-American writings of Howard Zinn. “But that is not the whole story. That has never been the whole story. Those explorers ushered in a wave of devastation for Tribal nations — perpetrating violence, stealing land, and spreading disease. We must not shy away from this shameful past, and we must shed light on it and do everything we can to address the impact of the past on Native communities today.”

Have some more whine why don’t you, Madame Vice President.

The most Kamala Harris-y thing to happen so far this year has to be the painfully awkward video of her talking to some kids about space. Harris isn’t relatable to Americans of any age, so they hired child actors to play her rapt audience. The whole thing was so “nails on a chalkboard bad” that Team Biden’s Brain is insisting it wasn’t involved with the cheesy waste of taxpayer money.

In June I wrote that the mainstream media can’t spin away Harris’s constant cringe-worthy behavior. Bless their hearts, they keep trying. Her scripted, manufactured moments — like the video — are rough to watch. Her genuine moments are even worse, full of condescension and cackling whenever she is caught off guard, which is often.

Even hardcore partisan Democratic operatives must spend most of their days saying “Why in the hell did we pick these two?” to themselves on a loop.

I really miss the days when House Speaker Granny Boxwine was the worst one over there.