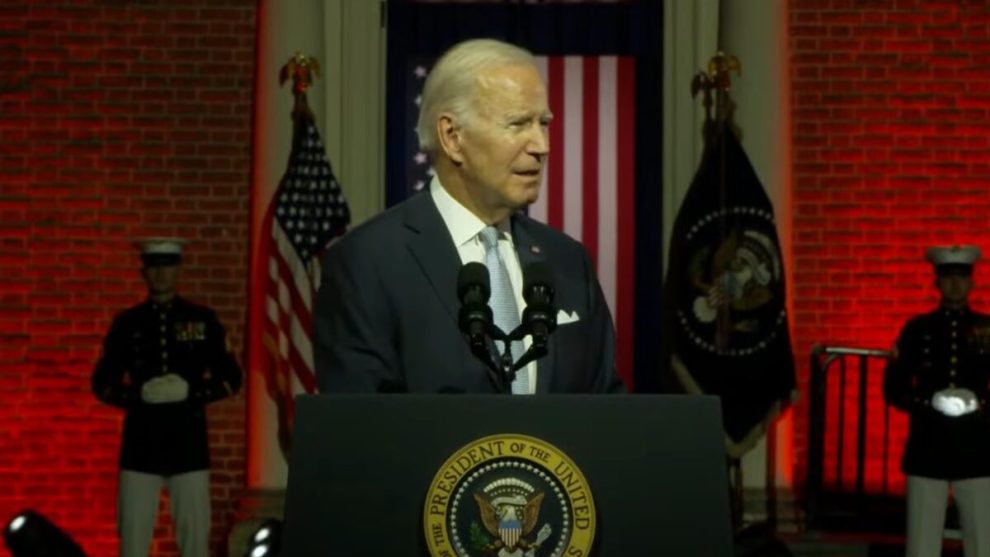 Joe Biden is getting all kinds of backlash from the despicable speech he delivered last night at Independence Hall in Philadelphia, attacking millions of Americans who want to “Make America Great Again” and supporting President Donald Trump.

We covered some of the hot takes, with many people comparing his unprecedented attacks to Communist or Nazi-like tactics, Biden acting like the fascist he was accusing others of being. They also hit on the visuals with the improper use of the Marines and the evil blood-red backdrop.

Among the hot take was Trump who chastised Biden for essentially threatening Americans and saying if Biden doesn’t want to make America great again he shouldn’t be representing America. Trump also called going after Americans like that insane.

Even CNN bashed Biden for the use of the Marines in such a speech. On the other hand, CNN also reportedly softened the look of the visuals so it didn’t look as bad.

But now Biden seems to be trying to walk it back a bit. Or maybe he just can’t even remember what he said the night before. Now he’s trying to say he was only talking about people who called for “violence.” That of course was a lie, that is not what he said during the speech or the whole prior week. It means he knows now that he screwed up and went too far.

Doocy: "Do you consider all Trump supporters to be a threat to the country?"

Biden: "I don't consider any Trump supporter a threat to the country." pic.twitter.com/QB7f3XVG7z

“I don’t consider any Trump supporter to be a threat,” Biden said to Fox’s Peter Doocy. “I do think anyone who calls for the use of violence and fails to condemn violence when its used, refuse to acknowledge an election when it’s been won… That is a threat to democracy.” Oh, so you mean like the Democratic reaction to when Trump won in 2016, when they tried to suborn electors, boycotted his inaugural, when Democrats refused to accept he won, and leftists rioted in the streets on Jan. 20, 2017? When have the Democrats ever called out any of that? Biden didn’t condemn any of that, indeed, he encouraged the perception that Trump was not a legitimate president.

If Joe Biden actually meant what he is going to say in tonight's speech, he'd fire @PressSec @K_JeanPierre https://t.co/rTIKfuiAH0

But we know Joe Biden doesn't mean what he says. During the 2020 campaign, Biden told a woman "I absolutely agree" that Donald Trump is an illegitimate president pic.twitter.com/7zwYcEZWv0

Too late, we heard what you said, you very much were attacking all those people who did nothing to deserve it, who aren’t violent or extremist, but whom you essentially declared Enemies of the State.

Biden today: "I don't consider any Trump supporter a threat to the country."

Biden last night: "Donald Trump and the MAGA Republicans represent an extremism that threatens the very foundations of our Republic." pic.twitter.com/lO8rVceUQd

Biden today: "I don't consider any Trump supporter to be a threat to the country."

So he just wants us to pretend he didn’t say it and ignore everything he said last night? What kind of ridiculous administration is this? They can’t even do evil oppressive government right, they’re that messed up.

But you know what a failure this all was when he immediately has to backtrack from it the next morning.