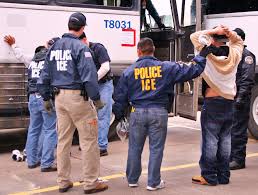 The woman who was charged with confronting a man wearing a “Make America Great Again” hat inside a Falmouth Mexican restaurant is now in ICE custody. The department said she was in the country illegally.

Police said Rosiane Santos walked by Bryton Turner as he was eating dinner at Casa Vallarta and knocked the hat off his head. She then allegedly confronted him verbally.

Turner recorded video showing some of the confrontation.

Falmouth Police charged Santos with disorderly conduct following the incident earlier this month. On Tuesday, ICE took her into custody.

“Deportation officers with ICE’s Fugitive Operations Team arrested Rosiane Santos, an unlawfully present citizen of Brazil, today near Falmouth, Massachusetts,” said ICE spokesman John Mohan. “Santos is currently facing local charges for assault and other offenses. She is presently in ICE custody and has been entered into removal proceedings before the federal immigration courts.”

Turner said he was just trying to eat a nice meal when Santos grabbed his hat supporting President Trump.

See also  Fauci Touts the 'Fauci Effect,' Suggests He Symbolizes 'Integrity' and 'Truth'
→ What are your thoughts? ←
Scroll down to leave a comment: