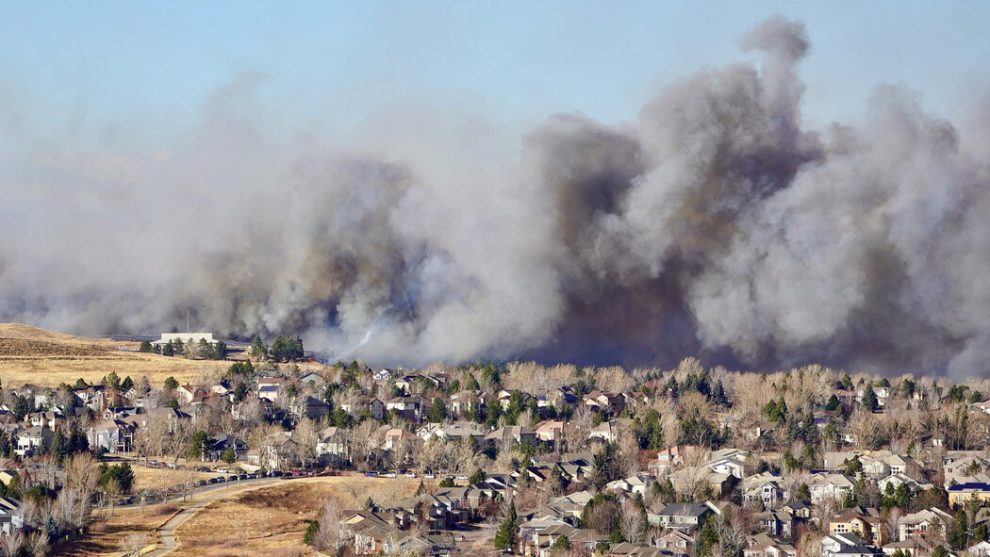 Wildfires have torn their way through Colorado over the past 48-hours leaving tens of thousands of people homeless, countless properties destroyed and a state of emergency declared late Thursday night.

AP reports at least one first responder and six others were injured, though Boulder County Sheriff Joe Pelle acknowledged there could be more injuries and deaths could be possible due to the intensity of fires that quickly swept across the region as winds gusted up to 105 mph.

The fast-moving fires are burning in Boulder County, north of Denver, and officials say deaths and injuries are likely as the blazes spread further.

Some 30,000 people in the towns of Louisville and Superior were told to leave their homes on Thursday.

Meanwhile, a state of emergency has been declared by Governor Jared Polis.

“This fire is not so much a question of resources,” he told a press conference, as reported by the BBC. “This fire is a force of nature.”

“We hope that the winds die down, that the weather changes,” he added. “But for those who are directly affected, know that you don’t stand alone.”

Wind gusts of over 100 miles an hour have been reported in some places, fanning the flames and complicating firefighting efforts by preventing aircraft from taking to the skies.

The activity of the fires, which are burning unusually late into the winter season, will depend on how the winds behave overnight and could determine when crews are able to go in and begin assessing the damage and searching for any victims.

“This is the kind of fire we can’t fight head on,” Pelle said. “We actually had deputy sheriffs and firefighters in areas that had to pull out because they just got overrun,” he added.

Evacuations have been ordered for the city of Louisville, home to about 21,000 people, and Superior, which has another 13,000 residents.

Some 370 homes went up in flames west of Superior and 210 were lost in the Old Town area of Superior, Pelle said, with some of the several blazes in the area reportedly sparked by downed power lines.

A shopping complex and hotel were also fully engulfed.

One video taken outside a supermarket showed a dramatic scene confronting departing shoppers as winds ripped through the car park.

This video from Colorado’s Marshall fire is terrifying. pic.twitter.com/AWqBvs9lWX

According to the Colorado Sun, the region has experienced a historically dry season, leaving grass, shrubs and trees parched.

The season’s first significant snow — typically seen months earlier — is forecast for Friday and Saturday. Officials expressed hope that the weather would be more favorable for firefighters Friday.