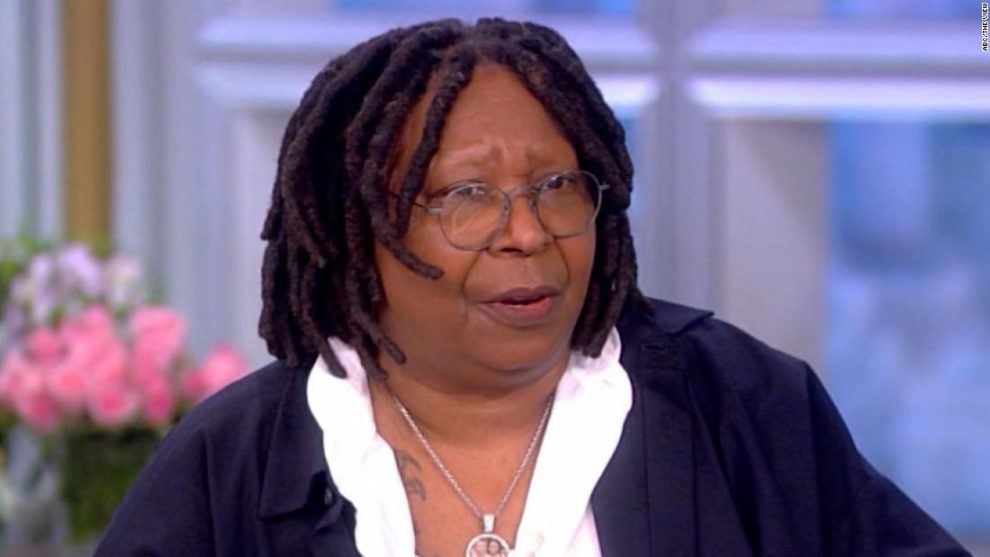 “Let us not forget when we talk about what needs to happen, all the folks that need to apologise,” Goldberg told the audience of The View.

Goldberg went on to incorrectly suggest that Prince Charles had previously apologised for slavery during his trip to Barbados in November 2021, claiming this was his way of “releasing the hold that Britain has” over Barbados.

However, while the Prince of Wales acknowledged “the appalling atrocity of slavery” he did not apologise for it, GB News reports — perhaps unsurprisingly, given he was born in 1948, well over 100 years after abolition.

The 66-year-old chatshow host’s comments come after Prince William and his wife faced protests calling for the removal of Queen Elizabeth II as Jamaica’s head of state during their visit to the island nation as part of a royal tour celebrating the Queen’s Platinum Jubilee.

Protestors held provocative anti-royal signs including messages such as “Go back home”, “Princesses and Princes belong in fairytales… not in Jamaica”, “apologise”, and calls for reparations.

Members of the Caribbean island’s Rastafarian community also accused the royals of profiting from the “blood, tears and sweat” of Jamaican people — despite Britain having given Jamaica tens of millions of pounds worth of financial aid just since 2017.

“Critical Race Theory is a divisive, toxic ideology that stirs up racial tensions. It’s a self-perpetuating cycle of hatred. The worst thing is, you can never be woke enough — these theories force people to attack themselves and each other”, Robinson said.

“Take for example, Whoopi Goldberg, clearly not her real name. By the rules of CRT, Caryn Elaine Johnson has culturally appropriated a Jewish name. For that, should she apologise for her ‘white supremacy’?” Robinson suggested.

“Aren’t we getting a little tired of celebrities and their virtue signalling? Didn’t Whoopi learn her lesson the last time she engaged in politics and ended up having to apologise for her anti-Semitism?”

Goldberg was suspended from ABC for two weeks following outlandish remark in which she said the extermination of six million Jews in the Holocaust was “not about race”.

“Let’s be truthful, the Holocaust isn’t about race, it’s not. It’s about man’s inhumanity to man, that’s what it’s about. These are two groups of white people,” Goldberg said in what some saw as an effort to diminish the suffering faced by the Jewish people because of their perceived status as “white”.

Malema appeared to admit that he views white people as a collective group, not as individuals, which warrants them to be “punished for the sins of their parents” https://t.co/1kGNjCWeZj

“It’s revealing of Goldberg’s political acumen, or lack of it, that she thought racism could only be practised by White on Black,” commented Dr Zareer Masani, a historian and former BBC producer.

“She’d obviously missed out on Holocaust or World War 2, not to mention racism between different shades of yellow, brown and black, not to mention reverse racism against whites,” Masani continued, suggesting: “Perhaps she should have read the matrimonial columns of any Indian newspaper, with their stipulations for skin colour.”

Luke Doherty, the Chairman of think tank the Orthodox Conservatives Group, told Breitbart London that Goldberg’s “criticism of the Royal Family on the issue of slavery” was “a dull and tiresome virtue signalling tirade”.

“It reflects the insanity of the postmodern, decolonisation lobby and their obsession with punishing people in the present for crimes and indiscretions of the past. Nobody alive today is materially responsible for slavery; and the mere fact of being related to somebody who was, does not justify this sort of attack,” Doherty added.

Britain in fact played a key role in stamping out the slave trade worldwide after abolishing it in 1807, paying a high price in both money and lives to arm the Royal Navy’s anti-slaver West Africa Squadron and, later, to bring the Barbary corsairs of North Africa — who had preyed primarily on European sailors and coastal communities for hundreds of years — to heel.

Multi-millionaire Whoopi Goldberg is tackling the key issue in amid the Chinese coronavirus crisis. https://t.co/FLkQxGTkjT

See also  James Woods Blows the Doors Off Dem Effort to Shut Him Down on Twitter
Share this article: