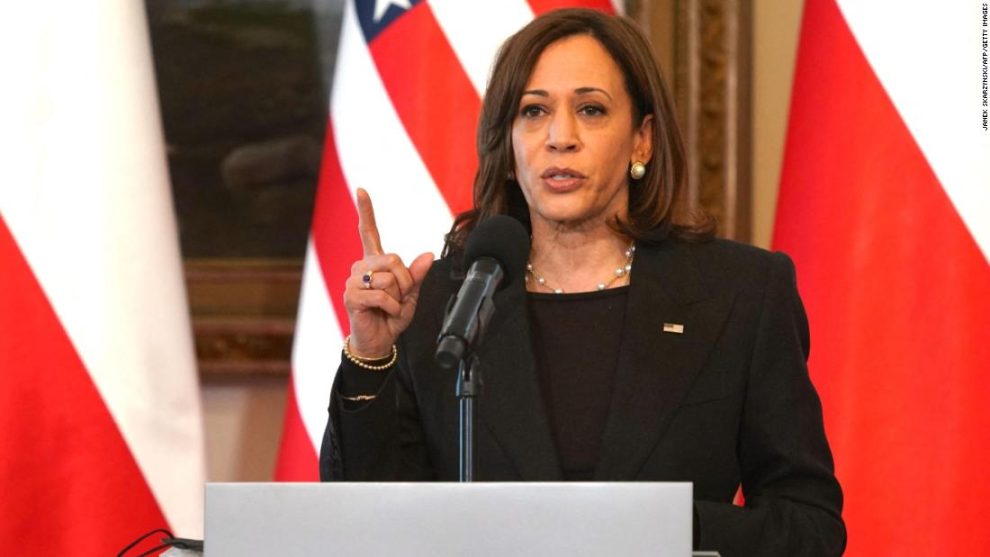 When it comes to Kamala Harris, they really are putting words in her mouth.

The worst vice president since Joe Biden held the job has already established herself as being in deep over her head when it comes to handling any of the position’s responsibilities, but she’s shown a special knack for ineptitude when it comes to matters of foreign policy.

In a speech over the weekend, she proved it so badly that the official White House transcript had to be doctored to cover it up.

Speaking at the Democratic National Committee’s winter meeting at the Washington Hilton in D.C., Harris kicked off her speech with the usual glad-handing of domestic politics (“shout out to the Californians …”) before briefly touching on her recent trip abroad and the vicious war of aggression Russia is waging against Ukraine.

She should have left it untouched.

Kamala thinks Ukraine is part of NATO.
Just when you thought you knew how unqualified she is, she lowers the bar even further. pic.twitter.com/52XCAXwFv2

As most people who take even a casual interest in world events probably know, the invasion was sparked at least in part by Russian President Vladimir Putin’s opposition to Ukraine joining the North Atlantic Treaty Organization, the military alliance that helped defeat the evil empire of Putin’s beloved Soviet Union.

Maybe Harris doesn’t take even a casual interest in world events — beyond getting private-jet service to European locales. Her speech at the DNC event suggested she thinks Ukraine already is a part of NATO, a misunderstanding so grave that revisionists on the White House briefing desk had to rewrite a bit of history.

“So I will say what I know we all say, and I will say over and over again: The United States stands firmly with the Ukrainian people in defense of the NATO alliance.”

That’s what CNN heard. That’s what Business Insider heard. It’s what the transcriptionists at Grabien heard.

But it’s clearly not what the White House wants posterity to remember, because after someone realized just how grave an error Harris had made, the White House transcript of her errant sentence included the word “[and]” — as though she said something she hadn’t.

“So I will say what I know we all say, and I will say over and over again: The United States stands firmly with the Ukrainian people [and] in defense of the NATO Alliance. (Applause.)”

And plenty of social media users weighed in on the error and the correction.

UNBELIEVABLE…..JUST ADD WORDS TO A TRANSCRIPT TO MAKE IT SAY WHAT YOU WANT, NOT WHAT VP EMBARRASSMENT SAID….
THAT IS THE UTMOST IN #transparency….🙄

Why do they even let this idiot speak? https://t.co/BKyuCgFFW4

Just over a year into the Biden presidency, it gets more painfully clear every day what a disaster for this country the election of 2020 presented.

Whatever it was about former President Donald Trump that discomfited liberal (and even some not-so-liberal), white, suburban women, whatever it is in his earthy, patriotic followers that evokes scorn from elitists on the left and the right, it never came close to the disgrace the Biden administration foists on the country every day – very much including its painfully inept vice president.

Granted, this is the Biden administration, where the ability to speak and think clearly isn’t exactly at a premium, considering the doddering septuagenarian at the top of the bill.

But this isn’t a “Saturday Night Live” skit, and Kamala Harris isn’t just a screeching progressive occupying a safe California Senate seat or trying to assassinate the character of Supreme Court nominees. She’s a vice president who’s supposed to be helping lead the greatest country the world has ever known through a dangerous time.

The unfortunate fact, though, is that it’s the president she serves, and the administration she’s part of, that has made the world infinitely more dangerous than it was when Trump was in the White House (there’s a reason Putin didn’t invade anyone on Trump’s watch).

At this point, even Harris has to know she’s out of her league — it’s obvious enough to everyone else (like her discontented, fleeing staff).

Thanks to the Founders, voters will get a chance to render a verdict on the Biden administration and the Democratic Party in the November midterm elections – and every American who loves this country will make sure to turn out the vote.

In two years more, there will be a chance to correct the historic error.

Until then, there are only two words anyone can put into Harris’ mouth that would really help.

It might do the country — and Harris herself — a world of good.