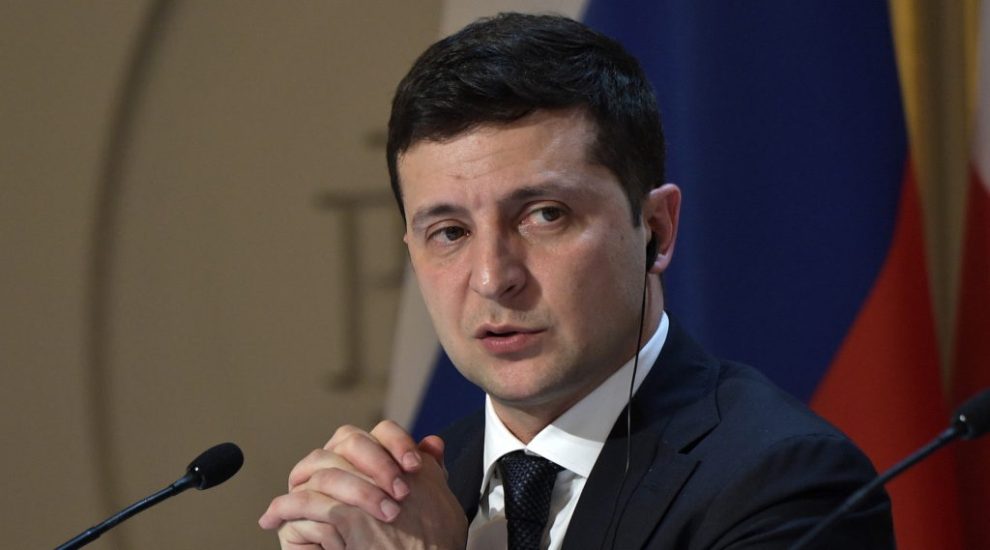 The Biden administration confirmed early Wednesday morning Ukrainian President Volodymyr Zelenskyy is on his way to the U.S. to discuss more assistance for the country during its ongoing conflict with Russia.

In addition to meeting with President Joe Biden, Zelenskyy is slated to address Congress Wednesday afternoon as lawmakers plan to shell out more money for Ukraine in its latest $1.7 trillion spending bill. The budget includes more than $45 billion in new military and humanitarian aid for his country.

A press statement from the Biden admin Wednesday morning said Zelenskyy’s address to a joint session of Congress will demonstrate the “strong, bipartisan support for Ukraine.”

“The visit will underscore the United States’ steadfast commitment to supporting Ukraine for as long as it takes, including through the provision of economic, humanitarian, and military assistance,” the statement read.

In its official statement, the White House added President Biden has been rallying the world to support Ukraine since the Russian invasion in February.

“Three hundred days ago, Russia launched a brutal assault against Ukraine. In response, President Biden rallied the world to support the people of Ukraine as they defend their sovereignty and territorial integrity,” the statement read. “During the visit, President Biden will announce a significant new package of security assistance to help Ukraine defend itself against Russian aggression.”

Zelenskyy is scheduled to meet with President Biden at 2 p.m. Wednesday on the South Lawn. From there, the two will move to a bilateral meeting in the Oval Office. The schedule ends with Zelenskyy’s Congressional address at 4:30 p.m.

Zelenskyy’s office also released a statement Wednesday morning confirming travel to the U.S. was underway, adding that the Ukrainian president just returned from a visit with the frontline defenders in Bakhmut:

“On Dec. 21, in Washington, he will meet with U.S. President Joseph Biden, with whom he will discuss comprehensive cooperation between the two countries, in particular with regard to strengthening the resilience and defense capabilities of Ukraine, supporting its sovereignty and restoring territorial integrity.

“The Head of State will also deliver a speech at a joint session of the two chambers of the U.S. Congress and hold a series of bilateral meetings.”

On my way to the US to strengthen resilience and defense capabilities of 🇺🇦. In particular, @POTUS and I will discuss cooperation between 🇺🇦 and 🇺🇸. I will also have a speech at the Congress and a number of bilateral meetings.

Extensive security measures were already underway in the nation’s capital early Wednesday morning as the District prepared for the high-profile visit.

As early as 4:30 a.m., Capitol Police cruisers could be seen lined up outside the Capitol building along with cement barricades blocking roads leading up to the building.

On behalf of bipartisan Congressional leaders, Speaker of the House Nancy Pelosi, D-Calif., sent a letter to Zelenskyy encouraging his visit to Washington, D.C. in a letter explaining the leaders’ “immense respect and admiration” for the Ukrainian president.

“In the face of Putin’s horrific atrocities, Ukrainian freedom fighters have inspired the world with an iron will and an unbreakable spirit — fighting back against Russia’s brutal, unjustified invasion,” Pelosi wrote. “During this dark moment, your courageous, patriotic, indefatigable leadership has rallied not only your people, but the world, to join the frontlines of the fight for freedom.”

The pending aid would be the U.S.’s largest amount of financial assistance to Ukraine since the war started and is intended to support the fight against Russia for months to come, according to the Associated Press.

Congress is also expected to announce a major package of $1.8 billion in military aid on Wednesday, which will include a Patriot missile battery and precision guided bombs for Ukraine’s fighter jets.

U.S. officials said the package will include about $1 billion in weapons from Pentagon stocks and $800 million in funding through the Ukraine Security Assistance Initiative, according to the AP.

Though the massive spending bill is expected to receive support from many Republicans in the House and Senate, not all are on board with the additional funding. Some GOP lawmakers argued the new round of aid, which will bring the U.S. commitment to the war to over $110 billion, is improper without greater accountability.

“We should have a separate vote on additional Ukraine funding,” said Rep. Thomas Massie, R-Ky. “Most of my constituents do not wish to have their money sent to Ukraine, especially not without oversight or an audit.”

On the other hand, Senate Minority Leader Mitch McConnell, R-Ky., said most Republicans agree that sending assistance to Ukraine in the country’s fight with Russia is the United States’s top priority.