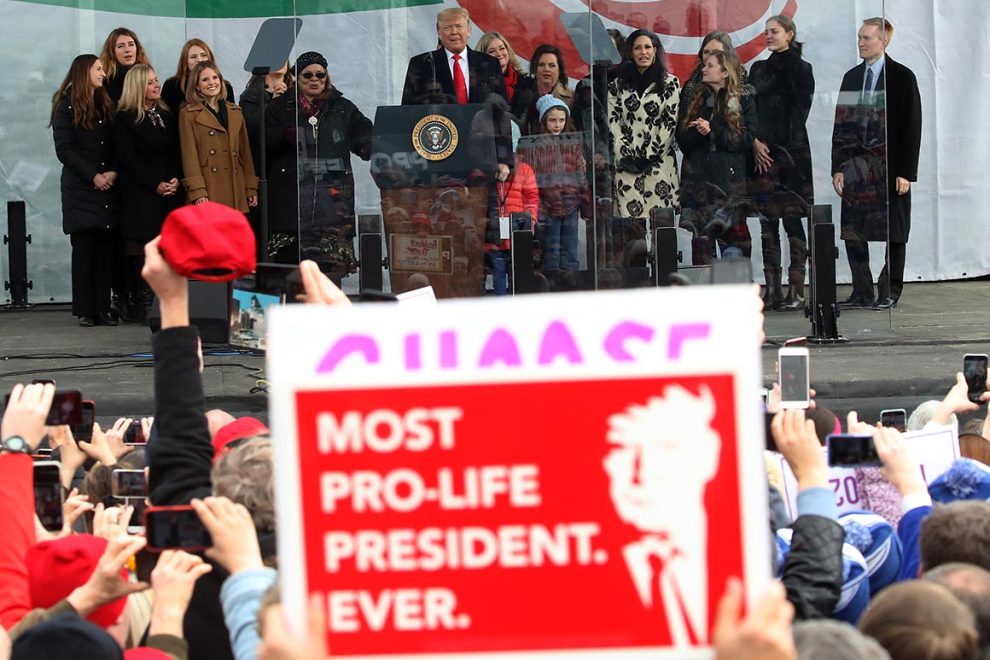 2023 is off to a resounding start, with the most pro-life president of the post-Roe v. Wade era blaming pro-lifers for the Republicans’ disappointing showing in the midterm elections. After being widely blamed for that poor showing, Donald Trump struck back on New Year’s Day, writing on Truth Social: “It wasn’t my fault that the Republicans didn’t live up to expectations in the MidTerms. I was 233-20! It was the ‘abortion issue,’ poorly handled by many Republicans, especially those that firmly insisted on No Exceptions, even in the case of Rape, Incest, or Life of the Mother, that lost large numbers of Voters. Also, the people that pushed so hard, for decades, against abortion, got their wish from the U.S. Supreme Court, & just plain disappeared, not to be seen again. Plus, Mitch stupid $’s!”

The singular achievement of the Trump presidency was the appointment of three pro-life Supreme Court justices who finally rid the nation of Roe v. Wade, which even the Left’s Supreme Court heroine Ruth Bader Ginsburg acknowledged was poorly reasoned, on thin (at best) Constitutional foundations, and simply bad law. Donald Trump, despite the shortcomings of his superabundantly publicized personal life, won the enduring gratitude of pro-lifers by laying the foundation for the removal of that exercise in judicial tyranny. The Dobbs decision came courtesy of the justices he appointed, and restored to each individual state the right to determine its abortion laws, and to outlaw it if a majority saw fit to do so. As a result, the relentless sacrifices to Moloch have actually eased in some areas.

It would be reasonable to think that any candidate responsible for such an achievement would run on it, and run on it hard, but Trump is busy running the other way. He claims that “the ‘abortion issue’” was “poorly handled by many Republicans, especially those that firmly insisted on No Exceptions, even in the case of Rape, Incest, or Life of the Mother, that lost large numbers of Voters,” and yet there simply were no such candidates in the 2022 midterms. Not a single Republican was out there running on the idea that abortion must be banned when the life of the mother is at risk. The question of whether a mother should kill her child if her own life is in danger, rather than sacrifice her life so that her child may live, is a separate question; the fact remains that this was simply not an issue for anyone in 2022. So what is Trump talking about?

Trump also apparently believes that pro-life positions cost Republicans at the polls. Yet even a cursory glance at the record shows that not to be the case. After the Dobbs decision, Trump’s bête noire, Ron DeSantis, vowed to expand pro-life protections. Yet DeSantis won nearly 60% of the vote as he was reelected governor of Florida in November 2022. Brian Kemp once tweeted: “I’m pro-life and unapologetic about it. During my time as Secretary of State, I sued the Obama Justice Department twice – and won – to keep illegals from voting. As governor, I’ll do what it takes to have the strongest pro-life, anti-abortion laws in the country.” Yet in 2022, he once again defeated the perennial rising star of the Democrat party and the establishment media, supermodel Stacey Abrams. And it’s the same all over the country: the strongest pro-life candidates, including Mike DeWine in Ohio and Greg Abbott in Texas, won their 2022 elections. So whom is Trump talking about?

There is likewise no actual evidence for Trump’s claim that pro-life voters “got their wish from the U.S. Supreme Court, & just plain disappeared, not to be seen again.” The media spent the summer and fall boasting that young women, eager to abort their children, would swing the election hard to the Left; although the Republicans underperformed, this was not due to any pro-abortion wave, but to the effects of gerrymandering and mail-in ballots. Republican candidates actually secured a decisive national popular vote advantage, but due to Democrat and RINO chicanery, this didn’t translate into seats.

Trump was certainly correct, however, that “Mitch’s stupid $” was a baneful influence on the elections, but this was an ancillary point that many others have made, and certainly didn’t outweigh the significance of the pro-life president abandoning and criticizing his own base. Trump has apparently decided to try to appeal to the Romney/Cheney establishment Republicans, a strategy that is almost certainly doomed to fail, as they hate him passionately and immovably, and his move to the Left will only alienate his core supporters.

This is a great shame. Trump was a remarkably effective president. In my book Rating America’s Presidents. I gave him the highest possible rating. But is Trump himself aware of what made his presidency so successful? At this point, the answer to that question is unclear at best.