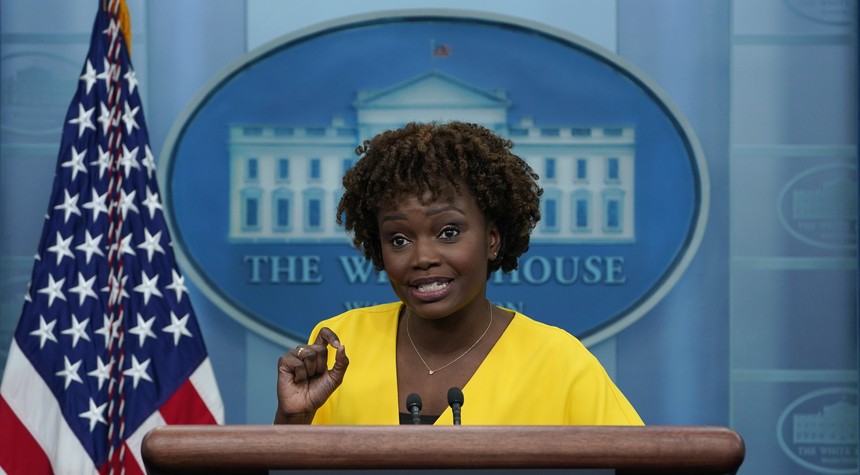 As we noted earlier, we’re not hearing from Joe Biden’s doctor personally during the White House briefings. We’re getting translations of what he’s saying or written statements from the doctor. What this does is prevent reporters from being able to thoroughly question the doctor on any concerns about Biden. Meanwhile, we’re being told embarrassing things that make it sounds like we have a toddler in the office — including that Biden “cleaned his plate” and ate all his dinner.

I wanted to share this additional video from White House Press Secretary Karine Jean-Pierre, who insisted to the reporters that they have heard “directly” from the doctor because they got a letter from him, while the reporters insisted that’s not hearing directly from him.

REPORTER: "Why are we not hearing from Dr. O'Connor on this?"

KJP: "You've heard directly from him."

KJP: "Yes you have. You've heard from the letter. That is hearing directly from him." pic.twitter.com/OHbMqw9ke8

The more they try to prevent the doctor from talking to the reporters, the more you have to wonder why. They even seem to be ticking off the normally incurious White House correspondents. What is the Biden team trying to hide?

If Joe Biden has COVID, he should be doing all he can to rest and recover. Instead, his team is trying to convince us that everything is normal; they said he’s working an eight-hour day. Heck, I don’t think he worked an eight-hour day when he was well.

But he should be taking it easy and not working when he’s sick; he’s 79 years old. But they had him sitting up in a suit for a remote meeting and quite frankly, to me — who has been covering him for a while and is used to how he normally looks — he looked awful.

COVID-infected Joe Biden reaches for a cough drop as staff talk to him via video about high gas prices pic.twitter.com/qKItD0QAiu

He looks like he’s not well, and out of it, not absorbing anything that’s being said; his eyes just have sort of a vacant look. He coughed his way through the meeting and took a cough drop during the video clip; he had a notably deeper voice. His doctor had said that he had a slight temperature, but his respiration and oxygen saturation numbers were in the normal range.

We’ve talked about people thinking it was elder abuse, putting him in this position with the various issues he has. Add to that now, he is being made to look like he’s still involved and on top of things — it just looks cruel and frankly, not good for his health. If you need to show a proof of life shot, show him resting in bed. That’s what he should be doing at his age if he has COVID–not being in meetings.

Reporters tried to question how he was during that meeting and wouldn’t you know it, the video went out. Funny how that happens. Although before it did, Biden did give a thumbs up.

"How do you feel?" :videos stream cut: pic.twitter.com/7gcR9auKMm

But once again, why are they cutting off the video and ushering the press out? How much worse do they think he could look at this point?