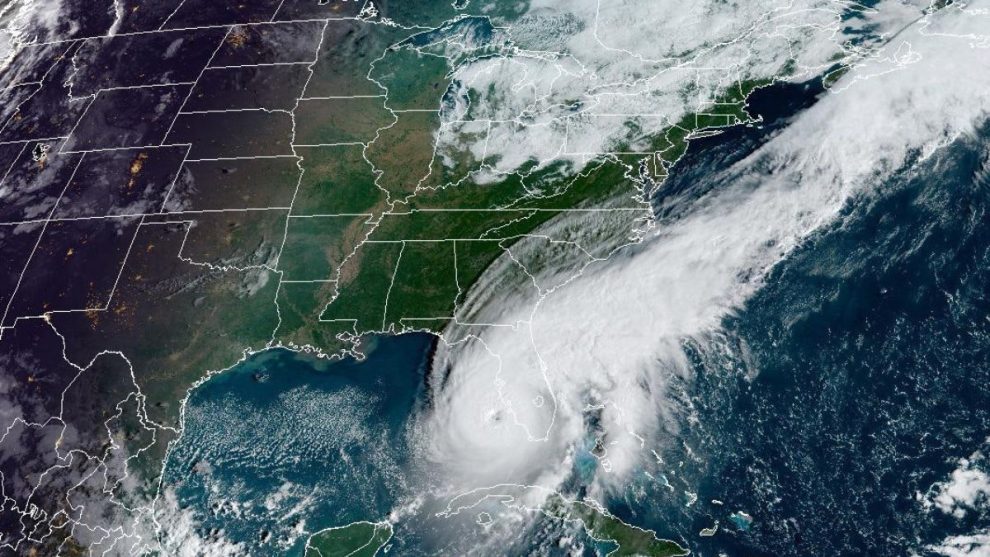 The National Hurricane Center said on Thursday that officials expect Hurricane Ian to become a hurricane once again.

Hurricane Ian made landfall Wednesday on the Gulf Coast of Florida at nearly the strength of a Category 5 storm. With winds exceeding 150 miles per hour, the storm was tied for the fourth-strongest hurricane to ever hit the Sunshine State, according to data from Colorado State University meteorologist Philip Klotzbach. As of Thursday morning, however, winds had weakened to 65 miles per hour and rendered the system a tropical storm.

According to a forecast from the National Hurricane Center, the storm has remained more powerful than initial estimates. “Ian has stubbornly gone east of the track forecast for the past couple of days and has moved back over water faster than expected,” the agency said. “A mid-level shortwave rough moving southward across the southern United States should turn Ian northward overnight and north-northwestward on Saturday.”

Because Ian is now expected to move over the Gulf Stream for a longer duration, the storm will be able to maintain its central convection, while an “increased pressure gradient on the northwestern side from a stationary front” near the southeastern United States will increase wind speeds.

“We now expect Ian to become a hurricane again by this evening,” the agency continued. “It is worth noting that Ian is forecast to have atypical structure when it nears the southeastern United States, and strong winds will extend well ahead of the center, even on the northwestern side.”

The National Hurricane Center, therefore, issued a hurricane warning for the entire coast of South Carolina and added that “there is a danger of life-threatening storm surge” through Friday in northeastern Florida, Georgia, and South Carolina.

Multiple regions of the Sunshine State over which the storm has passed — including Hardee County, DeSoto County, and Lee County — are experiencing power outage rates approaching 100%. Most outages are concentrated in central Florida, with minimal outages in the western portion of the state and some outages in the Miami area. More than 2.5 million people in Florida were left without power on Thursday morning as utility companies began work to repair the state’s electrical grid.

The city of Naples — located in Collier County, where most residents are also without power — issued a boil water notice “out of an abundance of caution” amid systemwide water pressure problems. “It is advised that all water used for drinking and cooking be brought to a rolling boil for one minute,” a statement said. “Or, as an alternative, bottled water may be used.”

Governor Ron DeSantis (R-FL) issued a warning to residents who had not yet evacuated as of Wednesday morning. “It’s time to hunker down and prepare for this storm,” he advised. “Do what you need to do to stay safe. If you are where that storm is approaching, you’re already in hazardous conditions. It’s going to get a lot worse very quickly. So please hunker down.”

DeSantis likewise announced that he requested complete disaster reimbursement from the federal government to ensure that Florida can “quickly move forward into response and recovery.” The state government has mobilized 42,000 linemen, 7,000 National Guardsmen, and 179 aircraft to handle the hurricane response.