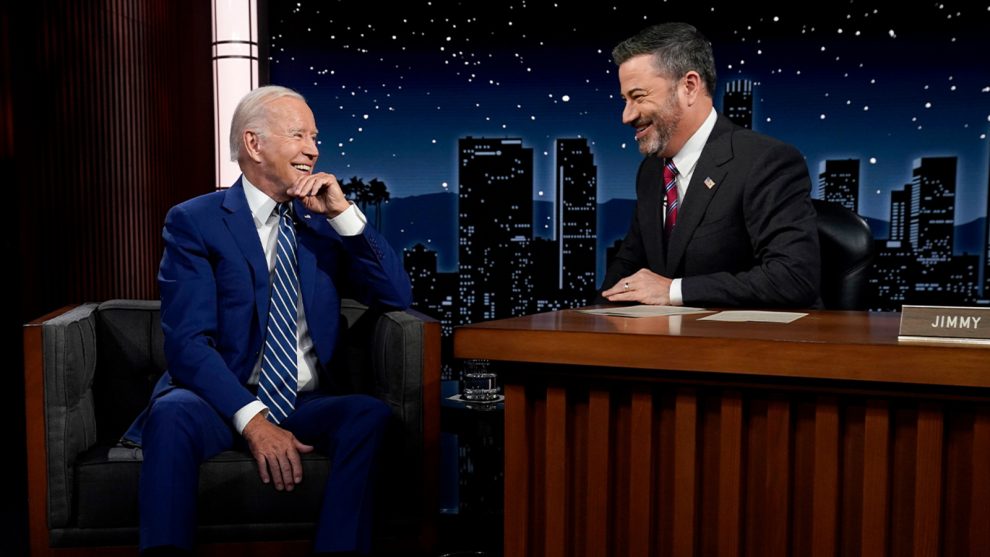 Jimmy Kimmel’s ABC late-night show is the perfect venue for President Joe Biden to be pitched a few softballs. And, on Wednesday, that’s mostly what happened.

Kimmel has made his political opinions known, and they skew to the left. He’s part of a new breed of talk show host that feeds off of applause and right-think more than comedy. So, while there might not have been many laughs when Biden appeared, it went off mostly smoothly. The questions were mostly easy, the discussion mostly went off as if it were scripted.

The key word there: Mostly. At one point, Kimmel stumbled upon an inadvertent truth — there’s no reason whatsoever for the president to be optimistic.

That inadvertent truth came after a whole lot of posterior-kissing by Kimmel, sparked by Biden’s promotion of his plan to hike taxes on corporations and to give Americans an expensive child-care handout.

“It all makes perfect sense. And the fact that this makes sense is why it doesn’t make sense, and why it seems so crazy, and that we have so many problems, and that maybe it’s just that Americans aren’t as knowledgeable as they should be,” Kimmel said.

“Or maybe there’s a Death Star pumping false information into our brain –” he continued, which prompted Biden to interject, “Fox, right?”

“Yeah. Or maybe it’s always been this way,” Kimmel continued.

“Here in L.A., a small fraction of people voted in the primary yesterday and then everybody wants to complain about everything, and it’s just enough already. And I think you need to start yelling at people, is really what I think.”

Hilarious. So basically, people are stupid and need to start listening to President Yelly-Shouty. Unfortunately, we have President Rambly-Gaffy, as Biden proved by blabbering about the pandemic, how proms and graduations got canceled, how we’re a country experiencing mental health issues and how “the bottom line is, I think, that we’ve seen such a radical shift in one party and the ability of that party to — that minority of — the MAGA folks.”

“But I’ve never been more optimistic in my life. So I tell you why,” Biden said.

Then, the moment of inadvertent truth: “Why are you so optimistic? It makes no sense!” a mock-frustrated Kimmel said.

“No, it does. Look at the kids. Look at the young people, best educated, least prejudiced, most giving generation in American history,” Biden said.

“Turn on the television here, turn on, no, I’m serious.”

Kimmel was joking — a rarity for him, if I’m to judge by the few times I’ve watched his show. He picked a bad time to start.

On Saturday, according to data from the American Automobile Association, the average price of a gallon of gas topped $5 for the first time. On Friday, the U.S. Bureau of Labor Statistics reported inflation in May hit 8.6 percent, the highest number in over 40 years.

Russia continues to pound Ukraine. Iran announced it was removing cameras from its nuclear sites, a move that could finally scuttle the nuclear deal. Both have come thanks, in part, to the administration’s projection of weakness abroad.

In the month of May, there were mass shootings in Uvalde, Texas and Buffalo, New York. The White House wants to grab the guns of law-abiding Americans, despite no evidence that would have stopped the attacks from happening.

Yes, our country does have mental health issues — particularly over pandemic lockdowns encouraged and promoted by Biden’s party, the Democrats.

The only reason to be optimistic about the American body politic is the fact midterm elections are approaching. For once, Jimmy Kimmel was right: Biden’s look-on-the-bright-side attitude makes no sense at all, particularly when the president is the one responsible for so much of the pain.