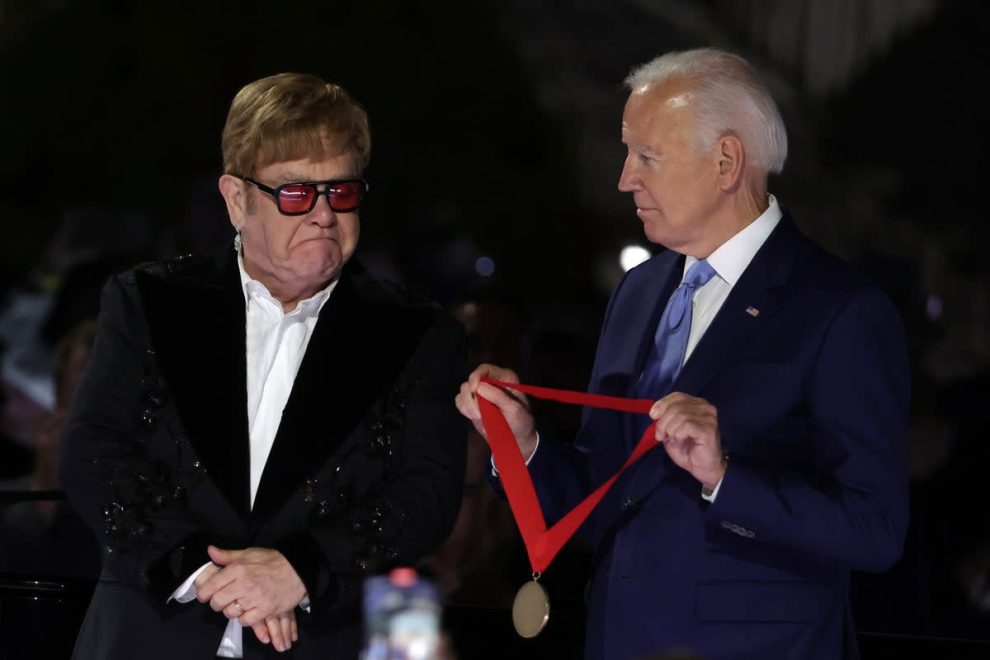 It might be nice, just for variety’s sake, to write a story about a comment made by the sitting U.S. president that he actually meant to make.

Alas, it looks like I’m going to have to wait for President Joe Biden’s replacement to take office before that’s likely to happen.

Last night was no exception, when Biden, speaking to an audience at the White House at the end of a performance by pop music legend Sir Elton John, appeared to blame the singer for the AIDS epidemic, or wasteful taxpayer spending, or… something.

“By the way, it’s all his fault that we’re spending $6 billion in taxpayer money this month to help fight HIV/AIDS,” Biden said, in what I’m sure was meant as a compliment but came out sounding like censure.

It looked like John himself might have had to take a moment to process what the president meant:

John is on a seemingly endless “farewell tour,” and, according to The New York Times, “his appearance was part of a larger celebration that was meant to honor people whom the White House called ‘everyday history makers’: teachers, nurses, emergency and mental health workers, students and activists.”

(The Times ran the story under the headline, “Elton John, a Favorite of Trump, Performs at the Biden White House.” They really just can’t help themselves, can they?)

The president took the occasion to present John with the National Humanities Medal, which “honors individuals or groups whose work has deepened the nation’s understanding of the humanities and broadened our citizens’ engagement with history, literature, languages, philosophy, and other humanities subjects,” according to the National Endowment for the Humanities website.

I’m not sure how John has done any of that, personally, though I like his music in general. In fact, even Biden’s comments seemed to suggest that the medal was more of an acknowledgment of the singer’s contributions to the fight against HIV and AIDS, though there are probably more fitting awards for that kind of thing.

Fans will remember John’s collaboration with Gladys Knight, Dionne Warwick and Stevie Wonder on the Grammy-winning “That’s What Friends Are For,” a single recorded in 1986 to benefit the American Foundation for AIDS Research. Again, I’m not sure the song was Grammy-worthy, but the effort was certainly deserving of some sort of recognition.

He also worked to raise money for the World Health Organization’s COVID-19 Solidarity Response Fund, which helped “track and understand the spread of the virus; to ensure patients get the care they need and frontline workers get essential supplies and information; and to accelerate research and development of a vaccine and treatments for all who need them,” according to WHO’s website.

John, of course, is best known as a musician, with such hits as “Philadelphia Freedom,” “Bennie and the Jets,” “Tiny Dancer,” “Candle in the Wind” … I could go on for a long time. If you can’t name an Elton John song, my listing for you here probably won’t help.

And don’t even get me started on “The Lion King.”

Point being, the man is a musical legend, whether you like his stuff or not. He deserved a little more respect than a poorly worded compliment from the U.S. president that sounded like he was being blamed for personally infecting millions of homosexual men with HIV.

But I guess he too will have to wait for Biden’s replacement to take office before that’s likely to happen.