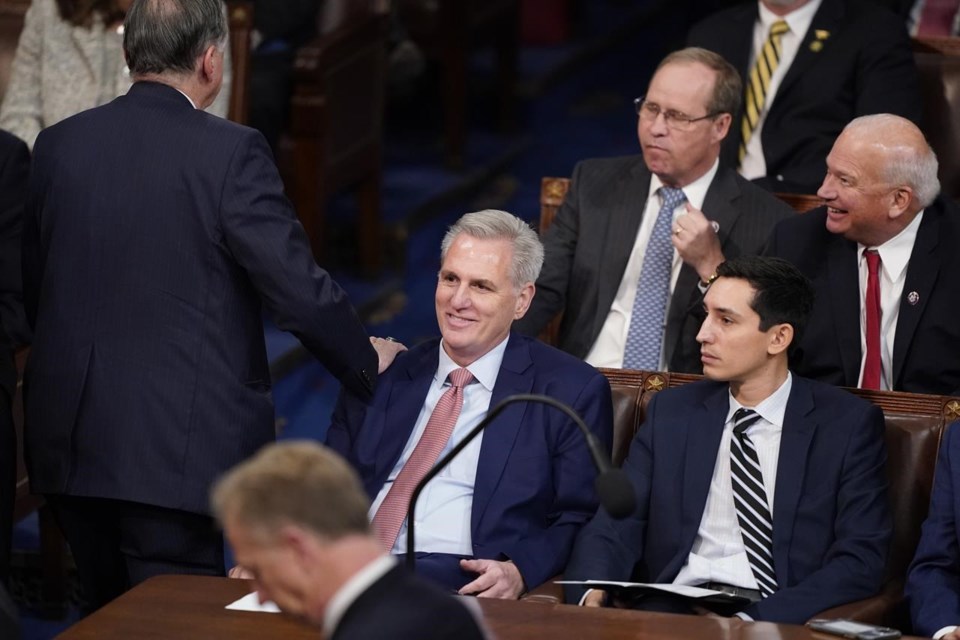 Rep. Warren Davidson (R-OH) nominated Leader Kevin McCarthy (R-CA) for the speakership Wednesday on the fifth speakership ballot, after the fourth did not produce a victor.

Davidson highlighted a laundry list of concessions that McCarthy promised many Republicans who have repeatedly voted against him, and he urged those members to rally behind the California representative.

“We’re on the precipice of such a destructive argument today. I plead with all, all of my Republican colleagues, let cooler, more rational heads prevail. Let us unite as Republicans to elect the next speaker of the House,” said Davidson.

He then asserted that 20 of his colleagues, many of whom are part of the House Freedom Caucus (HFC), have repeatedly voted against McCarthy because they do not trust him, adding:

What can heal that divide? Right now, there are a lot of colleagues that don’t trust 20 or more of my fellow Republicans. Right now, though we remain divided, a majority, an actual majority of the House Freedom Caucus members do support Kevin McCarthy.

Davidson, a member of the HFC himself, noted that over the summer, the caucus “started the negotiations with a proposal for new rules,” including “a set of tools that could be structured to make trust more verifiable and allow recourse if that trust is ever broken.” He added that McCarthy engaged in the talks following the election and “led the Congress to adopt substantive reforms that will make our majority more effective.”

He then listed a number of the rules that McCarthy adopted at the request of those representatives who have repeatedly voted against him:

Among other adoptions, Davidson cited the revival of the Holman Rule and “an end to the Gephardt rule” to reign in runaway debt, as well as a new rule worked out with Rep. Morgan Griffith (R-VA) on single subject bills that Davidson said the GOP hopes “to call the Griffith Rule.”

Additionally, he highlighted the promise of “diverse viewpoints on every committee” and a “Church-style commission” attached to the Judiciary Committee, set to be chaired by Rep Jim Jordan (R-OH), to investigate collaborations between the government and big tech “to silence, persecute, or even prosecute our fellow citizens.”

“We, as Republicans, are a big and diverse conference. The real question goes back to strategy,” Davidson later added. “Can we accept incremental process? Can we work for a victory one first down at a time, or can we only accept the high-risk trick plays?”

“Can we take a win every and then and give hope to the forgotten men and women of America who no longer believe this people’s house cares about them,” he wondered.

The fifth ballow ultimately did not yield a speaker and brandished the same results as the fourth round, with McCarthy at 201 votes, Democrat nominee Hakeem Jeffries (D-NY) with all 212 Democrat votes, while 20 Republcians voted for Rep. Byron Donalds (R-FL). One representative voted present.