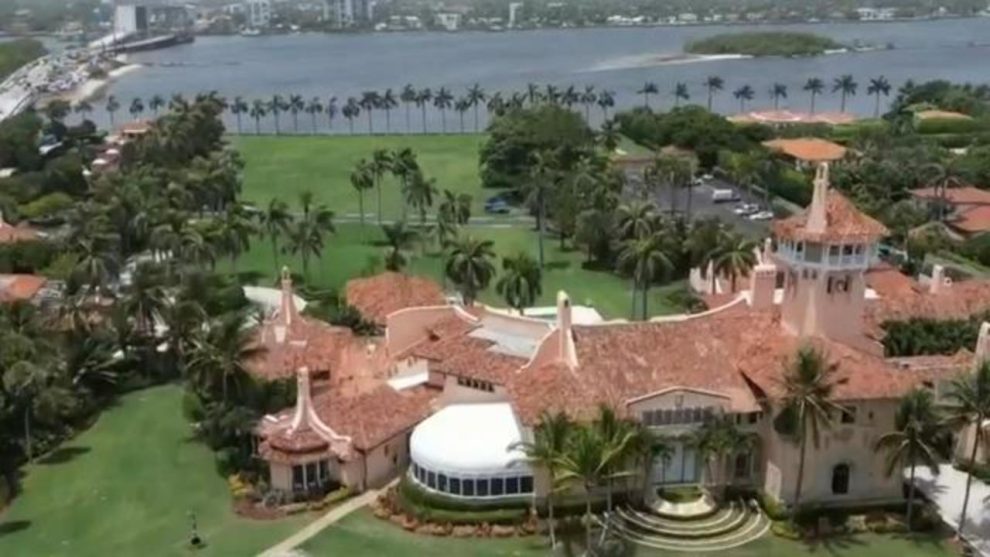 The warrant that authorized the search of former President Donald Trump’s residence at Mar-a-Lago shows it was issued by U.S. Magistrate Judge Bruce Reinhart on Aug. 5, 2022, at 12:12 p.m.—nearly three full days before the Justice Department and FBI conducted a raid to execute it.

The raid did not occur until the morning of Aug. 8, 2022, when federal agents from the FBI arrived at Mar-a-Lago to execute the search warrant.

The document, obtained and reviewed by Breitbart News, shows that the DOJ and FBI waited several days after Reinhart approved the warrant to conduct the raid, something that severely undercuts the talking points issued by Attorney General Merrick Garland in a public statement on Thursday when he broke his silence to discuss the matter in televised remarks.

Why the authorities waited several days to execute service of the warrant if the matter rose to such a serious national security issue is unclear. If what federal agents intended to obtain from the raid was such a risk to national security, the fact they decided to linger and wait for several days before executing is likely to become a major point of contention as this debate plays out in front of the public.

Garland announced in his public remarks on Thursday that the Department of Justice had moved to unseal the warrant and inventory list of documents obtained from the raid. Trump indicated in public statements on Thursday evening that he would support such a move and wants the documents out in public. It is expected these documents, including the warrant that has been reviewed by Breitbart News, will be made public by the court soon, later on Friday or in the coming days.

See also  ‘I Got That’: Biden Claims People Who Are Hurting Because Of Inflation Need To ‘Put This In Perspective’

The documents obtained by Breitbart News include the warrant, two accompanying attachments specifying terms for the warrant, and a property receipt outlining the inventory federal agents seized from Mar-a-Lago.

The inventory list of what was seized—or the receipt part of the document—is three pages long and constitutes two separate receipts, one that is two pages long and another that is one page long. Both receipts were signed by Trump’s attorney Christina Bobb and dated on Monday Aug. 8, 2022, at 6:19 p.m. The longer receipt was signed by FBI Special Agent Jeremy Linton and the shorter receipt was signed by the name: “I. Grady Gary” and includes the title SSA. SSA means Supervisory Special Agent. [NOTE: This part of this story has been updated after the correct spelling of Gary’s name, which was unclear from the handwriting on the document, has been confirmed.]

The first receipt lists out 28 numbered items, including some that have sub-headers. Some of the items are actually named like item number 1 which says it was an “Executive Grant of Clemency re: Roger Jason Stone, Jr.” or 1A which says it is “Info re: President of France.”

Others like item number 2 are less specific. That item says it is a “Leatherbound box of documents.” Item 2A says it contained “Various Classified/TS/SCI documents.”

Item number 3 says it was a “potential presidential record,” and items numbers 5 and 6 both say they were a “binder of photos.”

Item number 7 says it was a “handwritten note,” and items 8, 9, and 10 were boxes labeled A-1, A-12, and A-15 respectively. Item 10A specifies that that item allegedly contained “Miscellaneous Secret Documents.”

The rest of the receipt document is similar and unspecific—explaining that several boxes, some allegedly containing various documents of various classifications—were among the rest of the items the FBI seized per this receipt.

The second receipt is much shorter, and less specific. The first item on that one just says “documents,” and the rest are just numbered boxes.

Another interesting fact from the warrant is that Judge Reinhart gave the Justice Department and FBI a lot of time to execute it. While the DOJ and FBI took their time–waiting three days to do it–technically the document says that Reinhart authorized the feds to wait even longer all the way until next Friday on Aug. 19 to execute it. While we still do not have the underlying affidavits that represent what the FBI and DOJ took to the judge to seek and gain his approval for the warrant, that seems to indicate that the judge did not think this is so serious that immediate or urgent action was needed to be taken as he gave the authorities two full weeks–or 14 full days–in which to execute the warrant.

Attachment A to the warrant delineates where the agents can search and where they cannot at Mar-a-Lago. Specifically, it says that agents could search the “45 Office,” and “all storage rooms, and all other rooms or areas within the premises used or available to be used by” the former President of the United States [the document uses the abbreviation FPOTUS] “and his staff and in which boxes or documents could be stored, including all structures or buildings on the estate.” This attachment does however said agents are not authorized to search areas “currently (i.e., at the time of the search) being occupied, rented, or used by third parties (such as Mar-a-Lago members) and not otherwise used or available to be used by FPOTUS and his staff, such as private guest suites.”

All of this is technically irrelevant anyway because Trump–who as president has original and absolute declassification authority–said he declassified all of these documents. “Number one, it was all declassified,” Trump said on Truth Social moments ago. “Number two, they didn’t need to ‘seize’ anything. They could have had it anytime they wanted without playing politics and breaking into Mar-a-Lago. It was in secured storage, with an additional lock put on as per their request.”