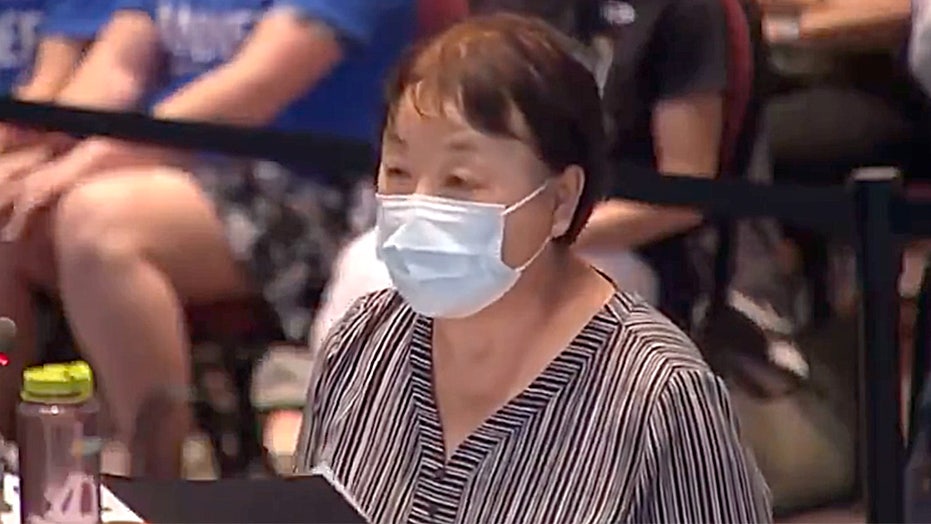 A Virginia mom who endured Mao Zedong’s Cultural Revolution before immigrating to the U.S. ripped a Virginia school board at a public meeting Tuesday over its stubborn support of the controversial critical race theory.

“I’ve been very alarmed by what’s going on in our schools,” Xi Van Fleet told the Loudoun County School Board members. “You are now teaching, training our children to be social justice warriors and to loathe our country and our history.”

She likened CRT, which critics deride as a form of “neo-racism,” to China’s Cultural Revolution, a Mao-led purge that left between 500,000 and 20 million people dead from 1966 to 1976. The estimates vary greatly and many details have been shrouded in secrecy for decades.

Watch a brave parent who grew up in Mao’s China point out all of the identical traits b/n the Cultural Revolution and what LCPS, and really every school system, are doing through the use of CRT. pic.twitter.com/zH7XuyBmW6

Van Fleet, whose son graduated from Loudoun High School in 2015, shared some of her experience growing up in China’s Sichuan province with Fox News exclusively Wednesday evening.

The Cultural Revolution began when she was 6 years old, she said, and immediately pitted students and teachers and against one another by hanging “Big Posters” in hallways and the cafeteria where students could write criticisms against anyone deemed ideologically impure.

“One of the teachers was considered bourgeoisie because she liked to wear pretty clothes,” Van Fleet said. “So the students attacked her and spit on her. She was covered with spit… and pretty soon it became violence.”

To me, and to a lot of Chinese, it is heartbreaking that we escaped communism and now we experience communism here.

— Xi Van Fleet
Communist squads would raid homes and destroy any relics of China’s past culture, history, governments or religion, she said.

“Everything that was considered ‘old,’ feudalist, a vase, Buddhas, everything was taken out and smashed,” she said.

There were thought crimes, too.

“We were asked to report if we hear anything about someone saying anything showing that there’s a lack of complete loyalty to Mao,” she said. “There were people reporting their parents, and their parents ended up in jail.”

At 26 years old, she said, she finally made it out, traveling to the U.S. – where she immediately found freedoms she had never been able to enjoy before.

“I felt like it’s such a free country, meaning I have free access to all sorts of information – books on both sides of the issues,” she said.

In the current political and cultural climate in the U.S., however, she said she felt some of that freedom eroding.

“I can’t really just say what I mean, even though the other side can say whatever,” she said. “To me, and to a lot of Chinese, it is heartbreaking that we escaped communism and now we experience communism here.”

In her speech to the school board, which officials made her shorten to fit the one-minute limit, she drew direct parallels between what she saw back then in China and what she sees in the United States today.

“The Communist regime used the same critical theory to divide people,” she said. “The only difference is they used class instead of race.”

I just want Americans to know that their privilege is to be here living in America, that is just the biggest privilege.

— Xi Van Fleet
She said she witnessed students and teachers “turn against each other” during the pogrom and saw schools change their names “to be politically correct.”

“We were taught to denounce our heritage, and Red Guards destroyed anything that is not communist…statues, books and anything else,” she continued. “We were also encouraged to report on each other, just like the Student Equity Ambassador program and the bias reporting system.”

“This is indeed the American version of the Chinese Cultural Revolution,” she said. “The critical race theory has its roots in cultural Marxism. It should have no place in our school.”

Her speech came 246 years after fellow Virginian Patrick Henry declared “Give me liberty or give me death” during the Second Virginia Convention in Richmond, 125 miles to the south of Loudoun.

“I just want Americans to know that their privilege is to be here living in America, that is just the biggest privilege,” Van Fleet said over the phone Wednesday. “I do not think a lot of people understand. They are thinking they are doing the right thing, ‘be against racism’ sounds really good. But they are basically breaking the system that is against racism.”

One of the teachers was considered bourgeoisie because she liked to wear pretty clothes. So the students attacked her and spit on her.

— Xi Van Fleet
The Loudoun County school board has doubled down on its embrace of left-wing policies, including CRT, in recent months.

Illustrating Van Fleet’s point, a group of Loudoun County parents and teachers were accused of “racketeering” and intimidating conservative parents who raised questions about the radical proposals. Members of the “Anti-Racist Parents of Loudoun County” allegedly compiled a list of outspoken conservatives in their community in order to track, hack and “doxx” them – or even scare them into self-censorship, according to David Gordon, director of the Virginia Project, a Republican PAC.

Earlier this week, a judge ordered the district to reinstate suspended elementary school phys ed teacher Byron “Tanner” Cross after he was punished for speaking his mind during the public comment portion of a hearing on new transgender policies last month.

Cross declared that he wouldn’t “affirm that a biological boy can be a girl and vice versa because it’s against my religion. It’s lying to a child, it’s abuse to a child, and it’s sinning against our God.”

He was speaking out against a district policy proposal that would require teachers and other school staff to address “gender-expansive or transgender students” with their preferred name, pronouns and gender.

Ian Prior, the father of two students attending Loudoun schools, said Van Fleet’s remarks to the school board “should serve as a stark warning” Wednesday.

“I think for a while now, school systems have really put this stuff in the schools right under our very noses, and we just weren’t aware,” he said. “When your kids go to school and you let them go through those doors, you’re trusting the school system to do the job that they’re’ supposed to do…And it took a pandemic and all the information that parents could see with this distance learning to understand exactly what was going on.”