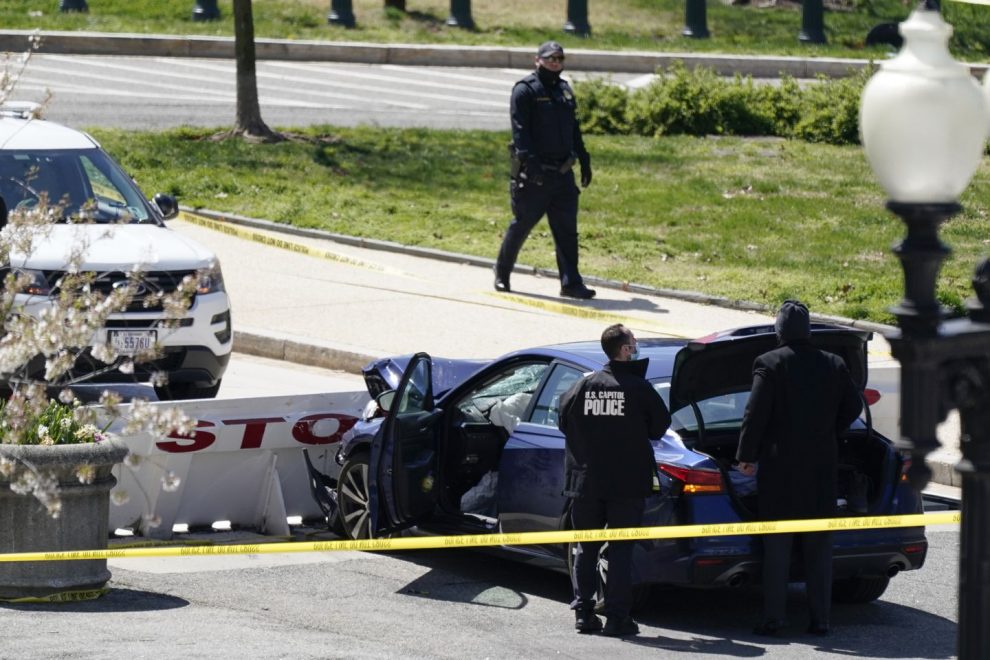 The U.S. Capitol complex was placed on lockdown Friday after a vehicle attempted to ram through a barricade, killing one Capitol Police officer and wounding another, according to law enforcement. The suspect is also dead after being shot by police.

*Follow all of the events on the Breitbart News Live Wire below. All times in eastern.**

► The U.S. Capitol was put under lockdown due to an “external security threat”

► A suspect attempted to ram a vehicle into a U.S. Capitol barricade

► The suspect is also dead

*VIDEO* the suspects car remains right at a barrier near the senate side of the #Capitol. Trunk is open. @wusa9 pic.twitter.com/iAHHo2qKNs

No word yet from WH on Capitol incident and officer's death. Biden is at Camp David.

You can hear the announcement here that the lockdown at the Capitol has concluded. pic.twitter.com/KUODytZ8O3

House Speaker Nancy Pelosi has ordered flags at the Capitol be flown at half-staff in honor of the US Capitol Police officer who died from his injuries after being rammed by a vehicle, per her spokesperson.

The suspect who rammed a car into a Capitol barricade was not on file with Capitol Police, and there is no indication of a connection to any members of Congress, acting police chief says https://t.co/Upe8dIHzqr pic.twitter.com/3X8DolC4CK

BREAKING: Acting U.S. Capitol Police chief on Capitol incident: "It is with a very, very heavy heart that I announce one of our officers has succumbed to his injuries." https://t.co/oct9CmdItF pic.twitter.com/gB3rq0IHW6

Fox is told Capitol Suspect had large knife. Something between a kitchen knife and a machete. Charged at officers. Was then shot

Capitol Police doing a press briefing at 2:45pm on incident at the Capitol: https://t.co/HmJhS7Xi37

BREAKING: Law enforcement sources tell @ABC News a suspect is dead after an encounter with Capitol Police. via @JackDate
and @MLevineReports

Praying for the United States Capitol Police officers who were attacked at the Capitol. We are still learning what’s taken place. Grateful to all the USCP and first responders who are on the scene.

I am praying for the United States Capitol Police Officers that were injured in the line of duty today. These brave officers put their life on the line each and every day to defend our Capitol.

2:00 P.M. — A National Guard presence has formed near the Capitol.

Guard troops heading out with their riot gear pic.twitter.com/tslMFps6jR

At 1:44 p.m. National Guard troops responded to the North Barricade entrance of the Capitol where USCP reports a car struck two officers pic.twitter.com/etTT5M0Wn3

BREAKING: Suspect got out of car with knife and was shot by USCP. Was shot after hitting officers, per ⁦@ChadPergram⁩ ⁦@FoxNews⁩ pic.twitter.com/C7ur2enMtY

BREAKING / NBC News: Three law enforcement officials say the suspect at the U.S. Capitol tried to ram a barrier and then exited their vehicle with a knife and was shot by Capitol police. Reported w/ @jonathan4ny and @PeteWilliamsNBC

1:26 P.M. —USCP has responded to the North Barricade vehicle access point amid reports that an individual rammed a vehicle into two USCP officers. Both officers were wounded. The suspect is in custody. Both the officers and suspect are en route to a nearby hospital for medical treatment.

CRITICAL INCIDENT: USCP is responding to the North Barricade vehicle access point along Independence Avenue for reports someone rammed a vehicle into two USCP officers. A suspect is in custody. Both officers are injured. All three have been transported to the hospital. pic.twitter.com/4TXIdulJc6

Reporters are sharing videos of the scene:

Appears that a car smashed into the barrier. Two people are on stretchers. Can’t see whether it’s an officer or civilian pic.twitter.com/Ud5WYGyKFu

🚨🚨A helicopter just landed on the east front of the Capitol. I’ve never seen anything like this before. ever. pic.twitter.com/LxV0mywRSe

I am on lockdown inside the Capitol complex. Lots of first responders called and a helicopter just landed on the East front pic.twitter.com/7hKjPeX3Ah

1:10 P.M. —U.S. Capitol Police have sent out an alert notifying that Capitol buildings are under lockdown “due to an external security threat.” Staff members have been told they could not enter or exit the buildings.

BREAKING: Capitol Hill is on lockdown due to "external security threat".

Those inside can move around but are told to stay away from window.

See also  Cereal Killer? Feminine Hygiene Brand's 'Period Crunch' Invites You to Eat a Uterus for Breakfast
→ What are your thoughts? ←
Scroll down to leave a comment: